Detection for the Masses 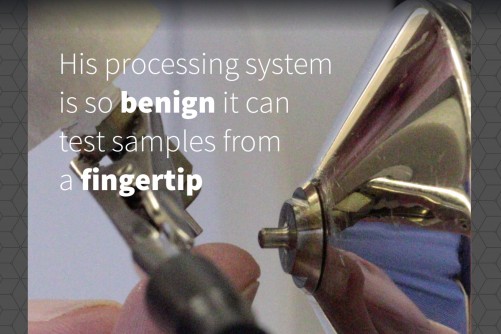 Newswise — Troy, N.Y. – Customs officials want to detect contraband. Doctors want to know how quickly a patient is metabolizing a therapeutic drug. And suppliers of organic products, from nutritional supplements to honey, want to know their raw materials are pure. Each case calls for mass spectrometry – a technique that identifies molecules based on their mass – but current instruments are bulky, expensive, and typically specialize in one class of chemicals, discouraging widespread use outside of a specialized lab setting.

Mass spectrometry is up to the challenge, but better technology is needed to make more flexible instruments. One promising research area uses an atmospheric-pressure glow discharge plasma – a partially ionized gas that can be made stable at room temperature and pressure – to probe samples for elemental and molecular species, and could lead to user-friendly mass-spectrometry analyses with broad capabilities.

“Ideally we want one system that can detect everything, and we want to be able to take that system into the field to test materials on site,” said Jacob Shelley, an expert in plasma-based ambient mass spectrometry instruments who recently joined the faculty at Rensselaer Polytechnic Institute. “We’re trying to make a more flexible instrument that will allow us to detect many things simultaneously. That’s our goal.”

Mass spectrometry takes advantage of the simple truth that atoms of each element, as well as ions and isotopes of those elements, have a unique mass. Therefore molecules – made up of atoms, ions, and isotopes – also have a unique mass. A mass spectrometer uses an electric or magnetic field to measure the mass of a molecule, producing a signal that can be translated into the identity of the chemical species: caffeine is 195; dipheylamine, a chemical sprayed on apples, is 170; cocaine is 304.

The hitch is that current instruments can only process molecules that are in gas state and ionized (possess a positive or negative charge), which means most samples must be processed before they are introduced into the mass spectrometer for analysis. For now, mass spectrometry relies on a variety of time-consuming processing methods that separate and ionize molecules prior to analysis. And depending on the method, samples like foods, pharmaceuticals, or tissue may be destroyed during processing.

The biggest challenge to a generalized processing method is the chemistry needed to ionize the molecule, said Shelley. Most of the methods that have been developed rely on specific chemistries that favor ionization of one class of molecules over another. Shelley is developing a method that takes advantage of the unusual properties and chemistries of plasmas, which are rich in free-moving ions and electrons, and therefore highly interactive. Although the most commonly known plasmas are extremely hot – at nearly 10,000 degrees Kelvin, some plasmas rival the temperature of the sun – Shelley is working with more recently developed glow discharge plasmas, which are stable at room temperature and atmospheric pressure.

In his lab, Shelley demonstrates an experimental instrument so benign it can test samples ionized from a fingertip, and so versatile it can detect species from relatively small trace amounts of metals to large labile biomolecules like peptides and proteins. In developing the technology, Shelley’s research group has used the instrument to detect counterfeit honey, to quantify harmful toxins in freshwater algal blooms, and to screen the raw materials used in nutritional supplements.

“The plasma is useful as an ionization source because it makes a diverse range of chemistries available,” said Shelley. “It may make it possible to ionize a broad class of molecules, which could lead to more generalized instruments.”

Shelley is the Alan Paul Schulz Career Development Professor of Chemistry in the Department of Chemistry and Chemical Biology at Rensselaer. He received a bachelor’s degree in chemistry with a minor in mathematics from Northern Arizona University, and a doctorate in analytical chemistry with a minor in physical chemistry from Indiana University. Prior to joining Rensselaer, he was an assistant professor at Kent State University.

Shelley’s research is enabled by the vision of The New Polytechnic, an emerging paradigm for higher education which recognizes that global challenges and opportunities are so great they cannot be adequately addressed by even the most talented person working alone. Rensselaer serves as a crossroads for collaboration — working with partners across disciplines, sectors, and geographic regions — to address complex global challenges, using the most advanced tools and technologies, many of which are developed at Rensselaer. Research at Rensselaer addresses some of the world’s most pressing technological challenges — from energy security and sustainable development to biotechnology and human health. The New Polytechnic is transformative in the global impact of research, in its innovative pedagogy, and in the lives of students at Rensselaer.