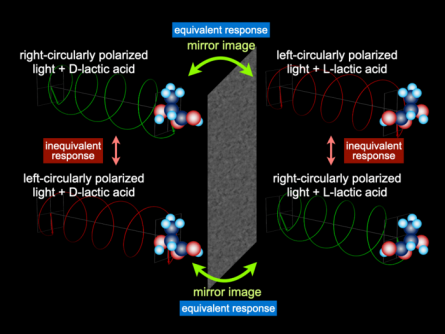 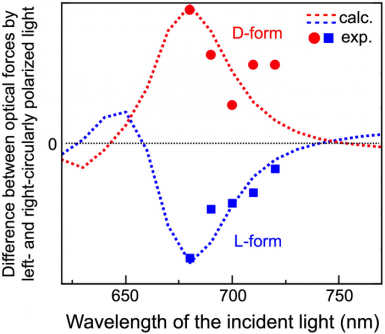 Fig. 3. The plots are the experimental data and broken line are the theoretical calculation. Red and blue in the plots and line represents the D- and L-form nanoparticles, respectively. The optical gradient force was different for D-form and L-form particles.

Newswise — Chirality is the property that the structure is not superposable on its mirrored image. Chiral materials exhibit the characteristic feature that they respond differently to left- and right-circularly polarized light (optical activity, Figure 1). When a matter is irradiated with strong laser light, optical force exerts on it. It has been expected theoretically that the optical force exerting on chiral materials by left- and right-circularly polarized light would also be different.

The present study clarified the characteristics of the circular-polarization dependent optical gradient force on the mechanics of chiral gold nanoparticles. It shows the possibility of separation of chiral materials by the optical force, which may be realized and may extend the applications by using locally confined light generated on nanostructures to trap the materials and/or by utilizing the optical force by other mechanisms.