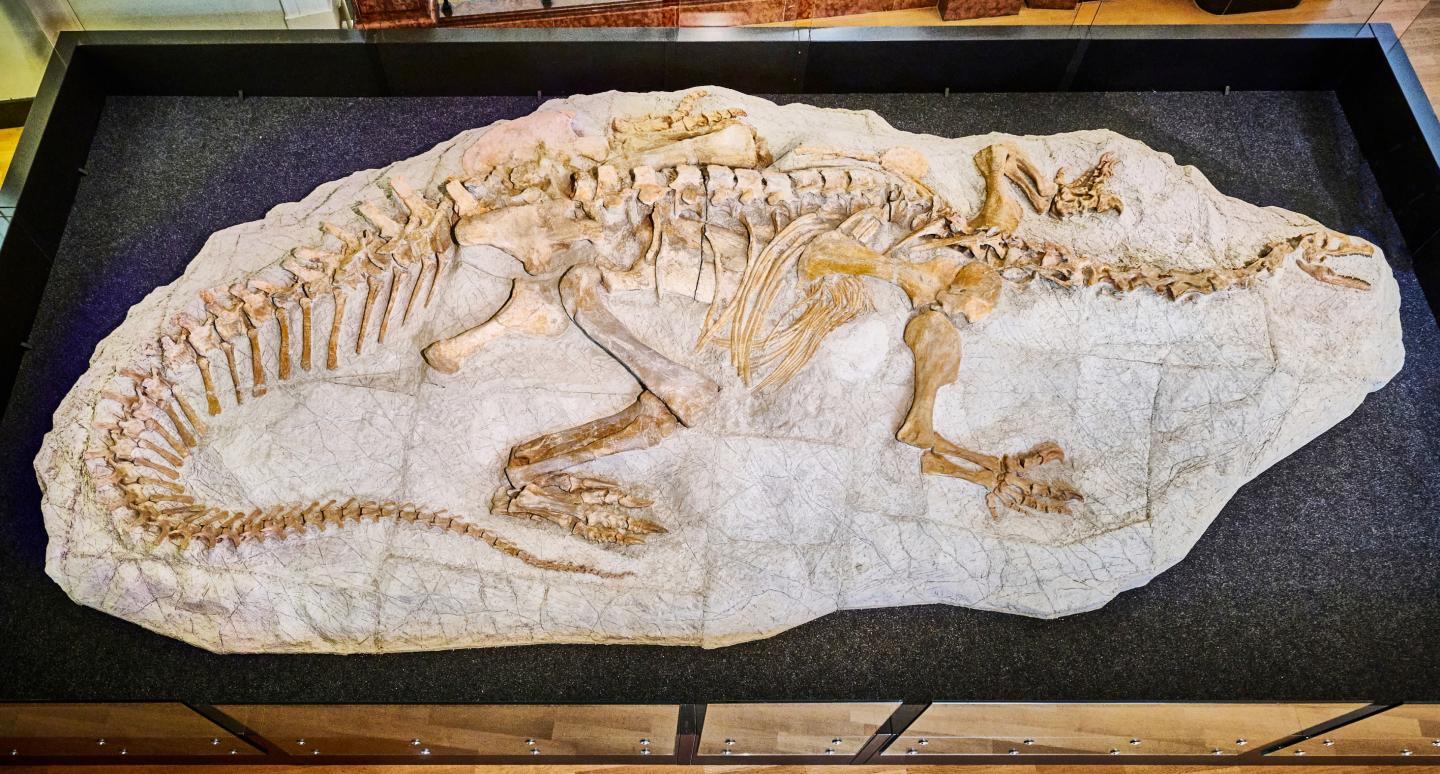 on loan from the Frick Dinosaur Museum, on display at the Zoological Research Museum Alexander Koenig (ZFMK) in Bonn. 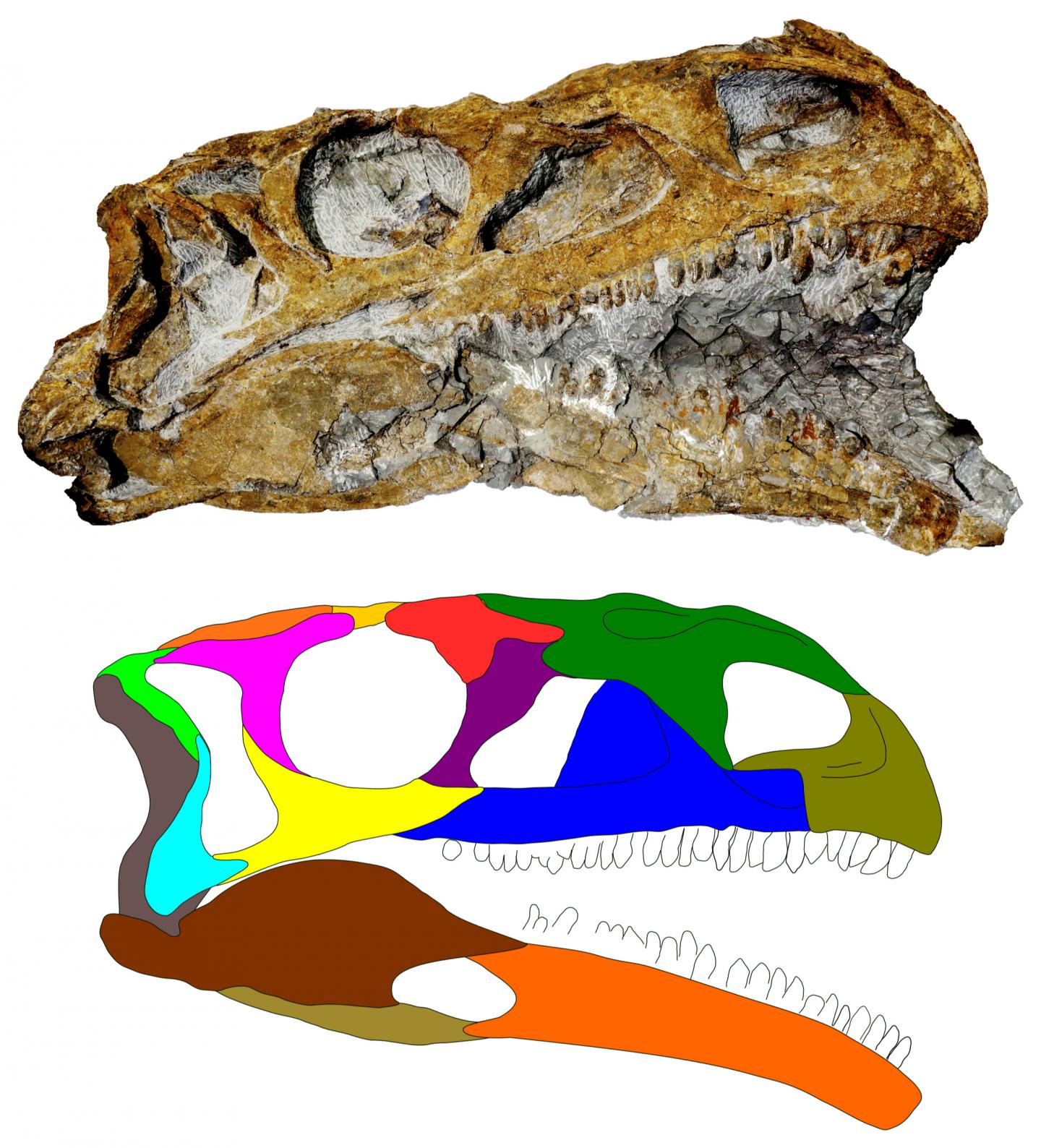 of Plateosaurus trossingensis (top) and a reconstruction of the skull with the different bones highlighted in colour (bottom). 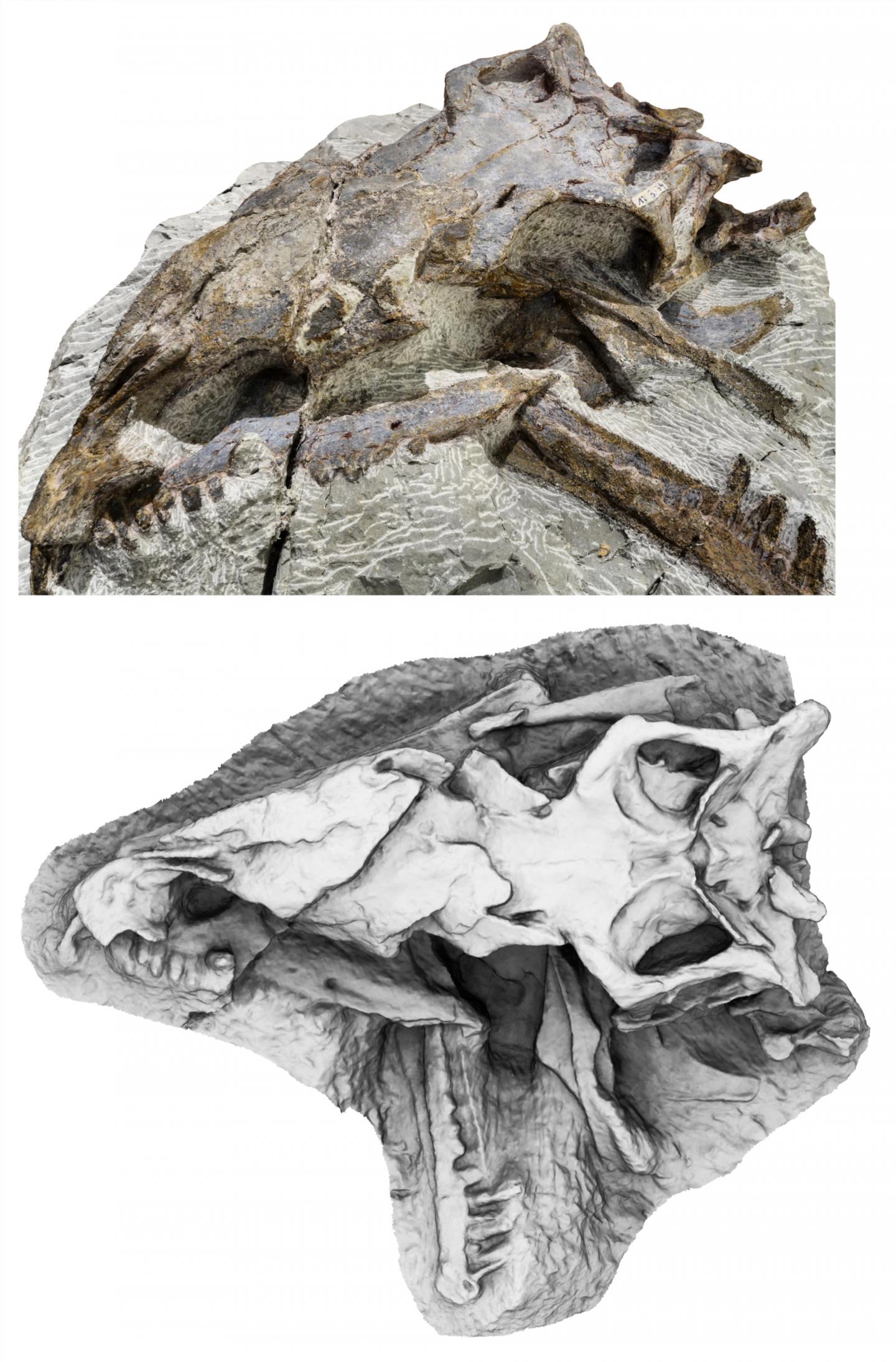 of a Plateosaurus trossingensis skull deformed by loading during fossilisation.

Newswise — "Everyone's unique" is a popular maxim. All people are equal, but there are of course individual differences. This was no different with dinosaurs. A study by researchers at the University of Bonn and the Dinosaur Museum Frick in Switzerland has now revealed that the variability of Plateosaurus trossingensis was much greater than previously assumed. The paleontologists examined a total of 14 complete skulls of this species, eight of which they described for the first time. The results have now been published in the scientific journal "Acta Palaeontologica Polonica".

Plateosaurus lived during the Late Triassic, about 217 to 201 million years ago. "With well over 100 skeletons, some of them completely preserved, it is one of the best known dinosaurs," says Dr. Jens Lallensack, who researched dinosaur biology at the University of Bonn and has been working at Liverpool John Moores University (UK) for several months. The herbivore had a small skull, a long neck and tail, powerful hind legs and strong grasping hands. The spectrum is considerable: Adult specimens ranged from a few to ten meters in length, weighing between about half a ton and four tons.

The first bones of Plateosaurus were found as early as 1834 near Nuremberg, making it the first dinosaur found in Germany, and one of the first ever. Between 1911 and 1938, excavations unearthed dozens of skeletons from dinosaur "graveyards" in Halberstadt (Saxony-Anhalt) and Trossingen (Baden-Württemberg). A third such cemetery was discovered in the 1960s in Frick, Switzerland. "It's the only one where there are still digs every year," Lallensack says. The material from Frick, which is described in detail for the first time, includes eight complete and seven fragmentary skulls excavated by Swiss paleontologist and dinosaur researcher Dr. Ben Pabst and his team.

Dinosaurs have been preserved for posterity mainly through bones. Paleontologists rely on anatomical details to distinguish different species. "A perpetual difficulty with this is that such anatomical differences can also occur within a species, as natural variation between individuals," Lallensack reports. Researchers at the University of Bonn and the Dinosaur Museum Frick (Switzerland) have now been able to show that Plateosaurus anatomy was significantly more variable than previously thought - and the validity of some species needs to be re-examined. These findings were made possible by analyses of 14 complete and additional incomplete skulls of Plateosaurus. "Such a large number of early dinosaurs is unique," says paleontologist Prof. Dr. Martin Sander of the University of Bonn.

Can all these fossils from Germany and Switzerland really be assigned to a single species? Answering this question has become all the more urgent since Martin Sander and Nicole Klein of the University of Bonn published in "Science" in 2005. According to this, Plateosaurus was probably already warm-blooded like today's birds, but was able to adapt its growth to the environmental conditions - something that today can only be observed in cold-blooded animals. "This hypothesis is of great importance for our understanding of the evolution of warm-bloodedness," reports Lallensack. However, until now the observed individually distinct growth patterns could alternatively be explained by the assumption that there was not only one, but several species present. The current study debunks this.

The researchers have now carefully documented the variations in skulls of different sizes. A significant portion of the differences can be attributed to bone deformation during fossilization deep below the Earth's surface. Individual variations must be distinguished from this: The posterior branch of the zygomatic bone, which is sometimes bifurcated and sometimes not, appeared most striking to the researchers. A strongly sculptured bone bridge over the eye was also present only in some skulls. The relative size of the nasal opening also varies.

"It becomes apparent that each skull has a unique combination of features," Lallensack notes, emphasizing the distinct individuality of these dinosaurs. The uniquely large number of skulls studied made it possible to show that the differences in characteristics were variations within a species and not different species. "Only if as many finds as possible are excavated and secured will we obtain the high quantities needed to prove species affiliation and answer fundamental questions of biology" says Sander.

Caption: on loan from the Frick Dinosaur Museum, on display at the Zoological Research Museum Alexander Koenig (ZFMK) in Bonn.

Caption: of Plateosaurus trossingensis (top) and a reconstruction of the skull with the different bones highlighted in colour (bottom).

Caption: of a Plateosaurus trossingensis skull deformed by loading during fossilisation.