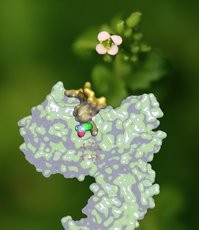 Superimposed on a photo of Arabidopsis, the plant hormone receptor TIR1 and its hormone, auxin. Until recently, how TIR1 and auxin interacted was unknown.

Newswise — For the first time, scientists from the University of Washington School of Medicine, Indiana University Bloomington and the University of Cambridge have determined how a plant hormone -- auxin -- interacts with its hormone receptor, called TIR1. Their report, on the cover of this week's issue of Nature, also may have important implications for the treatment of human disease, because TIR1 is similar to human enzymes that are known to be involved in cancer.

"Learning that auxin regulates TIR1 is a huge advance for plant biology that will probably have important implications for agriculture in the future," said IU Bloomington plant biologist Mark Estelle. "It's a bonus for us that TIR1 is related to proteins in other organisms, including humans. Some of TIR1's human relatives play a role in different human cancers, and it is possible that our work on plants will eventually lead to new cancer drugs."

Until now it was believed enzymes like TIR1, called ubiquitin ligases, could only be controlled through protein-protein interactions. Ubiquitin ligases influence growth and light response in plants, poison mitigation in yeasts and also cancerous cell division in humans.

"Although ubiquitin ligases have long been recognized as potential drug targets for treating cancers and other human diseases, it's been a bumpy road for scientists to come up with a feasible approach," said University of Washington School of Medicine pharmacologist Ning Zheng, who led the research. "The mechanism by which auxin works points out a new direction for us to develop therapeutic compounds targeting ubiquitin ligases."

The scientists extracted and purified TIR1 from the common plant model Arabidopsis. By x-raying crystals of the protein, Zheng, Estelle and colleagues determined the enzyme's three-dimensional structure -- a first for plant hormone receptors. The scientists then soaked the crystal in a solution containing auxin and repeated the x-ray treatment to determine where the auxin had bound. Finally the scientists added a peptide that TIR1 is known to bind and modify.

The scientists learned that auxin is a sort of "molecular glue" that improves the ability of TIR1 to bind its peptide target. In the absence of auxin, TIR1 does not bind its target as tightly.

"A number of human disorders including Parkinson's disease, and colon and breast cancers, are caused by defective interactions between ubiquitin ligases and their substrate polypeptides. What the plant hormone tells us is that it might be possible to rescue these interactions using small molecules," said Zheng.

Two teams of scientists reported in May 2005 (also in Nature) that TIR1 is, in fact, a receptor for auxin. Estelle led one of the two teams; Ottoline Leyser of the University of York led the other. The discovery put to end conjecture about how auxin initiates growth and light response in plants, but it also caught the attention of those studying the molecular biology and biochemistry of human ubiquitin ligases.

Xu Tan and Changxue Zheng (University of Washington School of Medicine), Luz Irina Calderon-Villalobos (Indiana University Bloomington), and Michal Sharon and Carol Robinson (University of Cambridge) also contributed to the report. It was funded with grants from the National Institutes of Health, the Pew Scholar Program, the National Science Foundation and the U.S. Department of Energy.