8-Mar-2012 8:00 AM EST, by Salk Institute for Biological Studies
favorite_border

The left image shows GABA inhibitory neurons (labeled green) in the brain's reward pathway. The right panel shows electrical activity of GABA inhibitory neuron in a Saline-injected or methamphetamine (METH)-injected mouse. Activation of the GABA type B receptor normally silences electrical activity, but has no effect in a mouse 24 hours after a single injection of methamphetamine 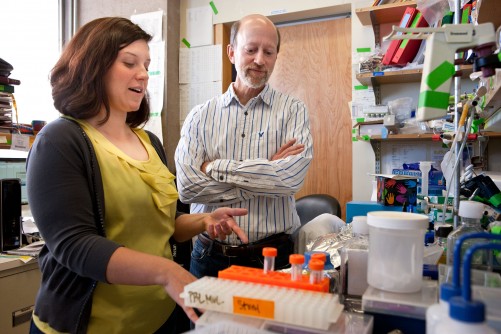 Salk scientists discover a single injection of cocaine or methamphetamine produces a long-lasting cellular memory trace that could be the brain's way of resisting powerful psychostimulants Newswise — LA JOLLA, CA----A single injection of cocaine or methamphetamine in mice caused their brains to put the brakes on neurons that generate sensations of pleasure, and these cellular changes lasted for at least a week, according to research by scientists at the Salk Institute for Biological Studies. Their findings, reported March 7 in Neuron, suggest this powerful reaction to the drug assault may be a protective, anti-addiction response. The scientists theorize that it might be possible to mimic this response to treat addiction to these drugs and perhaps others, although more experiments are required to explore this possibility. "It was stunning to discover that one exposure to these drugs could promote such a strong response that lasts well after the drug has left the body," says Paul Slesinger, an associate professor in the Clayton Foundation Laboratories for Peptide Biology. "We believe this could be the brain's immediate response to counteract the stimulation of these drugs." Scientists are trying to better understand the brain's response to psychoactive drugs in hopes of finding new ways to prevent and treat addiction. This research has become especially important as the number of deaths due to drug abuse now exceeds those due to car accidents, with more than 37,000 people dying from drugs in 2009, according to the Centers for Disease Control and Prevention. Slesinger and Christian Lüscher, a long-time collaborator at the University of Geneva, have been investigating the cellular changes in the brain that occur with drug abuse. Dopamine is a primary neurotransmitter used in the brain's reward pathway ---- generally speaking, the activity of dopamine neurons in the reward pathway increases in response to rewards, such as sex, food and drugs. Psychostimulants, such as methamphetamine and cocaine, co-opt this pathway and alter the brain's response to dopamine. Understanding the neuroadaptations that occur in the reward pathway in response to drugs of abuse may lead to the development of a treatment for drug addiction. Previous research has shown that use of cocaine and methamphetamine in mice enhances excitatory connections to dopamine neurons. While most research has focused on these excitatory neurons, Slesinger and his colleagues looked at neurons that inhibit dopamine transmission, and found that one injection of cocaine or methamphetamine produces a profound change in the function of these inhibitory GABA neurons. These neurons were not able to control how they fired, so they would release more than the usual amount of inhibitory neurotransmitter. "This persistent change in the inhibitory neurons occurs simultaneously with enhancement of excitatory inputs, indicating a possible compensatory mechanism that could be protective during exposure to drugs," Slesinger says. The Salk researchers identified a change in the biochemical pathway in inhibitory GABA neurons that led to this protective effect. It involved a change in the activity of a protein, known as a phosphatase, which controls the levels of a receptor known to be important for controlling the electrical activity of the GABA neuron. "This particular pathway ---- involving a GABA type B receptor and a particular type of potassium channel ---- was affected by psychostimulants in these inhibitory neurons," Slesinger says. "We noticed a dramatic reduction in the strength of this signaling pathway, which we showed was due to a decrease in the activity of the GABAB receptor and the potassium channel on the neuron's membrane surface." "If we could tap into this pathway ---- enhance the ability of inhibitory neurons to control the activity of dopamine neurons ---- we might be able to treat some types of drug addiction," Slesinger says. What is not known is how long the drug response lasts ---- this study only looked at the brains of mice at two time points, 24 hours and seven days, after drug use ---- and why addiction ultimately develops with chronic drug use. These are questions Slesinger and his colleagues are now investigating. The study's two lead authors are Claire Padgett, a former postdoctoral researcher in the Slesinger laboratory, and Arnaud Lalive, a doctoral student at the University of Geneva, who is working in the laboratory of Christian Lüscher, also a co-author. Other participating investigators include: Michaelanne Munoz, of the University of California San Diego; Stephen Moss and colleagues from Tufts University School of Medicine; Rafael Luján, from the Universidad de Castilla-La Mancha in Albacete, Spain; and investigators from Hokkaido University School of Medicine in Sapporo, Japan; University College in London; and AstraZeneca in Cheshire, United Kingdom. The study was funded by the National Institute on Drug Abuse, the National Institute of Neurological Disorders and Stroke, Catharina Foundation and the Spanish Ministry of Education and Science. About the Salk Institute for Biological Studies:The Salk Institute for Biological Studies is one of the world's preeminent basic research institutions, where internationally renowned faculty probe fundamental life science questions in a unique, collaborative, and creative environment. Focused both on discovery and on mentoring future generations of researchers, Salk scientists make groundbreaking contributions to our understanding of cancer, aging, Alzheimer's, diabetes and infectious diseases by studying neuroscience, genetics, cell and plant biology, and related disciplines.