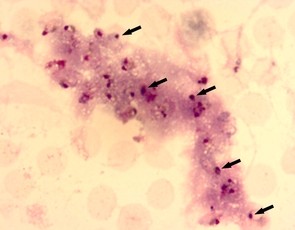 Newswise — April 25 is World Malaria Day 2008 and despite the grim statistics out of Africa there's cause for celebration. Florida State University biologists have discovered an autoimmune-like response in blood drawn from malaria-infected African children that helps to explain why existing DNA-based anti-malaria vaccines have repeatedly failed to protect them.

The groundbreaking study is expected to speed and better inform the development of new treatments and vaccines that effectively target the unique medical needs of malaria's smallest, most vulnerable victims.

FSU's research -- which focused on children in remote Nigerian villages who were younger than 6 and infected with Plasmodium falciparum, the most virulent form of the malarial parasite -- has shed much-needed light on heretofore poorly understood remnants of white blood cells that have long been known to circulate in malaria victims' blood but were thought to be debris.

Researchers from FSU's Department of Biological Science were the first to observe that the white blood cell remnants actually are Neutrophil Extracellular Traps or "NETs" that both capture malaria parasites and engender unique, often deadly responses in the immune systems of very young children. As a result, they are far more likely to develop severe, coma-inducing malaria and die than are adults who may carry higher levels of the parasite but have survived repeated infections.

Those findings are described in the February 2008 edition of the journal Malaria. The paper was co-authored by FSU Associate Professor Tom Keller, Professor Ken Roux and graduate research assistant Pallavi Tawde and led by Keller's then-doctoral student Virginia Baker, now an assistant professor at Chipola College in Marianna, Fla.

The FSU news has emerged amid worsening data on malaria's human and economic costs. Described 4,700 years ago in ancient Chinese medical writings and by the Greek physician Hippocrates in the 4th-century B.C.E., malaria today still sickens and kills more children in Africa -- where more than 90 percent of all cases of malaria occur -- than almost any other cause.

To better understand why children are so sensitive and to look for clues to why adults become resistant to malaria infection, the FSU researchers measured the levels of cytokines -- molecules that are released in response to infection and circulate in the blood stream to function as signals in the immune system -- both before and after the children were treated with an effective anti-malarial drug.

"We also took a fresh look at some unusual white blood cells that appeared to have exploded in the children's blood smears," Keller said. "Although scientists had observed these structures for years in malaria-infected blood samples, they remained very poorly understood.

"From our interpretations of the existing literature, we suspected that an autoimmune-like response may have contributed to the severity of malaria in young children," he said. "Nevertheless, we were completely surprised to find that the strange white blood cell structures characterized by previous researchers as artifacts or an extraordinary response to other types of infections were in fact circulating 'NETs' of DNA, which form as a result of the immune system's response to malaria."

Consequently, said Baker, protocols designed to treat the accompanying autoimmune-like response will be more effective in preventing severe malaria in young children than treatments directed only at clearing the parasites.

In 2004, as a graduate student with extensive field and laboratory experience in the diagnosis and treatment of Asian malaria, Baker organized the FSU study and spent several weeks in Nigeria directing the sample collection by Nigerian medical collaborators. The samples were shipped to the United States and analyzed at FSU between 2005-2007. The 2008 paper, "Cytokine-associated Neutrophil Extracellular traps and antinuclear antibodies in Plasmodium falciparum infected children under six years of age," is accessible online at http://www.malariajournal.com/articles/browse.asp.

A grant from the World Health Mission funded the FSU study, which included the distribution of insecticide-treated mosquito nets and anti-malarial drugs to Nigerian villages.

The Sunshine State could well become an unexpected beneficiary of FSU's research.

"Whenever a vector, such as a mosquito, can carry a life-threatening illness, it becomes of interest closer to home, especially when the disease affects American travelers who may unwittingly carry the disease to U.S. soil," Keller said. "The State of Florida has all the necessary constituents to sustain the malaria life cycle, and the functional immune system found in the typical American is in no way primed to defend itself against the relentless cellular destruction incurred by the falciparum malaria parasite. We'd all have reason to celebrate the advent of better treatments and an effective vaccine."

The FSU team of Baker, Keller, Roux and Tawde collaborated with the Nigerian Institute of Medical Research and medical investigators from Jos University and its affiliated Teaching Hospital and Medical School in Jos, Nigeria. Additional assistance came from U.S. doctors associated with World Health Mission and from Dr. Murray Baker of Jackson Hospital in Marianna, Fla.