Do It Yourself and Save: Making Equipment for the Lab, in the Lab 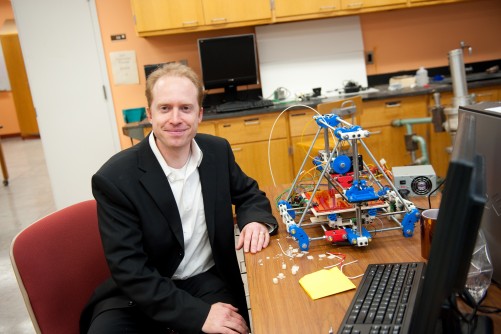 Joshua Pearce with a second-generation, open-source, 3D printer called a Mendel RepRap. The machine is made up of parts from any hardware store, open-source electronics available online, and parts that it can make for itself--all the red, white and blue components.

Newswise — The DIY movement has vaulted from the home to the research lab, and it’s driven by the same motives: saving tons of money and getting precisely what you want. It’s spawning a revolution, says Joshua Pearce of Michigan Technological University.

Three converging forces, all open source, are behind this sea change, he explains in an article in the Sept. 13 issue of Science: software, 3D printers and microcontrollers. With these tools, researchers from all over the world are driving down the cost of doing science by making their own lab equipment.

The open-source Arduino microcontroller is key. “The beauty of this tool is that it’s very easy to learn,” said Pearce, an associate professor. “It makes it so simple to automate processes.”

Here’s how it works. The Arduino—which retails for about $35 at RadioShack—can run any number of scientific instruments, among them a Geiger counter, an oscilloscope and a DNA sequencer. But it really shines when it operates 3D printers like the open-source RepRap. This microwave-sized contraption starts at about $500 and can actually make parts for itself. Once you have one RepRap, you can make an entire flock. Pearce’s lab has five.

3D printers make stuff by laying down sub-millimeter-thick layers of plastic one after another in a specific pattern. This allows users to make devices to their own specifications, so they don’t have to make due with what’s available off the shelf.

The Arduino controls the process, telling the printer to make anything from toy trains to a lab jack.

Lab jacks raise and lower optical equipment and aren’t radically different from the jacks that raise and lower your car, except that they are more precise. Pearce received a quote for a thousand dollar version, which inspired him to design his own. Using a RepRap, inexpensive plastic filament and a few nuts and bolts, Pearce and his students made one for under a buck.

Then they posted the OpenSCAD code they used to make the lab jack on Thingiverse, a web repository of designs where members of the “maker community” can submit their designs for all kinds of objects and receive feedback.

“Immediately someone I’d never met said, ‘This isn’t going to work quite right, you need to do this,’” Pearce said. “We made a simple change, and now I have a lab jack that’s superior to our original design.”

Thingiverse is a child of the free and open-source software movement, or FOSS. Not only does it provide top-notch designs for all manner of objects, it can bring thousands of expert minds to bear on a problem, Pearce said. It’s the ultimate in teamwork.

“It is creating a gift economy. We’ve paid into the community by submitting our designs, and we get payment back in the form of excellent feedback and free access to other peoples work. The more you give, the more you get, and in the process everyone wins,” he said.

“The Thingiverse community already has a whole line of open-source designs for over 30,000 things, and everyday it’s only getting better.”

And it’s cheap, which is where the revolution comes in.

At Michigan Tech, Pearce is organizing a student-based Enterprise to do open-source projects for industry and to build custom-made instrumentation for university faculty at a fraction of the cost. “This gives students the skills they need and lets them benefit the entire field,” he said.

In university research labs everywhere, thousands of dollars that once paid for equipment can now support graduate students. High schools will be able to afford good science labs. More research can be funded with fewer dollars, driving more discoveries.

“Using open-source hardware has easily saved our research group thousands of dollars, and we are only getting warmed up. This will change the way things are done,” Pearce said. “There’s no stopping it.”

To see and use the designs Pearce’s research group has submitted to Thingiverse, including a replacement for a $2,500 automated filter wheel changer, a laser welding system, and the open-source RecycleBot that turns waste plastic like milk jugs into 3D printer filament, go to http://www.thingiverse.com/jpearce/things .