Does Your Financial Adviser Specialize in Misconduct?

First large-scale study documents extent of misconduct, find most advisers keep their jobs or are rehired 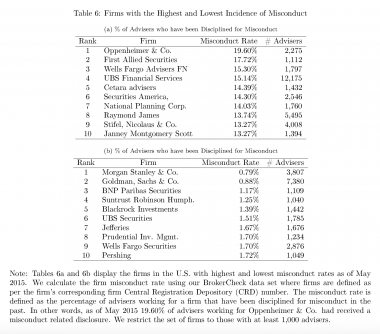 Newswise — Financial advisers are often perceived as dishonest, and consistently rank among the least trustworthy professionals. New research from the University of Chicago Booth School of Business suggests this public perception may be deserved.

The working paper, "The Market for Financial Adviser Misconduct," by Professor of Finance Amit Seru and Associate Professor of Finance Gregor Matvos, both of Chicago Booth, along with the University of Minnesota’s Mark Egan, finds that some of the largest financial advisory firms in the U.S. have the highest rates of misconduct.

At Oppenheimer, 20 percent of advisers have been disciplined for misconduct, the researchers find. At First Allied Securities, 18 percent; at Wells Fargo Advisors FN, 15 percent; and at UBS Financial Services, 15 percent. Morgan Stanley and Goldman Sachs are among the firms with the lowest rates of misconduct, with rates at both closer to 1 percent.

The researchers constructed a novel database containing financial advisers in the U.S. from 2005 to 2015, representing approximately 10 percent of the employment of the finance and insurance sector. The data reveal that more than 12 percent of active financial advisers’ records have a disclosure, which can indicate any sort of dispute or disciplinary action, alleged or established.

Approximately 7 percent of advisers have misconduct records. Prior offenders are five times as likely to engage in new misconduct as the average financial advisor. More than half of misbehaving advisers stay with the same firm after a year, according to the data. Of those who leave, 44 percent quickly (within a year) find new jobs in the industry.

The research indicates that misconduct is widespread in regions with relatively high incomes, low education levels, and elderly populations. Some firms rife with misconduct are likely targeting vulnerable consumers, say the researchers, while other firms use their reputation to attract sophisticated consumers.

Financial advisers’ misconduct records are public information, which should help to prevent and punish misconduct. But according to the research, neither market forces nor regulators are successfully preventing such advisers from continuing to provide their services. The research has implications for regulators, policy makers and the financial industry. Financial advice is big business in the US: 56 percent of all American households seek advice from a financial professional, according to the Survey of Consumer Finances, issued by the US Federal Reserve in cooperation with the Treasury Department.