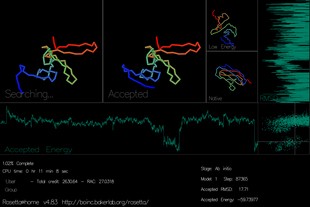 Image courtesy of the University of Washington

[email protected] users can use the program's screen saver, which shows the program testing the energy levels of various protein structures.

Newswise — Just because you don't know much about biology or medicine won't stop you from helping to someday cure diseases like malaria, HIV, or cancer. In fact, all you need is a computer and an Internet connection and you can play a pivotal role in the search for treatments and cures for some of the world's biggest killers.

For many people, their computers can sit idle for hours every day. Through a project called [email protected], people can donate that idle time to biomedical research.

"This is a way that people from all backgrounds can now make important contributions to progress in science and medicine," said Dr. David Baker, a University of Washington and Howard Hughes Medical Institute biochemist, and the head of the [email protected] project.

The project relies on a concept called distributed computing, which uses hundreds or thousands of separate computers to take on difficult projects. Some scientific problems require very complex, massive calculations, that might be possible to run on one of the world's most powerful super computers. But in distributed computing, a scientist can take that massive calculation and break it into lots of much smaller chunks that can be run on a home computer. Put together hundreds, thousands, even tens or hundreds of thousands of those home computers, and all of a sudden the scientist has what amounts to a super computer tackling that complex problem.

Distributed computing has been used in projects as far-reaching as the search for alien life in the universe, or as close to home as the prediction of global climate change. In the case of [email protected], people can put their computers to work on the science of proteins, which are the building blocks of all life. Understanding how proteins form their complex, three-dimensional structures can help us learn how life begins, and it can also have huge implications for disease research.

"[email protected] seeks to solve one of the longest standing problems in molecular biology, with important implications for human health and the treatment of disease," said Baker. "I think it is wonderful that through the contributions of volunteers around the world, we can make real progress on this extremely challenging problem."

Being able to predict the complex structure of a protein in the malaria parasite, for instance, could give scientists a cellular roadmap for attacking and eliminating that parasite, preventing the spread of the disease. Or being able to design new proteins could help researchers design a vaccine for HIV, a major current effort in Baker's group.

These are the kinds of advances that may be possible in the future as scientists like Baker perfect their computer models of protein structure. But those advances will be difficult without thousands and thousands of people donating something that doesn't cost them a thing: their computer's leftover power.

Getting in on the project is easy enough: users only have to visit the [email protected] Web site (http://boinc.bakerlab.org/rosetta/) and download and install the Rosetta software. That program sits idly until the computer is not in use, and then connects to the [email protected] server for a chunk of data. It works steadily on that data until the user comes back, when it pauses until the next period of downtime.

[email protected] users can also learn more about the scientific problems they're helping to tackle by visiting the project's information Web pages and online forums, which allow users to pose questions to Baker and other users. [email protected] doesn't just help people learn about science " it allows them to help with important scientific research while they learn about it.