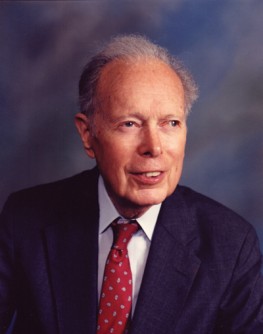 Newswise — Denham Harman, M.D., Ph.D., 98, a legendary figure in science for his 1954 proposal of the Free Radical Theory of Aging, died Tuesday at Lakeside Hospital in Omaha after a brief illness. He served on the faculty of the University of Nebraska Medical Center in Omaha for 52 years (1958 to 2010).

Dr. Harman, who was nominated six times for the Nobel Prize, theorized that free radicals – highly reactive molecules freed in the normal chemical processes – cause aging and disease through their destructive actions in cells and tissues. The theory was first ridiculed and dismissed by many in the scientific community, but gained support in the 1960s with other scientists.

He added further support to the theory by conducting pioneering research on the role of antioxidants – vitamins C, E and beta-carotene – and how they can reduce the cancer-causing and atherosclerosis-causing effects of free radicals.

“If we are able to extend human lifespan it is only by standing on the shoulders of giants like Dr. Harman,” said David Sinclair, Ph.D., professor at Harvard Medical School and a leading expert in aging who gained notoriety for his discovery that resveratrol, a compound in red wine, activates a protein that promotes health and longevity in animal models. “Dr. Harman embodies the best of American scientific pursuit, having made seminal contributions to knowledge and giving generously to students and to the wider community.

"Dr. Harman is one of the most influential scientists of the past 50 years, bringing world-class science to what was once a backwater of biology. His Free Radical Theory of Aging is a cornerstone of the aging field. He has inspired thousands of young scientists to work on aging, including myself.”

Last April, Dr. Sinclair came to UNMC to deliver the Denham Harman, M.D., Ph.D., Lectureship in Biomedical Gerontology, which was established in 2002 by the University of Nebraska Foundation to honor Dr. Harman.

A San Francisco native, Dr. Harman earned his undergraduate (1940) and doctorate (1943) degrees in chemistry from the University of California at Berkeley and his medical degree (1954) from Stanford University. At the time he developed his aging theory, Dr. Harman was serving as a research fellow in the Donner Laboratory of Medical Physics at UC-Berkeley.

His interest in aging was sparked by an article titled “Tomorrow You May Be Younger.” It appeared in The Ladies Home Journal and was written by William Laurence, science editor of the New York Times.

From 1943 to 1949, Dr. Harman worked as a research chemist for Shell Development Company in Emeryville, Calif. While working at Shell, his research produced 35 basic patents, including the compound for the Shell No Pest Strip.

Dr. Harman joined the UNMC faculty in 1958 when he was named the Nebraska Heart Association Chair of Cardiovascular Research with appointments in biochemistry and internal medicine. He was promoted to professor of medicine and biochemistry in 1968 and was honored in 1973 by being designated the Millard Professor of Medicine.

Because elderly patients had special needs, Dr. Harman believed geriatrics, or care of the elderly, should be a separate subsection of internal medicine. In 1973, UNMC established the first section of biomedical gerontology with Dr. Harman serving as section head. It was the first such program in the country. Today, it is commonplace for academic health science centers to have gerontology sections.

Dr. Harman retired in 1986 and was named an emeritus professor, but he never relented in his quest to better understand aging. “His work became his hobby,” said Helen Harman, his wife of 71 years.

Dr. Harman continued to work at his office from 9 a.m. to 4 p.m., four days per week until 2010 – at the age of 94 – when his health deteriorated following surgeries and he moved to an assisted living facility.

In 1970, Dr. Harman helped establish the American Aging Association (AGE), a national lay-scientific health organization patterned after the American Heart Association. Its main purpose is to promote biomedical aging research directed towards slowing the aging process. He served as AGE’s first president and as executive director of the organization from 1972 to 1992. In 1985, he founded the International Association of Biomedical Gerontology.

In addition to serving on the UNMC faculty, Dr. Harman served as chief of the Nebraska Geriatric Service for Douglas County Hospital from 1971 to 1986.

His numerous awards include: the 1999 Distinguished Alumni Award from the Stanford Medical Alumni Association; being recognized in 2000 as one of the 40 outstanding Stanford medical graduates during the past century; the Distinguished Achievement Award from AGE in 2002; and the 2003 Dean’s Award for Outstanding Contributions to the UNMC College of Medicine. In 1981, he was appointed chairman of one of the committees of the White House Conference on Aging.

Earlier this year, Dr. Harman was nominated by UNMC for the prestigious National Medal of Science Award. Winners from this year’s nominees have yet to be announced.

Dr. Harman traveled extensively around the world speaking on aging. He spent a month in Japan lecturing to students and professionals around the country. He was named an honorary member of the Japan Society for Biomedical Gerontology and the South Korean National Aging Institute.

Through world-class research and patient care, UNMC generates breakthroughs that make life better for people throughout Nebraska and beyond. Its education programs train more health professionals than any other institution in the state. Learn more at unmc.edu and follow us on social media.