28-Feb-2017 11:05 AM EST, by Uniformed Services University of the Health Sciences (USU)
favorite_border 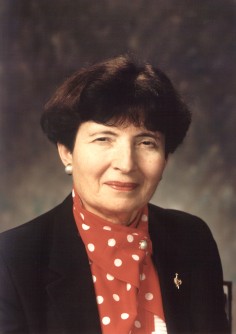 Newswise — Bethesda, Md. - Dr. Faye Glenn Abdellah, founding Dean of the Uniformed Services University of the Health Sciences (USU) Daniel K. Inouye Graduate School of Nursing (GSN), and retired Rear Admiral of the U.S. Public Health Service (USPHS) passed away Friday, Feb. 24, at the age of 97. Abdellah was a pioneer and internationally recognized leader in nursing whose contributions substantially improved the nation’s health. A true visionary, Abdellah was dedicated to advancing the nursing profession and is considered to be among the world’s most influential nursing theorists and public health scientists.

In 1937, 18-year-old Faye Abdellah witnessed the explosion of the German passenger airship, Hindenburg, in Lakehurst, New Jersey, which became a crucial turning point in her life. In an interview years later for Advance for Nurses, she said, "I could see people jumping from the zeppelin and didn't know how I would take care of them, so I vowed that I would learn nursing."

Abdellah earned a nursing diploma from the Ann May School of Nursing in Neptune, New Jersey, undergraduate, masters and doctoral degrees from Columbia University, NY and graduate work in the sciences from Rutgers University. She authored more than 153 publications, some translated into six languages, including her seminal works, “Better Nursing Care Through Nursing Research” and “Patient Centered Approached to Nursing,” which forever changed the focus of nursing theory from disease-centered to patient-centered. She was the recipient of twelve honorary university degrees, and numerous awards, including the prestigious Allied Signal Award in 1989 and the Institute of Medicine's Gustav O. Lienhard Award in 1992, all recognizing her innovative work in nursing research and health care.

Abdellah was the first nurse and the first woman to serve as Deputy Surgeon General (with Dr. C. Everett Koop) and was first nurse to hold the rank of Rear Admiral (upper half). Her incredible leadership abilities resulted in many truly remarkable accomplishments, including the development of the first tested coronary care unit, saving thousands of lives. Dr. Abdellah was renowned as an expert in health policies related to long-term care, mental retardation, the developmentally disabled, aging, hospice, and AIDS.

In 1989, she retired from the Public Health Service, and shortly thereafter, Congress directed the initiation of a demonstration program at USU for the preparation of family nurse practitioners to meet the needs of the uniformed services. Abdellah stepped forward to assist then-USU President Dr. James A. Zimble establish the GSN in 1993, and under her leadership the GSN grew from a single master’s degree program with two students, to a premier, fully accredited graduate school. Today, the GSN offers advanced practice and research doctoral degrees, and more than 700 nurse scientists, nurse anesthetists, clinical specialists, and family, women’s health and psychiatric mental health nurse practitioner alumni are advancing military, veteran and federal health.

Abdellah was a charter Fellow in the American Academy of Nursing, later serving as the Academy's President and in 1994 she was one of the first Fellows to receive the Academy’s highest honor, the “Living Legend'' Award. In 1999, she was elected to the Hall of Fame for Distinguished Graduates and Scholars at Columbia University, and the following year, was inducted into the National Women’s Hall of Fame for a lifetime spent establishing and leading essential health care programs for the nation. In acknowledging the recognition, Abdellah said, "We cannot wait for the world to change... Those of us with intelligence, purpose, and vision must take the lead and change the world. Let us move forward together! ... I promise never to rest until my work has been completed."

In 2001 she received the "Breaking Ground in Women's Health Award”, and in 2012, she was inducted into the American Nurses Association Hall of Fame. Abdellah retired from USU in 2002 after 49 years of service to the Federal government and the nation. “This is an incredible loss to the nation and nursing. Her intellect, compassion, and passion for excellence will be deeply missed. As a former student at USU’s GSN, I feel personally blessed to have learned from her leadership,” said Rear Adm. Susan Orsega, USPHS Chief Nurse Officer.

“Dr. Abdellah is a nursing icon for leadership in education, research, practice and health policy. She has influenced almost every aspect of nursing and public health. Like Florence Nightingale, she has been a beacon of light for future generations and has provided vision for the science and the practice of nursing. I was privileged to meet her when I was a new graduate and have viewed her as a mentor throughout my career. Her influence will live on as an inspiration to uniformed officers and health professionals,” said Dr. Carol Romano, dean of the Daniel K. Inouye Graduate School of Nursing.

The Graduate School of Nursing, in collaboration with the USPHS, is planning a memorial tribute to honor Dr. Abdellah and the nearly half-century of her extraordinary contributions to the nation.

About the Uniformed Services University of the Health SciencesThe Uniformed Services University of the Health Sciences, founded by an act of Congress in 1972, is the nation’s federal health sciences university and the academic heart of the Military Health System. USU students are primarily active duty uniformed officers in the Army, Navy, Air Force and Public Health Service who receive specialized education in tropical and infectious diseases, TBI and PTSD, disaster response and humanitarian assistance, global health, and acute trauma care. A large percentage of the university’s more than 5,500 physician and 1,000 advanced practice nursing alumni are supporting operations around the world, offering their leadership and expertise. USU also has graduate programs in biomedical sciences and public health committed to excellence in research, and in oral biology. The University’s research program covers a wide range of clinical and other topics important to both the military and public health. For more information about USU and its programs, visit www.usuhs.edu.