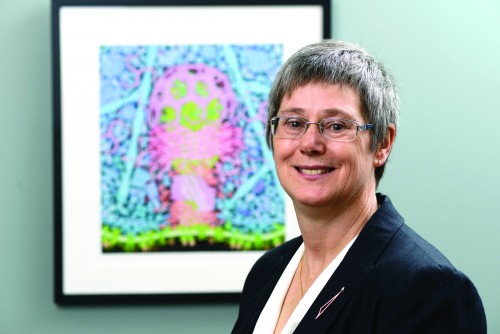 Dr. Sandra L. Schmid, chair of the Department of Cell Biology at UT Southwestern Medical Center, has been elected to membership in the American Academy of Arts and Sciences (AAAS).

Newswise — DALLAS – April 22, 2015 – Dr. Sandra L. Schmid, chair of the Department of Cell Biology at UT Southwestern Medical Center, has been elected to membership in the American Academy of Arts and Sciences (AAAS). Dr. Schmid is internationally recognized for her research on endocytosis – the fundamental process by which cells internalize nutrients. She also holds the Cecil H. Green Distinguished Chair of Molecular and Cellular Biology at UT Southwestern and is a member of the Harold C. Simmons Comprehensive Cancer Center.

“I’m honored. The AAAS lists as its mission to ‘champion scholarship, civil dialogue, and useful knowledge,’ values to which I try to adhere. This recognition, of course, reflects the extensive amount of useful knowledge contributed to my work over the years by my many talented students and postdoctoral fellows, so I’m very grateful to them, as well as to the AAAS, for this honor,” Dr. Schmid said.

“Dr. Schmid has made discoveries that have advanced our knowledge of endocytosis, a fundamental cellular process that plays an essential role in nutrient and antigen processing. Her findings have helped delineate the mechanisms through which endosomes move throughout the cell to fulfill their functions. We at UT Southwestern are both delighted and proud to see her outstanding contributions recognized by her election to AAAS,” said Dr. Daniel K. Podolsky, president of UT Southwestern and holder of the Philip O'Bryan Montgomery, Jr., M.D. Distinguished Presidential Chair in Academic Administration and the Doris and Bryan Wildenthal Distinguished Chair in Medical Science.

Dr. Schmid is a past president of the American Society for Cell Biology and in 2014 was one of only six new foreign associate members elected to the European Molecular Biology Organization. In addition, she has served on several scientific advisory boards, including one at the Howard Hughes Medical Institute.

Dr. Schmid was recruited to UT Southwestern in 2012, after 23 years at Scripps Research Institute in California, including 12 years as chair of cell biology. While in California, Dr. Schmid earned a master’s degree in executive leadership from the University of San Diego School of Business Administration.

A native of Canada who now holds dual citizenship, she earned her undergraduate degree (cell biology, high honours) from the University of British Columbia, and a doctorate in biochemistry from Stanford University. Dr. Schmid then completed a fellowship in cell biology at Yale University.

Since its founding in 1780, the Academy has elected leading “thinkers and doers” from each generation, including George Washington, Benjamin Franklin, Daniel Webster, Ralph Waldo Emerson, Margaret Mead, and Martin Luther King, Jr. The current membership includes more than 250 Nobel Laureates and more than 60 Pulitzer Prize winners.

Other UT Southwestern faculty who are members of the Academy and the years they were elected are:

The new class will be inducted at a ceremony on Oct.10 in Cambridge, Massachusetts.

###This news release is available on our World Wide Web home page athttp://www.utsouthwestern.edu/home/news/index.html