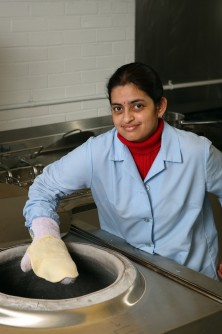 Sowmya Arra, a food science graduate student at South Dakota State University, gets ready to put flat bread dough in a tandoor oven at the SDSU food lab. While tandoor ovens are noted for generating high temperatures, according Arra the items made with the dried distillers grain flour she has researched can easily be made in conventional ovens as well. 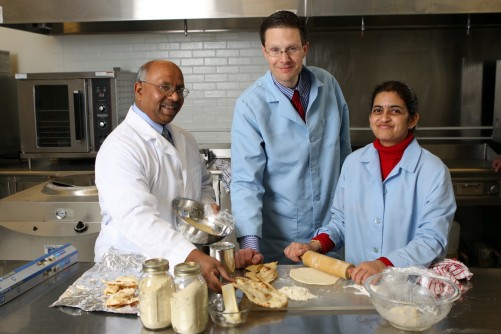 A flour made from dried distillers grain is one of the ingredients used in the flat bread that’s fresh from the oven at the food science lab at South Dakota State University. Looking over the naan, a flat bread popular in Afghanistan, India and Pakistan are, from the left, South Dakota State University Professor Padmanaban (Padu) Krishnan, Agriculture Research Service Biomass Engineer Kurt Rosentrater and SDSU Food Science Graduate Student Sowmya Arra.

Newswise — Don’t be fooled by Sowmya Arra’s soft-spoken nature. The South Dakota State University Food Science graduate student has big dreams. She wants to feed the world and she wants to use dried distillers grain to do it.

While that may seem like a tall order, Arra is well on the way to reaching her goal after winning the graduate research poster competition at the Institute for Food Technologists Conference in Anaheim, California. Competing against 50 other graduate students, Arra won a $1,000 cash award and certificate for her project, “Fortifying Chapathies an Asian Whole Wheat Unleavened Flat Bread Using Corn Distillers Dried Grains.”

When choosing her thesis project, Arra, who is from India, said she wanted “to make a product that has all the nutrient values.” She found that in food-grade, corn distillers dried grain, which contains 40 percent dietary fiber and 36 percent protein.

“Due to economics and their culture, many people make their own bread,” Arra explains. “Since they make flat bread, it only makes sense to provide a better flour ingredient, which has higher nutritional qualities.”

A long questDeveloping food products from dried distillers grain has been a challenge faced by Arra’s adviser, Professor Padmanaban (Padu) Krishnan since he came to SDSU in 1989.

“The food grade DDG is a product I have been working on at SDSU for the past 20 years,” said Krishnan, who envisions limitless possibilities for the flour made from dried distillers grain.

According to Krishnan, the protein and fiber in the flour could find a market in the United States, Asia or India. “We need dietary fiber in this society,” Krishnan said. “Others need dietary protein in developing countries. One ingredient, food grade DDG, meets both criteria along with some health-promoting corn phytonutrients.”

One case where bland is bestFood scientists like Arra and Krishnan are usually charged with developing food products that are both nutritious and delicious. A change of paradigm was called for in the case of food grade DDG. In order to blend with another flour, the DDG flour has to be made aroma neutral, taste neutral and texture neutral.

“We need, in essence, a stealth ingredient that blends with the background and allows other ingredients to pick up the slack,” Krishnan said. “We have to make sure it works in harmony with the food system.”

So far, that food system can handle about 7 percent to 20 percent of the DDG flour in the traditional flour used in bread products. Adding any more of the DDG flour, particularly in yeast-leavened products, undermines the dough system. Krishnan said that by replacing more then 20 percent of wheat flour with the DDG flour, one risks baking “hockey pucks” or “bricks,” but flat breads are a different story.

Mixed in at the right levels however, the DDG flour will add significantly to the fiber and protein of tortillas, cookies, noodles and breads.

Preparing the food grade dried distillers grain for human consumption involves a process of heating, vacuum chamber treatment, grinding and sterilization. This process isn’t like making any other kind of flour from grain. Dried distillers grain posts some challenges, particularly in processing out the aroma of silage. Done right, the process results in a product that’s bland, color neutral, nutrient-enriched and ripe for investment.

Next step belongs to industryA variety of entities have invested in the research so far. At one time or another in the process, that funding has come from the U.S. Agricultural Research Service, the SDSU Agricultural Experiment Station, the South Dakota Wheat Commission and the South Dakota Corn Utilization Council.

At this point, Krishnan’s team has taken the DDG flour about as far as it can. “The entrepreneur is the one who’s going to run with it,” Krishnan said.

Finding those entrepreneurs in a down economy may prove to be difficult. One person who’s on the lookout is Kurt Rosentrater, a biomass engineer with the Agricultural Research Service whose mandate from USDA is to add value to dried distillers grain. Rosentrater has worked collaboratively with SDSU for the past five years.

Closely associated with the research that resulted in Arra’s master’s thesis, Rosentrater said he has fielded calls from “dozens” of companies that are toying with the idea of pursuing the project.

“It’s got to be industry’s investment,” Rosentrater said. “So far, nobody’s been willing to pull the trigger and take that leap.”

Capturing what could be an international market will start first with the Food and Drug Administration. Rosentrater explains that the FDA will need to ensure that the corn is food-grade from the kernel to the finished product. For some ethanol plants, that may mean the installation of new equipment.

While the bad national economy may be keeping investors on the sidelines for now, the economics of ethanol might prove to be ripe for an investment in DDG flour.

“We have not hit a point where we’ve saturated that market,” Rosentrater said, though he does note some interesting factors that may influence the market.

He notes that about 20 percent of DDG was exported internationally last year. “That’s up considerably,” Rosentrater said.

Far from just a byproduct of the ethanol-making process, according to Rosentrater, DDG can account for 20 percent to 40 percent of an ethanol plant’s income. Adding value to the dried distillers grain makes business sense while at the same time helping to alleviate world hunger.

“There are plenty of opportunities if the ethanol plants are interested,” Rosentrater said.

Krishnan believes that the work has accomplished much to add value to an underutilized co-product. “Our research was intended to get everything out of the corn, including the squeal,” Krishnan said.

At present, dried distillers grain is sold at 8 to 10 cents per pound, $165 per ton, as livestock feed. Food ingredients are sold at about $2 to $3 per pound. According to Krishnan, adding utility in the food industry will enhance DDG’s economic return to the producer.

“We have demonstrated scientific, nutritional and technical merit, but we realize that it is the economic drivers that will permit food grade DDG to take wing,” Krishnan said. “The world is hungry for novel protein, fiber and functional ingredients if the $21.8 billion nutraceutical ingredients market is any indication.”