Earth Day 2014: Add Some Green to Your Routine 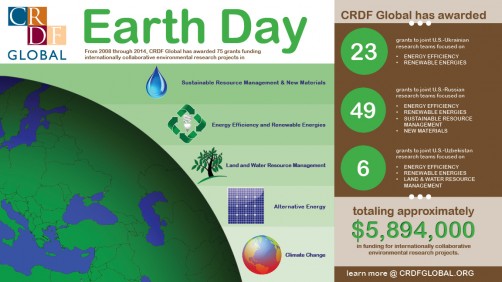 Newswise — It may take a village to raise a child as the saying goes, but the theme of Earth Day 2014, Green Cities, highlights that it takes a global community to keep Earth healthy. Currently more than half of the world’s population lives in urban areas. According to the Intergovernmental Panel on Climate Change (IPCC) by the year 2050 nearly 75% of the Earth’s population will live in cities – making our “villages” a whole lot bigger. Indeed, our cities play a critical role in our societies. They are our political and economic centers. They are hubs of innovation and advanced scientific and technological research. However, they have also played an equally critical role in exacerbating climate change.

Climate change has been a natural process on earth for millions of years caused by biological and solar variations and other processes that emit greenhouse gasses (GHGs). While GHGs occur naturally, we humans emit significant amounts of carbon dioxide into the atmosphere through processes to produce power and products that help sustain life. It makes sense then that large and dense cities can exponentially exacerbate these negative effects.

As the world continues become more urban, we must become more aware of the impacts that urban development is having on not only local and regional environments, but also on human well-being. According to the IPCC, even with the maintenance of current GHG emissions, areas of high urban density populations could see a temperature rise of up to 2.5 degrees by 2025, resulting in the creation of urban “Heat Islands”. Coastal cities would be impacted the most directly, as the predicted 6-8 degree temperature rise in the Artic and Antarctica would raise sea-levels to dangerous levels.

Dr. Hassan Virji, a CRDF Global board member and the executive director of the International START Secretariat, recently gave us a few moments of his time to explain how climate change will impact cities in the future and how cities can help mitigate and adapt to climate change. You can listen to the full conversation, here.

“Climate change will significantly affect all cities of the world whether they are inland or on the coastal margin. So it’s really, really important for cities around the world to focus on climate change and its impacts,” he said. “The impacts being on human health and well-being, not only in terms of flooding and such issues, but also in terms of issues of disaster and disaster risk management, and transport of goods and materials to enable such cities to function as large conglomerates of human enterprise and perhaps where hubs of innovation can be.”

Certainly, the potential impacts of climate change are disheartening, but as concentrated areas of technological and scientific development, cities are most well suited to address these issues. As a global community, we need to commit to building the scientific capacity of the next generation of scientists, technologists, and innovators and empowering scientists to more effectively and efficiently collaborate across borders. We must also realize that climate change mitigation will also require cooperation across disciplines and professions.

In recent years, CRDF Global programs have created opportunities for researchers around the globe to collaborate across borders and develop innovative strategies and tools for climate change mitigation. For instance, through a CRDF Global grant, scientists from the National University of Shipbuilding in Nikolayev, Ukraine worked with scientists at Applied Plasma Technologies in McLean, Virginia to develop a new plasma fuel nozzle that minimizes toxic emissions during fuel usage in power systems. The process that the two teams developed decreased carbon dioxide emission by 30%.

Similarly, with the assistance of grants provided by CRDF Global, Dr. GeorgiyGeletukha and his company, Biomass, have pioneered new ways to generate heat for industrial and commercial use using organic waste combustion. As a result, they are spearheading the development of effective alternative fuels Eastern Europe and are poised to accelerate the pace of biologic-combustibles, as they are now the fourth largest producer of thermal energy after coal, oil, and natural gas, and the European Commission has estimated that by 2020, 18% of the total heat output will come from renewable sources, with 75% coming from biologic-combustibles like biomass.

As quickly as a rapidly growing population can degrade the environment, so can we pool together to sustain and perhaps heal our planet. While green cities may only be one of many solutions needed to conquer our effect on climate change, they help us unconsciously add some green to daily routine and neutralize one of the planet’s biggest contributors of greenhouse gasses.

So as we put forth extra effort to reduce our carbon footprint during the 24 hours of Earth Day, let’s also use it as a benchmark to measure how we incorporate environmentally responsible practices into our daily lives 365 days a year to make living consciously an unconscious practice.