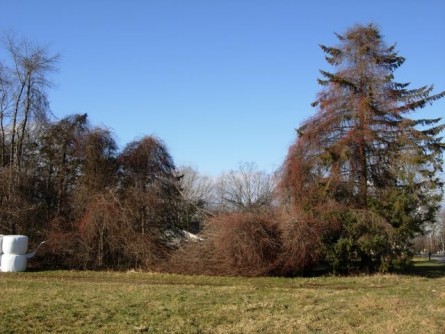 Proactive screening of invasion risk before new plants are introduced could prevent problems like Oriental bittersweet, pictured here dominating a hedgerow. Bittersweet vines were introduced as an ornamental for their attractive berries, but have expanded throughout New England, choking and shading native forest plants. 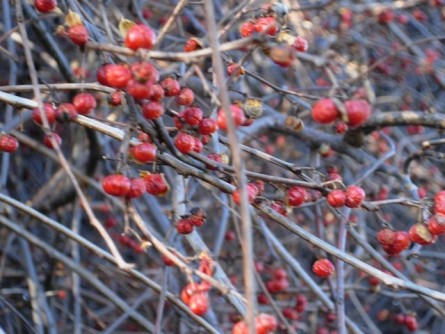 Newswise — AMHERST, Mass. – A recent analysis led by ecologist Bethany Bradley at the University of Massachusetts Amherst suggests that climate change predicted for the United States will boost demand for imported drought- and heat-tolerant landscaping plants from Africa and the Middle East. This greatly increases the risk that a new wave of invasives will overrun native ecosystems in the way kudzu, Oriental bittersweet and purple loosestrife have in the past, members of the international team say.

The kudzu invasion of the past few decades saw whole forests overgrown in the Southeast, along with hedgerows, power lines and even houses. In wetlands across the nation, purple loosestrife is crowding out native marsh plants, and Oriental bittersweet, if left unchecked, shades and chokes out native trees, bushes and shrubs along streams, forest and field edges.

Bradley and colleagues recommend that U.S. authorities adopt proactive management practices, in particular pre-emptive screening of nursery stock before new plants are imported, to prevent such an explosion of new invasives. Their conclusions appear in an early online edition of the Feb. 1 issue of Frontiers in Ecology and the Environment.

As the UMass Amherst environmental conservationist and lead author explains, the U.S. Department of Agriculture (USDA) has proposed the Not Authorized Pending Pest Risk Analysis (NAPPRA) rule to regulate the industry. The rule would require importers to notify the USDA of proposed imports. USDA scientists would then conduct a timely risk assessment and issue a recommendation to allow or curtail the import.

“Our study identifies climate change as a risk, which combined with other factors is likely to increase demand for imported heat- and drought-tolerant plants, but this emerging threat is one that policy can effectively address,” Bradley says. “The USDA has tools to reduce import risk and we advocate that now is the time put them in place. Pre-import screening has been tested in Australia for about 10 years now and it’s not foolproof, but it seems to have done a good job of separating the really bad import ideas from more benign introductions.”

Not all imported plants become invasive, but those that do can become a significant threat to native plants and we should not be complacent about the current situation, she says. About 60 percent of plants now considered invasive were introduced deliberately through the plant trade. The other 40 percent are human-related accidental introductions such as seeds stuck in cargo or shipping containers. Only a tiny fraction of non-native introductions are from natural causes such as blowing in with a hurricane, Bradley says.

She and colleagues point out that rising average temperatures in certain regions of the U.S. are already shifting plant hardiness zones northward and the trend is expected to continue globally. Their study suggests that with the earlier onset of spring, warmer winters, economic globalization and increased trade with emerging economies in Asia and Africa, we may face a significant new wave of invasive plant introductions.

For this analysis of the intersection of global trade and climate change, the ecologists used import values from 1989 to 2010 to identify emerging trade partners, because earlier studies had established a clear link between increased trade and the number of invasive species. They found 42 emerging trade partners poised to supply new nursery plant varieties including Thailand, Egypt, Saudi Arabia, Ecuador, Argentina and several in equatorial Africa.

The rate of introduction is steepest in the early stages of new trade relationships, the authors say. “Unfortunately, increasing the variety and availability of non-native, drought-tolerant species could also increase the probability of introducing species capable of invading dryland regions.” Bradley adds, “In the desert Southwest this has already been happening with xeriscaping, which is becoming more and more popular.” Xeriscaping refers to gardening with low or no need for watering.

Bradley and colleagues’ work focuses on introduction, the first of three stages of invasion, because “stopping invasions before they start is the most effective way of preventing widespread ecological and economic impacts,” she says. “Globalization has accelerated the rate of introduction from a few species at the first colonization of North America to now, when we probably see thousands of new species each year. All we need is another kudzu to have a big impact.”

This work was supported by the National Science Foundation's National Center for Ecological Analysis and Synthesis. 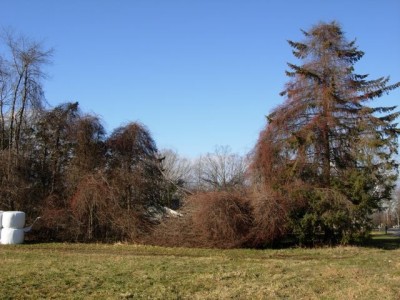 Caption: Proactive screening of invasion risk before new plants are introduced could prevent problems like Oriental bittersweet, pictured here dominating a hedgerow. Bittersweet vines were introduced as an ornamental for their attractive berries, but have expanded throughout New England, choking and shading native forest plants. 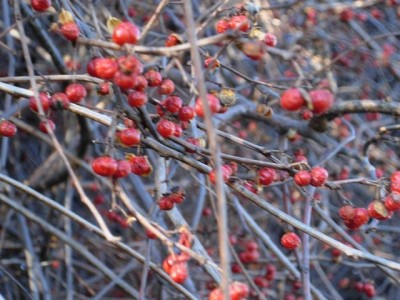 Frontiers in Ecology and the Environment (2/1/12)