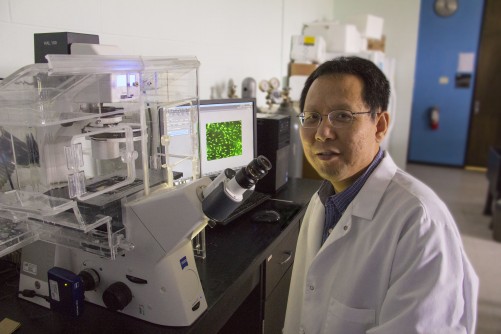 Newswise — Wichita State University's Li Yao is taking a special approach to the study of spinal cord injuries through research that uses an electrical signal to repair tissue damage.

When a person suffers neurological damage to their spinal cord, the tissues surrounding the injury site can die. But one of the body's defense mechanisms is the regeneration and migration of a type of support cell – called Schwann cells – to the injury.

Those cells, as has been discovered in recent years, help myelinate – or cover - nerve axons where the injury has occurred, which promotes the recovery of some of the spinal cord's function.

Yao, a biological sciences assistant professor, is studying how electrical signals can aim those cells directly to the injury site. His research, he hopes, will open new doors for the medical field to use electrical fields in the treatment of neural injuries.

"Electrical signal is a kind of ignored approach that may generate significant biological function in neural regeneration," Yao says.

Still, Yao's early findings suggest that the use of electrical fields in cell migration could become a burgeoning area of study in regenerative medicine.

"Our work has implications for central nervous system repair, and the application of an electrical field may assist with that," Yao says.

A photograph is available at http://www.wichita.edu/thisis/wsunews/newsrelease/highres/?pid=5388# # # # #