This is a drastic shift from current diagnosis methods, involving extensive interviewing of children, their parents, and their teachers — a time-consuming and often unreliable process. 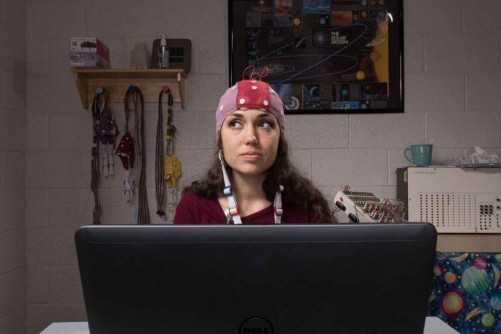 In a mock session, Sarah Hanson, an electrical engineering undergraduate researcher from Lynchburg, Virginia, tests out the attention-focused computer task that had been administered to the children participating in the longitudinal study.

Newswise — Despite the growing number of children and adolescents identified as having attention deficit hyperactivity disorder (ADHD), there is no objective diagnosis protocol. Current methods rely on subjective observations by parents, teachers, and physicians.

Louis Beex, professor in the Bradley Department of Electrical and Computer Engineering, is changing that process.

Beex has spent the last 15 years researching and developing a method to diagnose ADHD based on data alone, which may not even require a physician to be present. In collaboration with Martha Ann Bell, professor of psychology in the College of Science, Beex found that an electroencephalogram (EEG) can record data to discern the brain wave patterns associated with ADHD.

This is a drastic shift from current diagnosis methods, involving extensive interviewing of children, their parents, and their teachers — a time-consuming and often unreliable process.

Beex and his team are currently working with EEG data collected by Bell and her students in the Cognition, Affect, and Psychophysiology (CAP) Lab.

This data was recorded while children between the ages of 6 and 9, some of whom had already been diagnosed with ADHD, were actively engaged in computer tasks that required focus and motor skills. Electrodes placed on their heads recorded brain wave patterns as the children followed simple instructions based on visual cues.

“Brain signals can be thought of as rhythms or ribbons of frequency bands,” Beex said. “EEGs measure the signals as they change over time and frequency.”

By passing the signal through low- and high-pass filters, decimation, and multiresolution parametric spectral estimation, Beex and his team can look at these brain wave patterns on very fine timescales — so fine that they hope to trace where in the brain a signal originates as well as the pathways it travels.

Machine-learning techniques like K-Nearest Neighbor, Gaussian Mixture Models, and Universal Background Model classifiers helped the researchers select a combination of channels that would best show whether or not the subject had ADHD.

“We found that only two or three channels were relevant to ADHD detection if we were monitoring the brain during the attention tasks,” Beex said.

After analyzing the different channels and modeling the data, Beex and his students compared their findings to each child’s diagnosis. And although the research is limited by the amount of data available, the team has achieved 85 to 95 percent accuracy rates so far.

While much work remains, Beex believes this technology could revolutionize the way ADHD is detected and, subsequently, streamline how it is treated.

“We’ll be able to diagnose ADHD in a school cafeteria with a couple of electrodes hooked up to a laptop,” Beex said.

If a diagnosis is positive, he hopes that the same methods will also be used to test the effectiveness of behavioral therapy — interventions that can help children with ADHD manage their symptoms with no side effects and no long-term risks.

Ultimately, Beex is driven toward a further-reaching goal: he wants to know why humans develop this disorder in the first place and what, if anything, can be done to address it.

“By looking at the data in great detail and identifying the pathways involved, we are investigating ADHD, not as an inherent property in the architecture of the brain, but as something that developed,” Beex said.