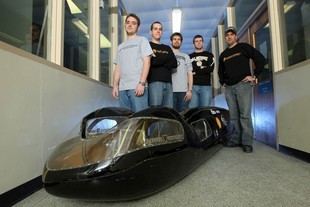 Newswise — With its light body made of Kevlar, sleek aerodynamic design and three Olympic-racing wheelchair tires, it looks like something that escaped from the Batcave.

But actually it's a school project by a team of six Dalhousie University senior mechanical engineering students.

The ultimate in fuel efficiency, the "Maritime Mileage Machine" will be entered in the 2009 Shell Eco-marathon Americas taking place on April 15 to 18 at the Auto Club Speedway in Fontana, California. The event challenges high school and post-secondary students across Canada, the U.S., Mexico and South America to design and build a vehicle that will drive the farthest using the least amount of energy.

The students who win will have a chance to make history and take home thousands of dollars in prize money.

"The main thing is to keep it simple and efficient," explains Matthew Harding, the team's manager. Other members include Liam Jeffrey, Craig Arthur, Chad Batterton, Brad Marcus and the driver Carmen McKnight. "The whole point of the competition is maximum fuel economy."

The team hopes to improve on the current Dalhousie record of 420 kilometres per litre on regular unleaded gas, with a vision to beat the record at the Shell Eco-marathon Americas of 1,445 kilometers per litre.

"Considering the average car is getting about 30 miles per gallon (or 13 kms per litre), that's pretty drastic."

Carmen McKnight, selected for her petite size, will drive the vehicle while lying in a hammock-like seat with a headrest to prop up her head. She steers the car using handles on either side of her body.

Circuits are about seven miles long and the race will last roughly 45 minutes a circuit.

The team's goal is to fine-tune their model and get in some practice time to be ready for the competition in April.