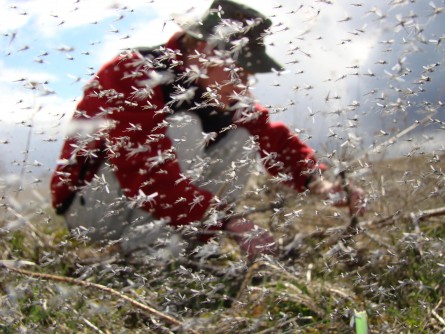 David Hoekman, a former postdoctoral researcher at UW–Madison, now an assistant professor at Southern Nazarene University, in a midge swarm in May 2008. 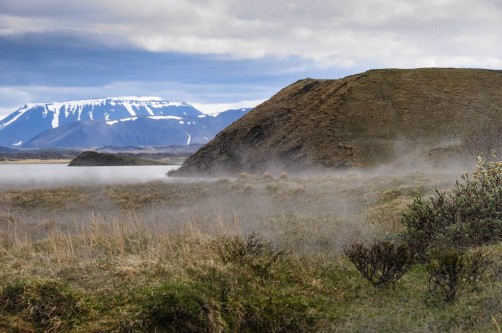 Resembling a blanket of fog, midges swarm near Lake Myvatn in June 2014.

Newswise — MADISON, Wis. — Swarms of midges rise out of a lake in northern Iceland in such enormous numbers every spring and summer that they can impair breathing and darken the sky, giving the lake its name — Myvatn, or “midge lake.”

Ecologists at the University of Wisconsin–Madison are trying to understand why the midge population can fluctuate by 100,000-fold across a decade, and what impact these massive swarms have on the surrounding landscape. It’s becoming clear that the billions of midges falling on land fertilize and alter the vegetation on the lakeside, but the cause behind such large fluctuations in the insects’ population remains a mystery.

The research aims to better understand lake-dominated environments, including those of Wisconsin.

Lake Myvatn sits at the edge of the Arctic Circle, where the sun barely sets during summer field work from May to August. The ecosystem is extreme, yet simple — a relatively small number of species, like the midges, dominate. This bare-bones environment is perfect for exploring complex interactions within ecosystems.

In 2005, when Claudio Gratton, a UW–Madison professor of entomology, first saw the huge numbers of midges rising out of the lake and dying on land, he thought of them as a living transfer of nutrients from water to shore. Gratton calculated that the midges were the nutritional equivalent of scattering a half-million Big Macs around the edge of the lake, which is about the size of Lake Mendota in Madison. He wondered how the lakeside responded to this nutritional glut.

To test how the midges alter the landscape, Gratton’s laboratory set up experimental plots in the vegetation around the lake. In some, they added dead midges; in others, they used netting to exclude them.

Over the years, Gratton’s team saw that where they added midges, grasses flourished. Normally starved of nutrients in the poor soil and outcompeted by heartier plants, the grasses took off in response to the influx of rotting-midge fertilizer. The research explained why grass grew in some areas and withered in others.

“Only by understanding the linkage between midges and grass can you explain this pattern in nature,” says Gratton. “The lake is causing that to happen.”

Local shepherds have long called the grass in midge-infested areas “midge grass” — they harvest the grass and feed it to their flocks. Gratton’s work suggested that the shepherds’ folklore contained a kernel of truth, and that midges might indirectly nourish the sheep by encouraging more grass growth.

Gratton was originally introduced to Lake Myvatn by Tony Ives, a UW–Madison professor of zoology, who has a lifelong connection to the island.

“I’ve been going to Iceland since I was a kid,” says Ives, whose middle name, Ragnar, was given to him in honor of an Icelandic farmer and friend of his father.

Ives learned about the unpredictable and large swings in midge population through Arni Einarsson, the director of the Lake Myvatn research station, who has studied the lake since the 1970s.

In a 2008 article in the journal Nature, Ives, Einarsson and their collaborators laid out a straightforward mathematical framework that might explain how the midge population spikes and crashes so dramatically and unpredictably. They suggested that small, random environmental changes — too much wind one year, or a late spring the next — could send the population crashing. But the true causes of this hair-trigger sensitivity remain elusive.

In the nine years since, the team has been searching for clues that can help them understand the population changes better. Each year, they measure water quality, nutrient concentrations, and the amount of lakebed algae among other factors that might affect the insects. Then they wait for the midges.

“Every year around this time I start holding my breath,” wondering how the dynamic midge population will respond in spring, says Ives. “It’s kind of like slow-motion suspense.”

Supported by a 10 year National Science Foundation grant for long-term research, Ives and his collaborators are waiting for the natural experiment to proceed through an entire population boom and bust. This year, the researchers might see the population crash — but they don’t know.

As the ecologists work to better understand the spare Lake Myvatn ecosystem, they are also extending their studies to the lake-filled Wisconsin landscape. Gratton and UW–Madison postdoctoral researcher Mireia Bartrons, now at the University of Vic in Spain, developed a model of how insect emergences from Wisconsin lakes affect lakeside ecosystems. With more than 15,000 lakes and 34 percent of the state lying within 200 meters of a lake or stream, the scientists expect aquatic insects to affect a large share of the state.

Gratton sees ecosystems, whether in Iceland or the American Midwest, as an interwoven tapestry of interactions rather than isolated patches of land or water.

“The character of the land would change without these lakes,” says Gratton. “Our landscapes are completely interconnected.” 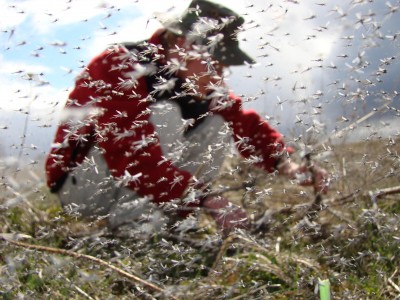 Caption: David Hoekman, a former postdoctoral researcher at UW–Madison, now an assistant professor at Southern Nazarene University, in a midge swarm in May 2008. 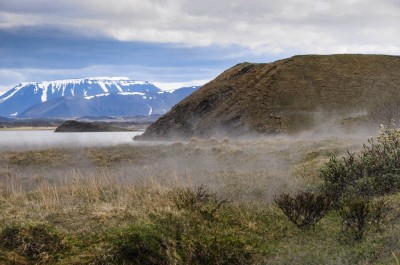 Caption: Resembling a blanket of fog, midges swarm near Lake Myvatn in June 2014.