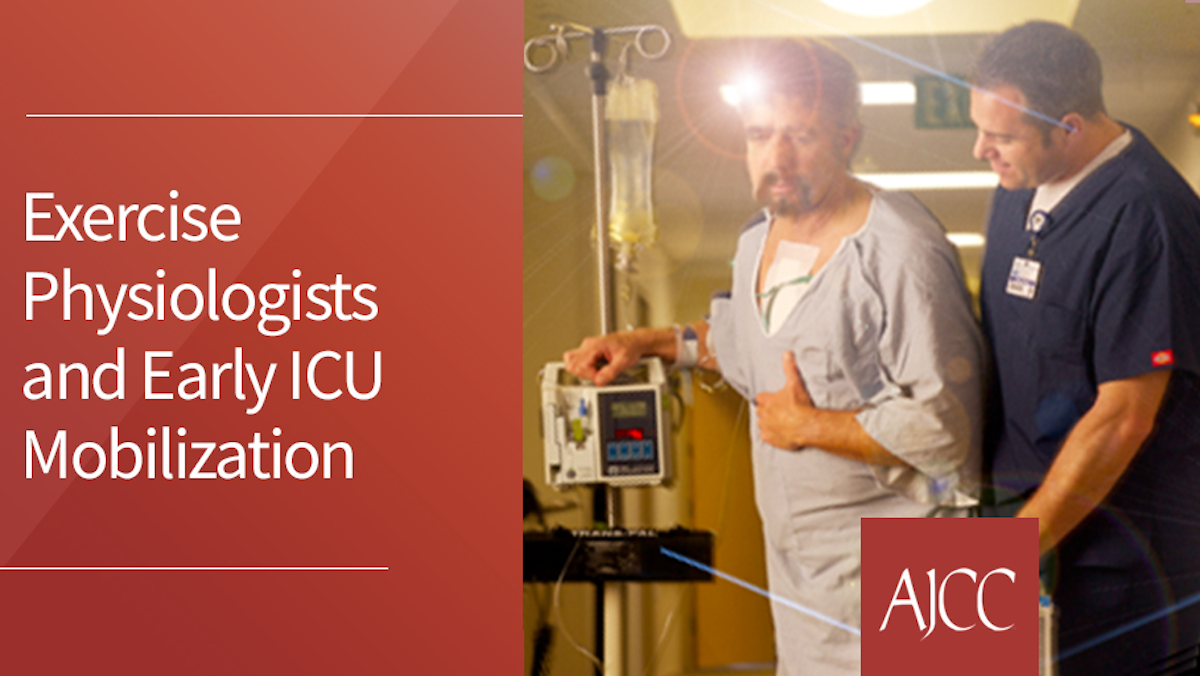 Exercise physiologists can play a key role in efforts to provide safe and effective early mobilization in ICUs, according to new research published in American Journal of Critical Care

Exercise physiologists have historically practiced in clinical settings, such as sports medicine and rehabilitation, but they are gaining visibility in hospitals as members of interdisciplinary clinical teams. Their focus on improving a patient’s strength, endurance, exercise and mobility make them an ideal team member to manage early mobility for critically ill patients.

“Exercise Physiologists: Key to Providing Early Mobilization in the Intensive Care Unit” reports the results of a three-month initiative to introduce exercise physiologists as mobility specialists in three medical-surgical ICUs at Baylor St. Luke’s Medical Center in Houston. During the study period, patients received a minimum of one treatment session per day with an exercise physiologist.

Exercise physiologists mobilized 82% of patients admitted to the ICUs during the study period. The remaining 18% of patients either did not meet the mobilization or safety criteria or were unavailable because of a medical or surgical procedure. In contrast, a prior study in the same ICUs found that only 8% of patients were mobilized by physical therapists.

The researchers encountered adverse events during less than 1% of mobility sessions with the exercise physiologists.

“ICU clinicians and hospital staff have long been frustrated by the immobility dilemma and, despite research about the benefits of mobility, critically ill patients often remain on bed rest for too long,” said co-author Claudia DiSabatino Smith, PhD, RN, NE-BC. “Our study demonstrates that adding exercise physiologists to the interdisciplinary team can drive early, aggressive and progressive ICU patient mobility.”

During the study, Smith was a nurse scientist at Baylor St. Luke’s Medical Center in Houston. She is now a nursing instructor at Cizik School of Nursing at the University of Texas Health Science Center at Houston.

The exercise physiologists worked closely with other members of the interdisciplinary team to develop an evidence-based mobilization program that incorporated best practices for all patients who met intensivist-generated criteria for ICU mobilization. They worked under the direction of a registered nurse/delirium coordinator, and the intensivist and the patients’ assigned registered nurses, in addition to collaborating with patient care assistants, respiratory therapists and physical therapists.

About the American Journal of Critical Care: The American Journal of Critical Care (AJCC), a bimonthly scientific journal published by the American Association of Critical-Care Nurses, provides leading-edge clinical research that focuses on evidence-based-practice applications. Established in 1992, the award-winning journal includes clinical and research studies, case reports, editorials and commentaries. AJCC enjoys a circulation of more than 120,000 acute and critical care nurses and can be accessed at www.ajcconline.org.

About the American Association of Critical-Care Nurses: Founded in 1969 with 400 members, the American Association of Critical-Care Nurses (AACN) is the world’s largest specialty nursing organization. In 2019, AACN celebrates 50 years of acute and critical care nursing excellence, serving more than 120,000 members and over 200 chapters in the United States. The organization remains committed to its vision of creating a healthcare system driven by the needs of patients and their families in which acute and critical care nurses make their optimal contribution. During its 50th anniversary year, AACN continues to salute and celebrate all that nurses have accomplished over the last half century, while honoring their past, present and future impact on the evolution of high-acuity and critical care nursing.