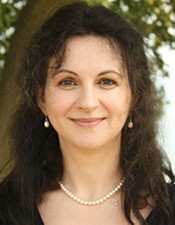 Marian’s pioneering research suggests that bilingual speakers process information differently than those who know a single language because the bilingual brain is constantly activating both languages and choosing what language to use and what language to ignore.

“It’s like a stop light,” Marian said. “Bilinguals are always giving the green light to one language and red to another. When you have to do that all the time, you get really good at inhibiting the words you don’t need,” she said.

When the brain is constantly exercised in this way, it changes how bilinguals perceive the world, said Marian, the Ralph and Jean Sundin Endowed Chair in Communication Sciences and Disorders and Professor of Psychology.

Using eye-tracking, mouse-tracking, EEG and FMRI data, Marian has demonstrated that the highly interactive and dynamic nature of the bilingual’s brain changes the way it functions.

Marian grew up speaking Romanian and Russian. English is her third language; she also speaks some basic Spanish, French and Dutch.

“It’s never too late to learn another language,” she said. “The benefits can be seen even after just one semester of studying.”

Marion will explain how bilingualism changes the brain during the 11th annual Pepper Lecture at Northwestern University.

Marian’s talk, titled “Bilingualism and its Consequences for Cognition, Language and the Brain,” is sponsored by Northwestern University’s School of Communication’s Roxelyn and Richard Pepper Department of Communication Sciences and Disorders.