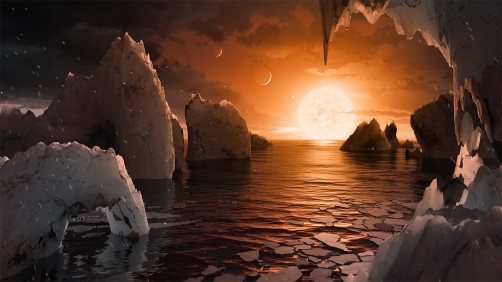 An artist's interpretation of what it might look like standing on the surface of the exoplanet TRAPPIST-1f.

Virginia Tech College of Science experts in planetary geophysics and extraterrestrial habitats are available to speak about the Wednesday announcement from NASA that the first known system of seven Earth-size planets has been discovered around a single star.

Scott King has studied exoplanets and their formation, while Jeb Barrett studies biological sciences in relation to Antarctica, a continent used by scientist to mimic and theorize about life on other planets.

BackgroundNASA made the announcement Wednesday and noted that three of these planets are firmly located in the habitable zone, an area around the parent star where a rocky planet most likely could support life-sustaining liquid water. This exoplanet system is called TRAPPIST-1, named for The Transiting Planets and Planetesimals Small Telescope (TRAPPIST) in Chile.

Quoting King“The result reported today by NASA regarding seven Earth-sized worlds around TRAPPIST-1 is very interesting, although to put it in perspective I have to say that if rocky planets are common, it would not be unexpected that you would eventually find a system with a large number of rocky bodies. As our search for extrasolar planets is in its infancy, it is hard to say whether rocky planets are common or uncommon.”

“That three of these seem to be in a distance range from the star that is in the so-called habitable zone is certainly tantalizing, but it is good to remember that Venus and Mars are also in the habitable zone, so simply being in the right distance range does not guarantee that liquid water is present.”

“It’s also worth remembering that NASA is planning a mission to Europa, which is thought to be a candidate for life, and this is outside the habitable zone. Additionally, organic molecules were found on Ceres as recently reported by NASA’s Dawn mission. It’s fairly early in the game so I expect many more surprises will be found.”

Quoting Barrett“This is a very exciting discovery. Biologists have learned over the past 20 years that life is found everywhere we look on Earth including the most extreme environments, from the freeze-dried desert soils of Antarctica to acidic hot springs in places like Yellowstone National Park. The very likely existence of liquid water on multiple planets in the TRAPPIST-1 system raises the probability of there being extraterrestrial life in the universe.”

About KingScott King is a professor of geophysics in the Department of Geosciences at Virginia Tech, where he focuses his research on the dynamics and evolution of the interior of the terrestrial planets. He has studied the thermal evolution of Venus using long-wavelength gravity field to address the resurfacing of Venus as evidenced by the small number of craters on the Venusian surface. He also has studied the volcanic evolution of Mars. His latest project involves research into Ceres, a minor planet that orbits Neptune.

About BarrettJeb Barrett is an associate professor in the Department of Biological Sciences. He studies soil ecology and biogeochemical cycling in the polar deserts of Antarctica, an analogue environment to potential extraterrestrial habitats that may host life, such as Mars. Barrett also is an affiliated faculty member of the Fralin Life Science Institute at Virginia Tech.

InterviewTo secure an interview with King or Barrett, contact Jordan Fifer in the media relations office by email at [email protected]​ or by phone at 540-231-6997.