Explore the Universe during AstroDay–Chile

B-roll video from 2018 showing events and activities for AstroDay–Chile. 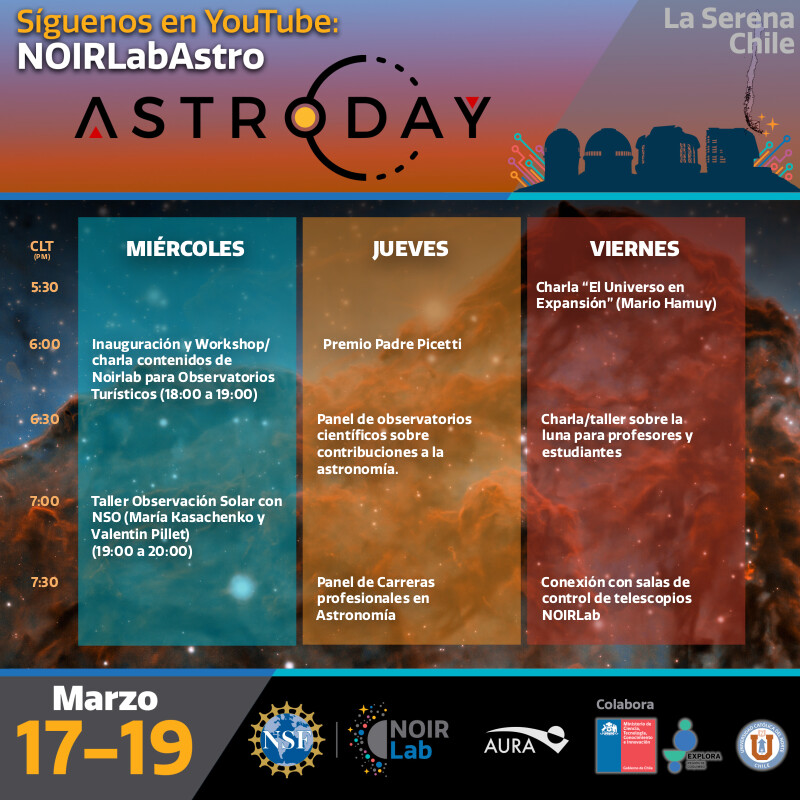 Newswise — AstroDay–Chile 2021 will begin on Wednesday 17 March 2021 at 6 p.m. CLST, and continue until Friday 19 March, concluding with a virtual connection with NSF’s NOIRLab’s telescope operators at Cerro Tololo Inter-American Observatory (CTIO), Gemini South and SOAR. This year the activities will be 100% online, but as always they will be completely free to attend.

Since 2007, AstroDay–Chile has been a very special annual tradition of the Coquimbo Region, with activities delivered in Spanish by staff from truly world-leading observatories based in Chile. This year, the participating observatories will be: NSF’s NOIRLab (including CTIO, Gemini South and SOAR); the European Southern Observatory (ESO); the Atacama Large Millimeter/submillimeter Array (ALMA), Carnegie Institution for Science, the National Solar Observatory (NSO) the Universidad de La Serena, the Universidad de Concepción, the Universidad de Antofagasta and Explora in the region of Coquimbo that supports the communication efforts for the event.

AstroDay–Chile’s audience is primarily families with children but it is also a good opportunity for high school students interested in pursuing science, engineering or mathematics, or for those considering a career at an observatory, to learn more about these careers.

On the first day of AstroDay–Chile, activities will include a workshop about astronomy for astrotourism guides (registration required) which includes solar observing led by staff from the National Solar Observatory.

On Thursday, the audience will be able to participate in a panel with astronomers from the main Chilean astronomy centers where they will showcase the most important discoveries made during the last year at their research centers. Later in the day there will be a career panel event that highlights the people who make the operation of professional telescopes possible.

The festival will also include the award of the AURA Padre Picetti Award 2020, which recognizes a Chilean teacher or another professional who dedicates themself to communicating science and astronomy. The award was created in 2014 by the Association of Universities for Research in Astronomy (AURA) the organization that operates CTIO, Gemini South and SOAR. This year the recipient was Maritza Arias, an incredibly active and innovative teacher from the Leonardo da Vinci School of Vicuña. The prize includes an 8-inch (20-centimeter) Dobsonian telescope and, after the site opens again, a night of observations at CTIO.

“We are proud to be organizing this prize for the sixth time and I am really happy that the recipient this year is a teacher from Vicuña, in the same area where our telescopes are located,” said AURA’s Head of Mission in Chile, Mario Hamuy. “That is important for AURA, because a new generation of children in the surrounding communities will learn more about the importance of astronomy for Chile and especially for the Coquimbo Region, and they will understand how important it is to protect their precious dark skies”.

On Friday afternoon, Mario Hamuy, AURA’s Vice President and Director in Chile, will present a talk on his latest book “The Universe in Expansion”. There will also be a workshop about our Moon, designed especially for children aged 5 to 9, and later a Zoom connection to the control room of Gemini South, SOAR and CTIO, which will allow participants to experience firsthand how astronomers prepare for a night's work.

All those interested in attending can find the times on the AstroDay–Chile 2021 webpage.

NSF’s NOIRLab (National Optical-Infrared Astronomy Research Laboratory), the US center for ground-based optical-infrared astronomy, operates the international Gemini Observatory (a facility of NSF, NRC–Canada, ANID–Chile, MCTIC–Brazil, MINCyT–Argentina, and KASI–Republic of Korea), Kitt Peak National Observatory (KPNO), Cerro Tololo Inter-American Observatory (CTIO), the Community Science and Data Center (CSDC), and Vera C. Rubin Observatory (in cooperation with DOE’s SLAC National Accelerator Laboratory). It is managed by the Association of Universities for Research in Astronomy (AURA) under a cooperative agreement with NSF and is headquartered in Tucson, Arizona. The astronomical community is honored to have the opportunity to conduct astronomical research on Iolkam Du’ag (Kitt Peak) in Arizona, on Maunakea in Hawaiʻi, and on Cerro Tololo and Cerro Pachón in Chile. We recognize and acknowledge the very significant cultural role and reverence that these sites have to the Tohono O'odham Nation, to the Native Hawaiian community, and to the local communities in Chile, respectively.