Famous rock art cave in Spain was used by ancient humans for over 50,000 years 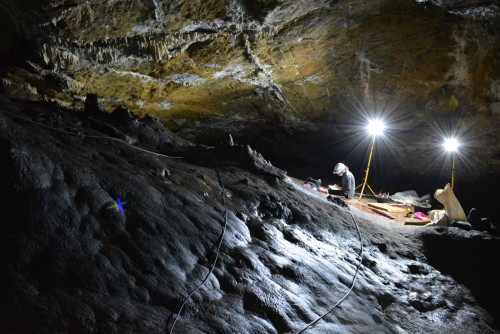 Excavation area in Cueva de Ardales with evidence from the Middle Palaeolithic period.

Newswise — A cave in southern Spain was used by ancient humans as a canvas for artwork and as a burial place for over 50,000 years, according to a study published June 1, 2022 in the open-access journal PLOS ONE by José Ramos-Muñoz of the University of Cadiz, Spain, and colleagues.

Cueva de Ardales, a cave in Málaga, Spain, is famous for containing over 1,000 paintings and engravings made by prehistoric people, as well as artifacts and human remains. However, the nature of human usage of this cave has not been well-understood. In this study, the authors present the results of the first excavations in this cave, which shed light on the history of human culture in the Iberian Peninsula. A combination of radiometric dating and analysis of remains and artifacts within the cave provide evidence that the site’s first occupants were likely Neanderthals over 65,000 years ago. Modern humans arrived later, around 35,000 years ago, and used the cave sporadically until as recently as the beginning of the Copper Age. The oldest rock art in the cave consists of abstract signs such as dots, finger tips, and hand-stencils created with red pigment, while later artwork depicts figurative paintings such as animals. Human remains indicate the use of the cave as a burial place in the Holocene, but evidence of domestic activities is extremely poor, suggesting humans were not living in the cave.

These results confirm the importance of Cueva de Ardales as a site of high symbolic value. This site provides an incredible history of human activity in Spain, and along with similar sites – there are more than 30 other caves in the region with similar paintings – makes the Iberian Peninsula a key locality for investigating the deep history of European culture.

The authors add: “Our research presents a well-stratified series of more than 50 radiometric dates in Cueva de Ardales that confirm the antiquity of Palaeolithic art from over 58,000 years ago. It also confirms that the cave was a place of special activities linked to art, as numerous fragments of ochre were discovered in the Middle Palaeolithic levels."

In your coverage please use this URL to provide access to the freely available article in PLOS ONE: https://journals.plos.org/plosone/article?id=10.1371/journal.pone.0266788

Funding: Excavations in Ardales were part of the project C 1 of the Collaborative Research Centre 806 “Our Way to Europe” funded by the German Research Foundation (DFG). In addition, the research in the Cueva de Ardales and its surroundings is included in the R&D 2017 Project: Analysis of prehistoric societies from the Middle Palaeolithic to the Late Neolithic on both sides of the Strait of Gibraltar. Relations and contacts, funded by FEDER/ Ministry of Science, Innovation and Universities. State Research Agency. HAR2017-87324P. A.P.M is a Serra Húnter fellow. A.P.M.’s research was supported by the Beatriu de Pinós postdoctoral program (Grant No. 2017 BP-A 00046), the Consolidated Research group program (Grant No. 2017 SGR 00011) of the Secretariat for Universities & Research of the Ministry of Economy and Knowledge, Government of Catalonia, and the R&D program from the Spanish Ministry of Science, Innovation and Universities (Project No. HAR2017- 86509-P). The funders had no role in study design, data collection and analysis, decision to publish, or preparation of the manuscript.