Columbia engineers and scientists develop novel ion driven transistor that enables real-time sensing and processing of body signals, a major building block for integrated bioelectronics with application to the brain and beyond 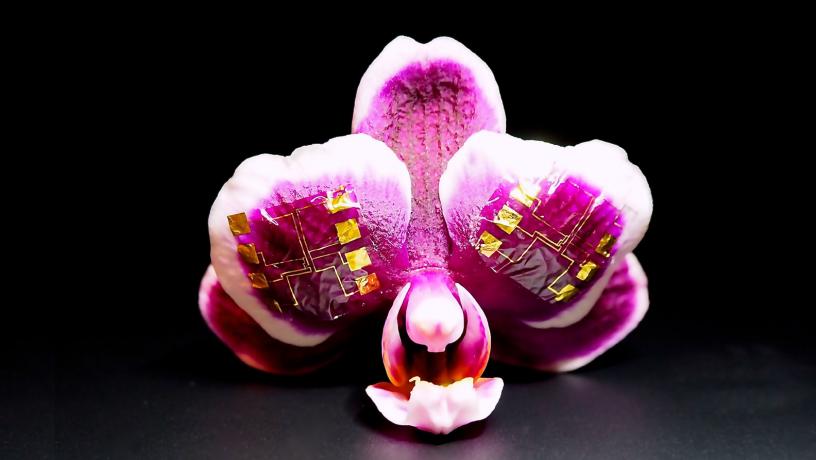 IGT-based NAND and NOR gates conform to the surface of orchid petals (left). Scale bar, 1cm. Optical micrographs of NOR (upper right) and NAND (lower right) logic gates. Input (I1, I2) and output (O) configuration is indicated. Scale bar, 100 μm. 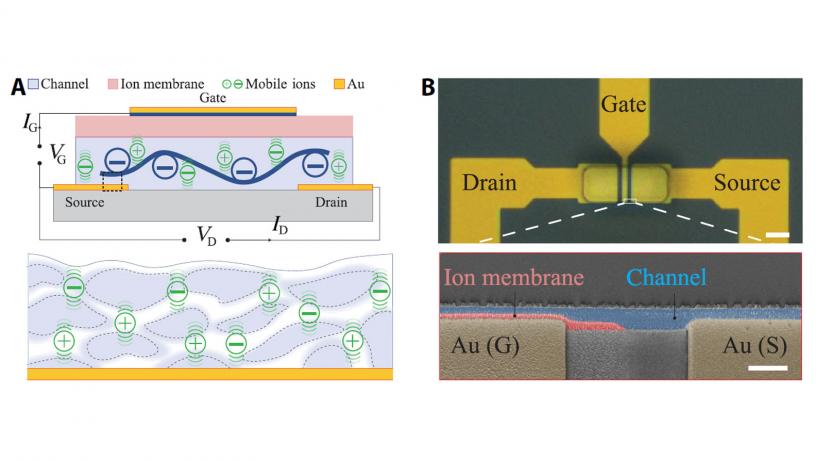 Columbia engineers and scientists develop novel ion-driven transistor that enables real-time sensing and processing of body signals, a major building block for integrated bioelectronics with application to the brain and beyond

Newswise — New York, NY—February 27, 2019—Many major advances in medicine, especially in neurology, have been sparked by recent advances in electronic systems that can acquire, process, and interact with biological substrates. These bioelectronic systems, which are increasingly used to understand dynamic living organisms and to treat human disease, require devices that can record body signals, process them, detect patterns, and deliver electrical or chemical stimulation to address problems.

Transistors, the devices that amplify or switch electronic signals on circuits, form the backbone of these systems. However, they must meet numerous criteria to operate efficiently and safely in biological environments such as the human body. To date, researchers have not been able to build transistors that have all the features needed for safe, reliable, and fast operation in these environments over extended periods of time.

A team led by Dion Khodagholy, assistant professor of electrical engineering at Columbia Engineering, and Jennifer N. Gelinas, Columbia University Medical Center, Department of Neurology, and the Institute for Genomic Medicine, has developed the first biocompatible ion driven transistor that is fast enough to enable real-time signal sensing and stimulation of brain signals.

The internal-ion-gated organic electrochemical transistor (IGT) operates via mobile ions contained within a conducting polymer channel to enable both volumetric capacitance (ionic interactions involving the entire bulk of the channel) and shortened ionic transit time. The IGT has large transconductance (amplification rate), high speed, and can be independently gated as well as microfabricated to create scalable conformable integrated circuits. In their study published today in Science Advances, the researchers demonstrate the ability of their IGT to provide a miniaturized, soft, conformable interface with human skin, using local amplification to record high quality neural signals, suitable for advanced data processing.

“We’ve made a transistor that can communicate using ions, the body’s charge carriers, at speeds fast enough to perform complex computations required for neurophysiology, the study of the nervous system function,” Khodagholy says. “Our transistor’s channel is made out of fully biocompatible materials and can interact with both ions and electrons, making communication with neural signals of the body more efficient. We’ll now be able to build safer, smaller, and smarter bioelectronic devices, such as brain-machine interfaces, wearable electronics, and responsive therapeutic stimulation devices, that can be implanted in humans over long periods of time.”

In the past, traditional silicon-based transistors have been used in bioelectronic devices, but they must be carefully encapsulated to avoid contact with body fluids—both for the safety of the patient and the proper operation of the device. This requirement makes implants based on these transistors bulky and rigid. In parallel, a good deal of work has been done in the organic electronics field to create inherently flexible transistors out of plastic, including designs such as electrolyte-gated or electrochemical transistors that can modulate their output based on ionic currents. However, these devices cannot operate fast enough to perform the computations required for bioelectronic devices used in neurophysiology applications.

Khodagholy and his postdoctoral research fellow George Spyropoulos, the first author of this work, built a transistor channel based on conducting polymers to enable ionic modulation, and, in order to make the device fast, they modified the material to have its own mobile ions. By shortening the distance that ions needed to travel within the polymer structure, they improved the speed of the transistor by an order of magnitude compared to other ionic devices of the same size.

“Importantly, we only used completely biocompatible material to create this device. Our secret ingredient is D-sorbitol, or sugar,” says Khodagholy. “Sugar molecules attract water molecules and not only help the transistor channel to stay hydrated, but also help the ions travel more easily and quickly within the channel.”

Because the IGT could significantly improve the ease and tolerability of electroencephalography (EEG) procedures for patients, the researchers selected this platform to demonstrate their device’s translational capacity. Using their transistor to record human brain waves from the surface of the scalp, they showed that the IGT local amplification directly at the device-scalp interface enabled the contact size to be decreased by five orders of magnitude—the entire device easily fits between hair follicles, substantially simplifying placement. The device could also be easily manipulated by hand, improving mechanical and electrical stability. Moreover, because the micro-EEG IGT device conforms to the scalp, no chemical adhesives were needed, so the patient had no skin irritation from adhesives and was more comfortable overall.

These devices could also be used to make implantable closed loop devices, such as those currently used to treat some forms of medically refractory epilepsy.  The devices could be smaller and easier to implant, and also provide more information.

“Our original inspiration was to make a conformable transistor for neural implants,” Gelinas notes. “While we specifically tested it for the brain, IGTs can also be used to record heart, muscle, and eye movement.”

Khodagholy and Gelinas are now exploring if there are physical limits to what kind of mobile ions they can embed into the polymer. They are also studying new materials into which they can embed mobile ions as well as refining their work on using the transistors to make integrated circuits for responsive stimulation devices.

“We are very excited that we could substantially improve ionic transistors by adding simple ingredients,” Khodagholy notes. “With such speed and amplification, combined with their ease of microfabrication, these transistors could be applied to many different types of devices. There is great potential for the use of these devices to benefit patient care in the future.”

The study was supported by Columbia Engineering and Columbia University. G.D.S is supported through the Human Frontiers Postdoctoral Fellowship Program.

The authors declare that they have no competing interests.