Study Published in ‘Proceedings of the National Academy of Sciences’ 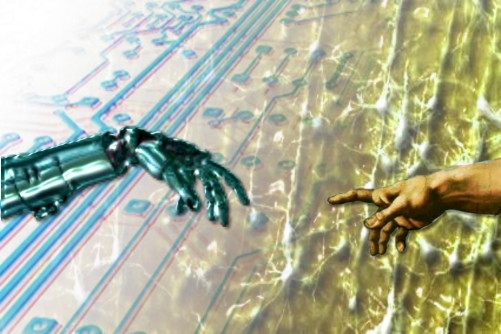 Newswise — BOCA RATON, Fla. (August 11, 2014) – Scientists at Florida Atlantic University’s Center for Complex Systems and Brain Sciences have created the Human Dynamic Clamp to address the difficult problem of studying social interactions in the laboratory. Their findings were released today in an article titled “The Human Dynamic Clamp as a Paradigm for Social Interaction” in the prestigious Proceedings of the National Academy of Sciences.

“While it is fairly easy to study one person’s behavioral and brain functions in the laboratory (including an individual’s response to social stimuli), until now it has been very difficult to investigate real time interactions between two people in a way that is conducive to identifying the underlying mechanisms,” said Guillaume Dumas, Ph.D., who did his postdoctoral work at FAU and is now a research scientist at the Pasteur Institute in Paris. “Ordinary social interactions between human beings are seldom static and involve a continuous process of back and forth exchange, making it difficult for scientists to measure or control the experiment.”

Using state-of-the-art human-machine interface technology, the Human Dynamic Clamp works by having humans interact with a computational model that behaves very much like humans themselves. In simple experiments, the model – on receiving input from human movement – drives an image of a moving hand which is displayed on a video screen. To complete the reciprocal coupling, the subject sees and coordinates with the moving image as if it were a real person observed through a video circuit. This social “surrogate” can be precisely tuned and controlled – both by the experimenter and by the input from the human subject.

“The Human Dynamic Clamp is important because it offers a path toward an intelligent, socially-competent technological agent that will work and play with humans as if it were one of them,” said Kelso.

“The sound design of the Human Dynamic Clamp may even surpass the original scope of the Turing test of humanness – whether a human judge can tell if an agent is a human being or a machine,” said Dumas.

In the future, the researchers aim to endow the Human Dynamic Clamp with mathematical laws for brain activity as well as behavior.

“A Human Dynamic Clamp with a brain could be subjected to neurological diseases or lesions,” said Tognoli. “The benefit would be to understand and remediate brain disorders that impact social interaction, one of the cores of human existence.”

Kelso and Tognoli have received multi-year funding for their research, “Neuromarkers of Social Coordination: A Dynamical Approach,” from the National Institute of Mental Health (grant number MH080838).

-FAU-About Florida Atlantic University: Florida Atlantic University, established in 1961, officially opened its doors in 1964 as the fifth public university in Florida. Today, the University, with an annual economic impact of $6.3 billion, serves more than 30,000 undergraduate and graduate students at sites throughout its six-county service region in southeast Florida. FAU’s world-class teaching and research faculty serves students through 10 colleges: the Dorothy F. Schmidt College of Arts and Letters, the College of Business, the College for Design and Social Inquiry, the College of Education, the College of Engineering and Computer Science, the Graduate College, the Harriet L. Wilkes Honors College, the Charles E. Schmidt College of Medicine, the Christine E. Lynn College of Nursing and the Charles E. Schmidt College of Science. FAU is ranked as a High Research Activity institution by the Carnegie Foundation for the Advancement of Teaching. The University is placing special focus on the rapid development of three signature themes – marine and coastal issues, biotechnology and contemporary societal challenges – which provide opportunities for faculty and students to build upon FAU’s existing strengths in research and scholarship. For more information, visit www.fau.edu.

Proceedings of the National Academy of Sciences Early Edition August 11