Higher dose, fewer injections for patients around the world 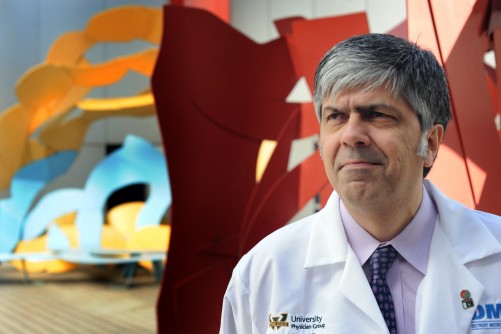 Newswise — Global research overseen by and conducted at the Wayne State University School of Medicine will immediately change the treatment regimen of millions of multiple sclerosis patients around the world.

The U.S. Food and Drug Administration Tuesday approved a new drug application that calls for the injection of Copaxone at a higher dose, but fewer times per week for patients with relapsing forms of multiple sclerosis.

“The availability of three-times-a-week Copaxone 40 mg/mL is a significant advancement for patients as they now have the option of effective and safe treatment with the drug, while reducing the number of injections by 60 percent,” said Omar Khan, M.D., professor and chair of neurology at the Wayne State University School of Medicine. “Patients in the United States can now benefit from an improved dosing regimen without compromising the known benefits of Copaxone.” The study was published in the Annals of Neurology, a leading clinical neuroscience journal and the official publication of the American Neurological Association.

Dr. Khan, a member of the Wayne State University Physician Group, is the global principal investigator of the Glatiramer Acetate Low-Frequency Administration, or GALA, study. The study investigated a new dose and frequency of glatiramer acetate (Copaxone) in patients with relapsing remitting multiple sclerosis. The study demonstrated that glatiramer acetate given in 40 mg doses subcutaneously three times a week is at least as effective as daily injections in achieving the drug’s immunologic effect and therapeutic efficacy.

The FDA approval is based on data from the Phase III GALA study of more than 1,400 patients, which showed that the higher dose injected three times a week significantly reduced relapse rates at 12 months and demonstrated a favorable safety and tolerability profile in patients with relapsing remitting MS.

Glatiramer acetate, commercially known as Copaxone and produced by Teva Pharmaceuticals, had been approved by the FDA for the treatment of relapsing forms of MS at a dose of 20 mg subcutaneously daily. It is the most prescribed medication for the treatment of MS, with annual worldwide sales exceeding $3.5 billion.

Medical experts estimate that more 2 million people in the world, more than 500,000 in the U.S., 30,000 in Michigan and 16,000 in metropolitan Detroit have MS. The Wayne State University MS Center is considered amongst the five largest MS centers in the country, with more than 4,000 patients.

“This study provides confirmation of a concept that originated at Wayne State University and will impact the entire field, including patients worldwide,” Dr. Khan said. “I take great pride in the fact that work done at Wayne State University led to this large international study, not only confirming our original work but changing the lives of people with MS in the world. This is truly translational work involving optimization of a peptide therapy without compromising its immunomodulating effect. For patients, it is great news, as reduced frequency of injections will improve compliance and tolerability while maintaining efficacy.”

Teva officials said the three-times-a-week Copaxone dose is available for shipping to distribution outlets immediately, and will be available to patients within days. The drug is approved in more than 50 countries worldwide, including the United States, Russia, Canada, Mexico, Australia, Israel and all European countries.

Dr. Khan said Wayne State University is now poised to submit a multi-center study to the National Institute of Neurological Disorders and Stroke later this year to take the concept a step further, even beyond the current dosing regimen.