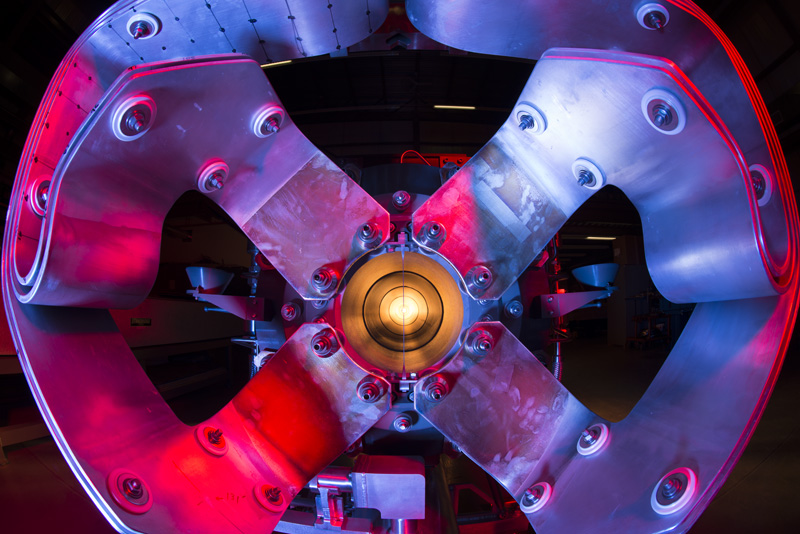 Newswise — The answer to one of the most fundamental questions in physics may lie in the universe's most abundant matter particle: the neutrino. But interpreting and verifying data from neutrino experiments require reducing uncertainties in some very complicated particle interactions.

To advance this pivotal work, Fermilab scientist Laura Fields received a U.S. Department of Energy Early Career Research Award, an annual recognition of rising scientists in universities and national laboratories. The five-year $2.5 million grant will support Fields in identifying and reducing uncertainties in the composition of neutrino beams — improving measurements and boosting confidence in physics experiments with important implications.

According to the working theories, the Big Bang should have generated roughly equal amounts of matter and antimatter, which annihilate one another upon contact. However, from what we can tell, the universe seems to be composed almost entirely of matter (otherwise our universe would be empty or perhaps full of the mysterious dark matter).

To pin down the root of this mystery, scientists are looking to neutrinos — ghostly particles that sail through the universe and pass undetected through your body by the trillion every second — for clues. Aside from being frustratingly difficult to detect, neutrinos have another strange quality: They shape-shift. There are three different types, or “flavors,” of neutrinos (electron, muon and tau types), and the particles oscillate between these states as they travel.

In the search for the root of the matter-antimatter asymmetry, scientists are studying whether neutrinos and antineutrinos oscillate in the same way. To test this hypothesis, the international Deep Underground Neutrino Experiment, or DUNE, hosted by Fermilab, will use magnetic instruments called focusing horns to produce beams of neutrinos and antineutrinos and measure their oscillation rates with two different detectors — a near detector on the lab site and a far detector underground in South Dakota. A difference between the shape-shifting tendencies of matter and antimatter particles would violate the supposed symmetry and could help scientists understand why everything exists.

Precise measurements of neutrino oscillations require precise simulations. Toolkits such as Geant4, widely used in high-energy physics, simulate the passage of particles through matter, predicting what happens when particles interact with nuclei to form new particles. But the models are not completely accurate.

“The problem is that we don’t really know very well how many neutrinos are in our beam or what their flavor and energy composition is,” Fields said. “Because of all of these uncertainties, what Geant4 predicts will happen in the beamline may not be exactly what happens.”

Fields is working to reduce the uncertainty in the number, energy and flavor — known collectively as the "flux" — of the neutrinos below the current estimate of 10%.

Scientists make up for flux uncertainties by taking more data on similar particle interactions in different contexts. The extra data on neutrinos and the particles that produce them allow for more accurate simulations and more confident inferences.

“In addition to oscillations, DUNE will also make a lot of measurements at the near detector looking for beyond-the-Standard Model physics,” Fields said. “And the better we know our beam, the more certain we can be that any unexpected data is due to some exciting new physics rather than not understanding our equipment.”

Fermilab accelerators produce the DUNE neutrino beams by shooting protons at a solid target. The proton-target interaction gives off charged particles that are focused into beams and then decay into neutrinos. Because the parent particles are charged and focused, the chargeless neutrinos continue on in the same direction.

Fields’s proposal aims to cut the beam flux uncertainty in half by studying and modeling the interactions that produce neutrinos in two different ways.

First, other experiments, including the NA61 at CERN where Fields is a collaborator, already study target-based nuclear interactions. Fields plans to bring a DUNE target core to the NA61 experiment and analyze the data to learn more about the particles that decay into neutrinos.

Second, the proposal calls for measuring the neutrino-producing particles after they’re focused by a magnetic horn. To date, nobody has  precisely studied these particles downstream of a focusing horn. To pull it off, Fields and her colleagues will use another Fermilab experiment, called EMPHATIC, and build a precision-motion table to move the detectors and scan the whole horn.

Aside from funding the construction of the precision-motion table and the transport and powering of a focusing horn, the Early Career Research Award grant will fund 50% of Fields’s time and cover two postdoctoral research associates who will help with data collection and analysis.

The data for uncertainty reduction will be made public and eventually used to tune Geant4 simulations and improve nuclear physics models. At the very least, Fields’s work will boost the accuracy and reliability of DUNE’s findings.

“Laura is doing the foundational work that is critical for an experiment like DUNE to succeed,” said James Amundson, Scientific Computing Division head at Fermilab. “Her effort should make the whole process more efficient so we can get more physics out of the experiment.”

Fermilab neutrino research is supported by the DOE Office of Science.