Fighting Bureaucracy by Improving It 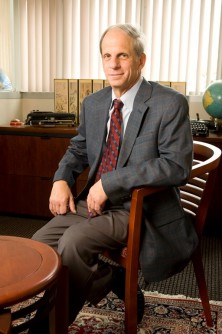 Newswise — If you’ve ever stood in line most of an afternoon at the DMV or some other government office wondering why the employees there didn’t seem to be doing anything, then Ed Rubin feels for you and wants to help.

“It seems safe to say that bureaucratic oppression, with all its variations, and in all its many settings, is part of every individual’s experience in modern society,” says Rubin, University Professor of Law and Political Science at Vanderbilt Law School. “Eliminating or reducing it can be regarded as desirable regardless of one’s political orientation.”

- Status differences: Although government officials no longer possess the highest status in society, they are often more prosperous and more educated than those who seek their help. “Wherever such superiority prevails,” Rubin writes, “it carries with it substantial opportunities for oppression. This oppression consists of scorn, peremptory treatment, a failure to empathize and, most seriously, unwillingness to perform the assigned task of benefit distribution, education or protection.”- Stranger relations: Benefits workers, social security administrators, police officers and medical personnel are typically dealing with large numbers of individuals whom they are unlikely to have known before or see very often again. Racial differences, moreover, may increase the sense of “otherness.”- Institutional pathologies: The administrative hierarchy that supervises bureaucracies can malfunction in oppressive ways. Examples include welfare and social security workers who are rewarded for minimizing the benefits they provide, police officers rewarded for making arrests and obtaining confessions rather than reducing crime, and doctors and nurses at public hospitals who are encouraged to treat and release patients quickly rather than make a thorough assessment of their medical condition. - Divergent incentives: Often, government agents don’t derive any direct benefit from providing effective or gracious service. “People’s instinctive sociability leads government officials to establish congenial relations with their colleagues,” Rubin says. “The citizens they serve, on the other hand, are often strangers. The prevailing sentiment may be to get rid of them, or minimize one’s dealings with them, rather than providing them the required service.”

- Due process, first provided in administrative settings by the 1970 Supreme Court decision Goldberg v. Kelly, grants citizens an oral or written hearing before their benefits are terminated or reduced. - Ombudspersons, an individual, office or agency that stands apart from the administrative hierarchy and is authorized to intervene in its procedures on behalf of individuals. - Client-centered administration, a management theory that seeks to modify or eliminate the procedures that produce oppression and to instill among the staff an ethos of client orientation, a prevailing attitude that the people for whom the agency provides benefits or services are to be treated as clients, or better still, as customers.- Market mechanisms, such as using school voucher programs where public schools receive public money based on how many students they attract, or placing agencies that are supported by user fees on a system where budgets are determined by the services they successfully provide.

All show promise, Rubin notes, but have limitations as well. Due process “can immerse the average person in a foreign world where strange, barely comprehended rituals lead to potentially disastrous results.” Ombudspersons have traditionally been legislative officials, and thus overly confrontational with administrators, or have lost their independence by being absorbed into the administrative hierarchy. Client-centered administration often amounts to little more than exhortations to “be nice.” Market mechanisms often undermine the purposes of the regulatory program, and require massive restructuring of public agencies that produces more problems than it solves.

Rubin suggests a new approach, a system of collaborative monitors that might overcome some of these limitations. It would provide officials external to the government bureaucracies whose role would be “based on the suggestion box rather than the complaint form.” Working with public officials and clients, the monitoring staff would “try to design new approaches or alter existing ones,” Rubin writes. “They could also run, or, more likely, sponsor, training or retraining programs for the agency employees.”

Whatever the strategy, it’s important to address the problem of bureaucratic oppression without abandoning the crucial programs that our democratic society has developed and supported in order to make our complex, technological society more just and more humane, Rubin says.