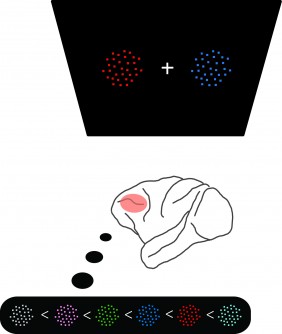 Coloured stimuli shown to animals during trials. The area shaded in red represents the dorsolateral prefrontal cortex of the brain

Newswise — Until now, it has been assumed that people with diseases like ADHD, Tourette syndrome, obsessive compulsive disorder and schizophrenia – all of whom characteristically report symptoms of ”brain clutter” – may suffer from anomalies in the brain’s prefrontal cortex.

Damage to this brain region is often associated with failure to focus on relevant things, loss of inhibitions, impulsivity and various kinds of inappropriate behaviour. So far, exactly what makes the prefrontal cortex so essential to these aspects of behaviour has remained elusive, hampering attempts to develop tools for diagnosing and treating these patients. But new research by Julio Martinez-Trujillo, a professor in McGill University’s Department of Physiology and Canada Research Chair in Visual Neuroscience, has brought new hope to these patients. He believes the key to the “brain clutter” and impulsivity shown by individuals with dysfunctional prefrontal cortices lies in a malfunction of a specific type of brain cell. Martinez-Trujilo and his team have identified neurons in the dorsolateral sub-region of the primate prefrontal cortex that selectively filter out important from unimportant visual information. The key to the normal functioning of these “filter neurons” is their ability to, in the presence of visual clutter, selectively and strongly inhibit the unimportant information, giving the rest of the brain access to what is relevant. “Contrary to common beliefs, the brain has a limited processing capacity. It can only effectively process about one per cent of the visual information that it takes in,” Martinez-Trujilo said. “This means that the neurons responsible for perceiving objects and programming actions must constantly compete with one another to access the important information.

“What we found when we looked at the behaviour of the neurons in the prefrontal cortex, was that an animal’s ability to successfully accomplish a single action in the presence of visual clutter, was dictated by how well these units suppressed distracting information.” These results could be highly relevant for identifying the causes and improving the diagnosis and treatments of a wide range of mental disorders including ADHD and schizophrenia. The research was conducted by Therese Lennert, a PhD student who holds a Vanier Scholarship, and it was funded by the Canada Research Chair program, Canadian Institutes of Health Research (CIHR), EJLB Foundation, and Natural Sciences and Engineering Research Council of Canada (NSERC). The study will be published in NeuronFor an abstract of the article: http://www.elsevier.com/wps/find/journaldescription.cws_home/621183/description#description