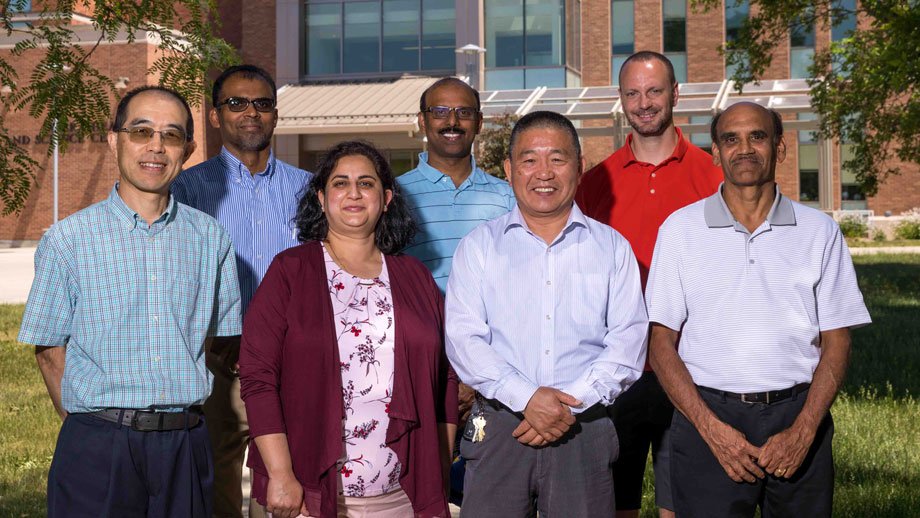 Newswise — Developing new formulations and therapeutic targets for approved drugs may help treat cancer and other diseases. This is the concept behind the South Dakota State University-led Center for Drug, Disease and Delivery, which recently received a five-year, $3.9 million award from the South Dakota Research and Commercialization Council.

The 3D (Drug, Disease and Delivery) Center will provide an integrated framework for drug development and build academic, industry and clinical partnerships to advance these new treatments, according to director Om Perumal, a professor and head of SDSU’s Department of Pharmaceutical Sciences. Associate professor of pharmaceutical sciences Joshua Reineke will be the center’s associate director.

“This was definitely a team effort from those within and outside SDSU to get all the pieces together, but the timing was right,” Perumal said. He acknowledged the integral role state funding for the Translational Cancer Research Center, which concluded its work in 2015, and infrastructure-building grants as well as a $1.1 million commitment for bridge funding from Kevin and Lorie Haarberg through the SDSU Foundation played in making this center possible.

Kevin Haarberg is a 1979 pharmacy graduate and. Lorie lost both parents to cancer in their 50s. That has motivated them to invest in research within the College of Pharmacy and Allied Health Professions. “Their commitment to the center made our proposal stand out from the others,” Perumal said.

The research team includes 11 SDSU faculty members from three departments as well as the university’s Office of Technology Transfer and Commercialization and two South Dakota School of Mines and Technology researchers. Eight private-sector partners, including Avera Cancer Institute and Vance Thompson Vision, are also involved in the center.

In addition to advancing existing pharmaceutical technologies at SDSU and South Dakota Mines, the 3D center will use a collaborative framework to create intellectual property through interdisciplinary projects and to foster an entrepreneurial mindset to strengthen the state’s biomedical and pharmaceutical workforce. The research will address diseases affecting human and animal health.

The 3D Center is one of three projects to receive RCC funding through the Governor’s Center Program, which provides seed funding to support applied research and development centers involving South Dakota universities, businesses and private sector research organizations. The RCC seeks to increase research and development that will make an economic impact through technology commercialization and the development of research-based industry clusters.

Repurposing drugs that have already been FDA-approved can shorten the timeline and decrease the costs of bringing new treatments to market, Perumal said.

“An estimated 40% of drugs fail during development because the biological and delivery properties of the compounds are not optimal. It works on cells in a culture dish, but to be absorbed in the human body, it must be water-soluble. Or it may have worked well in the animal studies, but animals and humans metabolize drugs differently,” he continued

The center’s researchers will look at modifying the drug to make it better absorbed or long acting. “To reduce toxicity, we can perhaps put the drug in a delivery system that targets the tumor,” Perumal said. “It’s like taking an old car and refurbishing it.”

One classic example of repurposing is aspirin, a 100-year-old drug. In its original form, the pain reliever can cause increased bleeding on long-term use. Taking clues from this side effect, the repurposed, low-dose aspirin is now commonly used to prevent blood clots in those with cardiovascular disease—and has also been shown to lower the risk of colorectal cancer.

During the next five years, four research projects with high potential for competing for external federal and private funding and developing technologies of interest to industry partners will receive center funding for a maximum of two years. The first two projects will begin next year.

The first project, led by professor Hemachand Tummala, will further develop a targeted therapy designed to reduce the side effects and increase the effectiveness of a commonly used chemotherapy drug. The initial disease target is ovarian cancer. The team includes associate professor Komal Raina, the Haarberg Chair in Cancer Research, along with Avera Cancer’s chief medical officer Dr. John Lee.

A second project, led by associate professor Gudiseva Chandrasekher, responds to the shortage of quality, implantable donor corneas by developing a new biomaterial for making corneal implants. South Dakota Mines assistant professor of nanoscience and engineering Scott Wood will also work on the project. The team will have guidance from ophthalmologist Vance Thompson.

Besides these lead projects, the center will also provide funding for new interdisciplinary projects by soliciting grant applications from academic and private institutions in the state.

“This new center will give us a big boost and expedite these research projects by at least five years,” Perumal said. “We are fortunate to have a state interested in investing in people and research.”