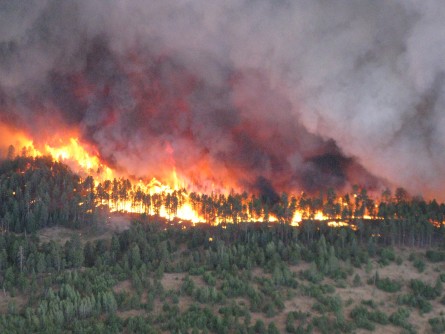 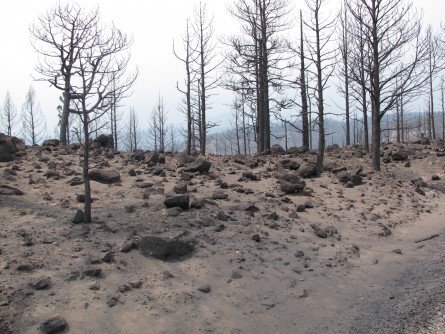 Santa Fe National Forest shortly after the 2011 Las Conchas Fire burned through the area with high intensity. It resulted in total tree mortality and removal of all surface organic matter and vegetation. 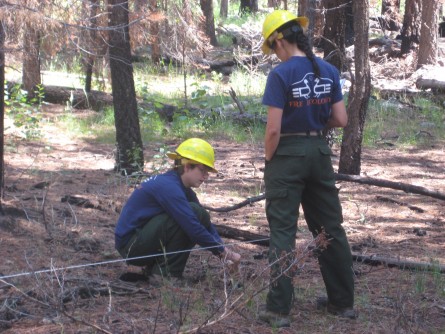 Newswise — Dec. 12, 2018 - Fire and water. Timeless, opposing forces, they are actually linked in powerful ways that can have major impacts on communities and ecosystems.

The 2011 Las Conchas mega-fire in New Mexico burned more than 150,000 acres and threatened the Los Alamos National Laboratory. Now, using data from the fire, researchers at Los Alamos have created an experimental model that will help us better understand the interactions of fire and water in the soil.

Adam Atchley, a researcher at Los Alamos National Laboratory, and his team set off with a goal: to evaluate how the soil's water balance changes before and after a fire, depending on the burn severity.

They designed an experimental model to simulate the effects of wildfire on the water balance of a burned site. The model used actual site condition measurements in the Las Conchas fire region. These measurements were taken several years before the fire by the Bandelier Fire Ecology Field Team. The model also incorporated burn severity data from the wildfire.

They found low- to moderate-severity wildfires result in wetter soil.

Water leaves soil in multiple ways. Water can move through plants, escaping as vapor through pores in the leaves. This is called evapotranspiration. When vegetation is burned, evapotranspiration is typically reduced until plants regrow. As a result, less water is pulled out of the soil. It remains wetter.

Surface runoff is another mode of water movement. Wildfire can make the soil more vulnerable to this moisture loss. Fire removes the absorbent layers of fallen and decaying plant matter on the forest floor. These layers, called litter and duff, can store more moisture than soil can. Without these layers, heavy rain can provide more water than the ground can absorb. This contributes to surface runoff.

“It is well known that fire disturbances can have a strong effect on how water interacts with land,” said Atchley. “Fire often dramatically increases flashy runoff responses to storms following the fire disturbance. But it also reduces evapotranspiration. What is not well understood, and is hard to measure, is how these two competing processes change the site water balance, or how wet or dry a burn site will be after the fire. Increasing the runoff would make the site drier overall while decreasing the evapotranspiration will keep water on the site and make it wetter,” Atchley said.

The soil and vegetation conditions that affect moisture after a wildfire will also change over time. For initial site recovery and water management planning after a wildfire, these findings have important implications. 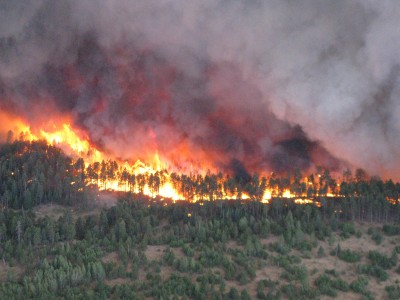 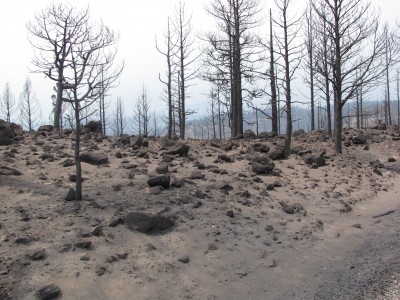 Caption: Santa Fe National Forest shortly after the 2011 Las Conchas Fire burned through the area with high intensity. It resulted in total tree mortality and removal of all surface organic matter and vegetation. 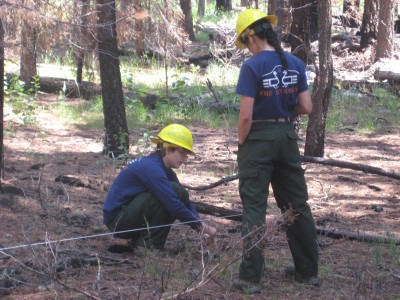