Twenty one boys have undergone initial testing at Cincinnati Children's. 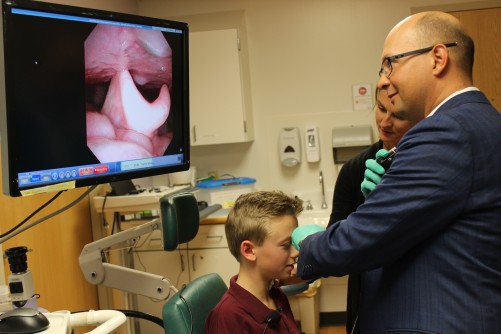 Newswise — The first round of tests have been completed for members of the Cincinnati Boychoir who are part of a joint study with Cincinnati Children’s Hospital Medical Center to look at the changing voices of male singers.

This groundbreaking study is being done to better understand how puberty affects the singing voice.

"In the early traditions of the boychoir, you were sidelined when your voice started to change. In Europe, this is still the case in some boychoirs," said Christopher Eanes, DMA, Artistic Director for the Cincinnati Boychoir. "We feel it's important to keep these boys singing all the way through."

Boychoir singing is an art form dating back more than 1,000 years. The Cincinnati Boychoir, founded in 1965, is composed of more than 250 young men from 100 schools in Ohio, Kentucky and Indiana.

“From a singing voice perspective, one of the things we don’t know in certainty is whether we should be training voices through puberty or whether they should stop singing through puberty.This study will help guide us with information through that process,” said Wendy LeBorgne, Ph.D., CCC-SLP, a voice pathologist with the Professional Voice Center of Greater Cincinnati and co-investigator of the study.

The purpose of this study is to examine the vocal fold vibration patterns, aerodynamic, acoustic, and perceptual voice changes as boys who sing progress through puberty. Currently, 21 boys with unchanged voices between the ages of 7 to 12 years are enrolled and being evaluated.

Over the last month, computer software has recorded the boys’ talking and singing voices in a sound booth to measure pitch, loudness, airflow and air pressure.

“We want to measure what happens as the air comes up from the lungs into the area of the larynx that makes the vocal cords vibrate, which produces the sound of the voice,” said Barbara Weinrich, Ph.D., CCC-SLP, a researcher in speech-language pathology at the Center for Pediatric Voice Disorders at Cincinnati Children’s.

There are only a few studies to date in the United States looking at the performing voice. This study will be significantly different because each boy participating is having an endoscopic procedure.

“A flexible endoscopy is where we take a little telescope that looks like a piece of spaghetti and we put it in the nose to look through the nose, around the palate, to the top of the voice box,” said Alessandro de Alarcon, MD, MPH, with the Division of Pediatric Otolaryngology at Cincinnati Children’s. “The image quality from the telescope is phenomenal. It’s the primary way we identify problems in the voice box.”

The recordings from the endoscopy create baseline measures and will track how the vocalcords change or thicken through puberty leading to a deeper voice.

The study entitled "Perceptual and Objective Measures of Boychoir Voices during the Phases of Pubertal Voice Mutation" is being conducted at the Cincinnati Children’s Center for Pediatric Voice Disorders over the next several years.

The research team is going to evaluate the current data and develop initial findings. When the boys begin experiencing a vocal change, they will be evaluated again. There will be at least 3 evaluations per boy as they mature into their adult voice.

The data collected from this study will be presented at conferences attended by voice scientists, speech-language pathologists, surgeons, voice teachers, performing artists, and students seeking the most up-to-date research findings.

“This will be very helpful in terms of informing choir directors and vocal coaches in what they can do to assist boys and their family so they have a better understanding of what’s happening. They can choose to continue singing versus stop performing,” said Weinrich.