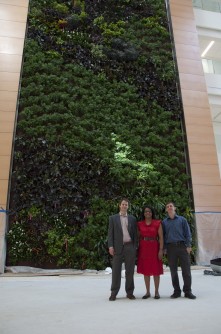 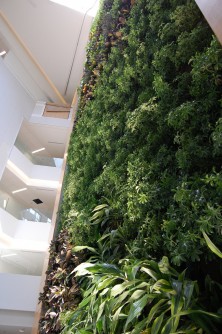 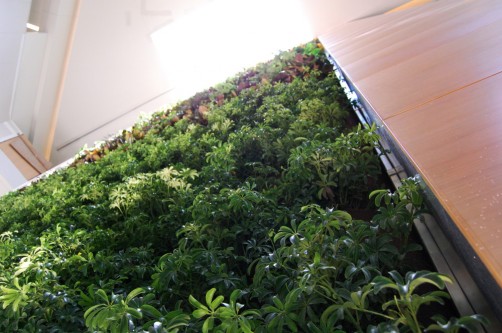 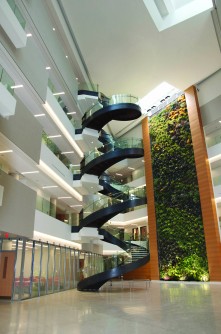 Atrium of the Papadakis Integrated Sciences Building at Drexel University.

Newswise — Just beyond the DNA-like helical staircase in Drexel University’s new Papadakis Integrated Sciences Building, the atrium’s great showpiece is a vertical wall of living plants, 20 feet wide, rising five stories (75 feet) in height – the largest such wall in North America and the only one at a U.S. university. But the biowall is not just for show. It is an active living filter that removes volatile organic compounds (VOCs) from the air. Scientists and students at Drexel are studying the biowall and the plant and microbe communities responsible for its air filtration properties to get a better understanding of how it works.

About the BiowallBiowalls such as the one at Drexel have been shown to reduce overall concentrations of VOCs, such as benzene, toluene, methyl-ethyl ketone, and formaldehyde, in the indoor air. Biowalls save energy by making it possible to recirculate a larger proportion of cleaner, conditioned air through the building, while bringing in less outdoor air that would require heating or cooling to match indoor conditions.

Drexel’s biowall consists of over 12 different varieties of tropical plants that grow in the absence of soil. The plant roots are embedded between two layers of woven, porous material similar to that of a kitchen scrubbing pad. Water trickles down the wall between these layers, providing plant roots with nutrients and hydration. The water is also key to filtering the air: Fans running behind the wall continuously pull contaminated indoor air through the biowall’s porous materials. As a result, VOCs naturally dissolve into the water and become available to bacteria and fungi on the plants’ roots. These microbes then consume and break down the VOCs into benign products, primarily carbon dioxide and water. As the microbes remove VOCs from the water, more VOCs can be absorbed from the circulating air, and the cycle continues. According to estimates by NEDLAW Living Walls, the company that designed and installed Drexel’s biowall, the wall is capable of generating between 16,000 and 30,000 cubic feet of ‘virtual’ outside air per minute.

While scientists have measured the overall results of this air filtration mechanism in biowalls, Waring points out that such measurements are coarse – measuring only the total concentration of VOCs in the air before and after passing through a biowall. Researchers don’t yet know specifically which chemicals are or are not being filtered out, while few have studied the microbes in plant roots that are responsible for breaking down VOCs. These are exactly the questions the Drexel team plans to address.

Drexel’s Biowall ResearchMimicking the Biowall in the LabIn one part of their study, the researchers will evaluate a small-scale aeroponic growing system to determine if such bench-scale designs can be used for efficient research into biowall systems. “If we find out that it closely mimics microbial communities and VOC removal on the wall itself, this is something that researchers can use to set up in their labs to quickly do research for biowalls without needing the biowall itself,” Waring said.In their laboratory apparatus, the researchers will suspend plants’ roots inside a chamber and measure the concentrations of chemicals in air flowing out of the chamber. Waring will then compare these measurements to samples taken from full-scale work on the biowall itself, using air samples drawn from each of eight sampling ports built into the back of the wall for research use. In their biological studies, described in more detail below, Russell and Anandan will compare the microbial communities in the model system with those found on the biowall.

“One of the really exciting things about this project is that we can test what the wall does in a real building rather than just presume that it works as well as it’s supposed to,” Waring said.

Studying Microbial Communities in the Plants’ RootsWhile Waring’s efforts will indicate which plants harbor the root communities that are best at purifying the air, Russell and Anandan’s will shed light on the microbial species that are responsible for that purification.

The researchers will expose microbial communities to various types of chemicals in the aeroponic system in the lab. “We’re looking to see, when exposed to a particular chemical, do particular microbes proliferate?” Russell said.

To identify the microbes, Russell’s team will perform a kind of molecular barcoding to identify them by their DNA. The bar codes are much like a DNA fingerprint, but “instead of trying to match samples from a crime scene to an individual, we’re looking at a small microscopic community to understand everything that’s living there,” Russell said.

Russell will eventually examine not just what genes are present in the microbe communities, but what genes are actually expressed as the chemical environment changes. It is possible that microbes can turn on helpful genes when exposed to VOCs that help break down the chemicals more quickly.

Hundreds if not thousands of species of microbes may exist on the plants’ roots, but not all are actively involved in breaking down VOCs. According to Anandan, it is likely that a consortium of microbe species is responsible for the breakdown of chemicals, like “a conveyor belt of microbes, each with a specific step of breakdown.”

Anandan will cultivate living microbes in the lab and work to identify which microbes are active in these conveyor belts and what molecular processes they use to break down VOCs. Ultimately, it may be possible to grow populations of VOC-consuming microbes to use as a treatment on the roots of biowall plants that need a boost.

A Truly Integrated Sciences Building: Biowall Research in Building Design and Hands-On EducationDrexel’s biowall was designed and installed by NEDLAW Living Walls in collaboration with Toronto-based Diamond and Schmitt architects, who designed the building. Waring and other Drexel faculty members collaborated with the designers and architects to ensure that the physical structures of the building were fully compatible with their plans for research on the biowall. Eight sampling ports at locations behind the biowall, where researchers can collect air samples to measure the concentration of chemicals, were built into the structure to Waring’s specifications.

Biowall research is also integrated with hands-on education in the new building: Both Russell’s and Waring’s labs employ Drexel students through the University’s co-operative education program. The students work full-time as lab employees conducting hands-on research on the biowall and its plants and microbes.

Many of the science faculty at Drexel are integrating biowall science into the curriculum. Anandan said she incorporates the biowall into her instruction of freshman students. “This is biology in action,” Anandan said. “What you’re seeing is a biological application in real life, coupled with engineering, that works to do something that we think is going to improve human health.”

Learn more about the Papadakis Integrated Sciences Building at http://www.drexel.edu/now/professionals/releases/archive/2011/September/Drexel-Opens-Nations-First-University-Facility-with-Biowall/ 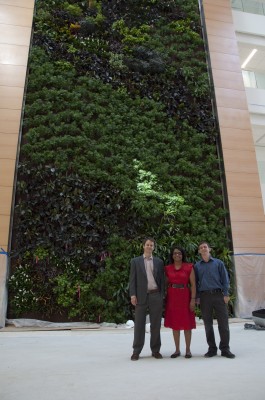 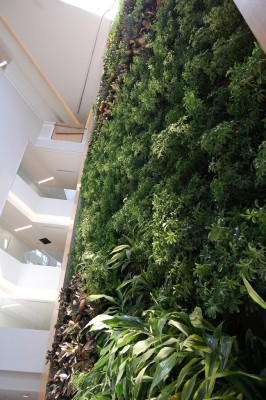 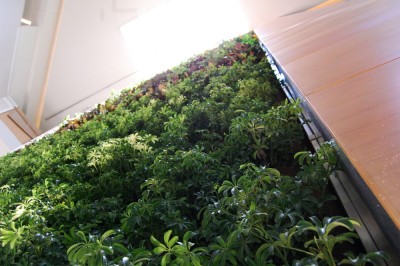 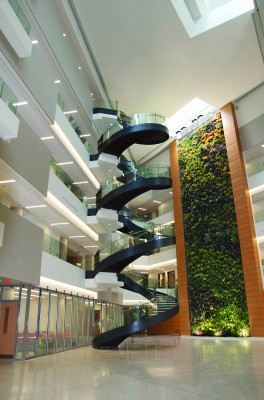