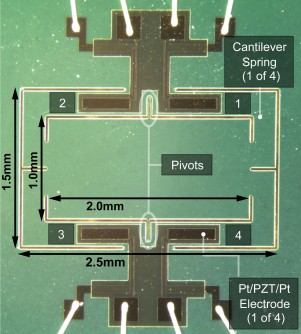 A photograph of the biologically-inspired microphone taken under a microscope, providing a top-side view. The tiny structure rotates and flaps about the pivots (labeled), producing an electric potential across the electrodes (labeled).

Newswise — WASHINGTON D.C., July 22, 2014 – Even within a phylum so full of mean little creatures, the yellow-colored Ormia ochracea fly is distinguished among other arthropods for its cruelty -- at least to crickets. Native to the southeastern U.S. states and Central America, the fly is a most predatory sort of parasite. It swoops onto the back of a singing male cricket, deposits a smear of larvae, and leaves its wicked brood to invade, kill and consume the cricket from inside out.

None of this would be possible without the fly's ability to find a cricket -- the cornerstone of its parasitic lifestyle. The fly can pinpoint the location of a chirping cricket with remarkable accuracy because of its freakishly acute hearing, which relies upon a sophisticated sound processing mechanism that really sets it apart from all other known insects.

Now a team of researchers at the University of Texas at Austin has developed a tiny prototype device that mimics the parasitic fly’s hearing mechanism, which may be useful for a new generation of hypersensitive hearing aids. Described in the journal Applied Physics Letters, from AIP Publishing, the 2-millimeter-wide device uses piezoelectric materials, which turn mechanical strain into electric signals. The use of these materials means that the device requires very little power.

"Synthesizing the special mechanism with piezoelectric readout is a big step forward towards commercialization of the technology," said Neal Hall, an assistant professor in the Cockrell School of Engineering at UT Austin. "Minimizing power consumption is always an important consideration in hearing-aid device technology.

There are military and defense applications as well, and Hall's work was funded by the Defense Advanced Research Projects Agency (DARPA). In dark environments, for instance, where visual cues are not available, localizing events using sound may be critical.

Humans and other mammals have the ability to pinpoint sound sources because of the finite speed of sound combined with the separation between our ears. The spacing of several centimeters or more creates a slight difference in the time it takes sound waves to hit our ears, which the brain processes perceptually so that we can always experience our settings in surround sound.

Insects generally lack this ability because their bodies are so small that sound waves essentially hit both sides simultaneously. Many insects do detect sound vibrations, but they may rely instead on visual or chemical sensing to find their way through the fights, flights and forages of daily life.

O. ochracea is a notable exception. It can locate the direction of a cricket's chirp even though its ears are less than 2 mm apart -- a separation so slight that the time of arrival difference between its ears is only about four millionths of a second (0.000004 sec).

But the fly has evolved an unusual physiological mechanism to make the most of that tiny difference in time. What happens is in the four millionths of a second between when the sound goes in one ear and when it goes in the other, the sound phase shifts slightly. The fly's ear has a structure that resembles a tiny teeter-totter seesaw about 1.5 mm long.

Teeter-totters, by their very nature, vibrate such that opposing ends have 180-degree phase difference, so even very small phase differences in incident pressure waves force a mechanical motion that is 180 degrees out of phase with the other end. This effectively amplifies the four-millionths of a second time delay and allows the fly to locate its cricket prey with remarkable accuracy.

Such an ability is almost the equivalent of a human feeling an earthquake and being able to discern the direction of the epicenter by virtue of the difference in time between when the right and left foot first felt the tremor -- except the fly's hearing is even more sensitive than that, said Hall.

The pioneering work in discovering the fly's unusual hearing mechanism was done by Ronald Miles at Binghamton University and colleagues Ronald Hoy and Daniel Robert, who first described the phase amplification mechanism the fly uses to achieve its directional hearing some 20 years ago. In 2013, Miles, and his colleagues presented a microphone inspired by the fly’s ears. (See related release: http://newswise.com/articles/researchers-design-sensitive-new-microphone-modeled-on-fly-ear)

Inspired by Miles’s prior work, Hall and his graduate students Michael Kuntzman and Donghwan Kim built a miniature pressure-sensitive teeter-totter in silicon that has a flexible beam and integrated piezoelectric materials. The use of piezoelectric materials was their original innovation, and it allowed them to simultaneously measure the flexing and the rotation of the teeter-totter beam. Simultaneously measuring these two vibration modes allowed them to replicate the fly’s special ability to detect sound direction in a device essentially the same size as the fly's physiology.

This technology may be a boon for many people in the future, since 2 percent of Americans wear hearing aids, but perhaps 10 percent of the population could benefit from wearing one, Hall said.

"Many believe that the major reason for this gap is patient dissatisfaction, he added. "Turning up the gain to hear someone across from you also amplifies all of the surrounding background noise – resembling the sound of a cocktail party."

"The delicate mechanism must be protected from consumer handling with surrounding packaging," Hall said, "something the fly need not worry too much about."

The article, "Sound source localization inspired by the ears of the Ormia ochracea," is authored by Michael L. Kuntzman and Neal Hall. It will be published in the journal Applied Physics Letters on July 22, 2014. After that date, it can be accessed at: http://scitation.aip.org/content/aip/journal/apl/105/3/10.1063/1.4887370