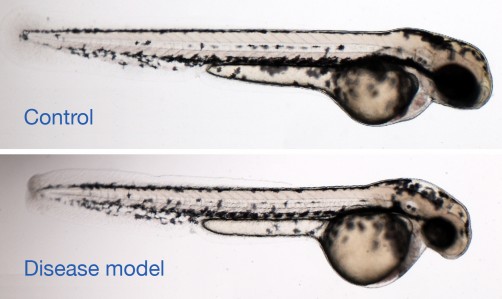 When the gene mutated in patients with a rare disorder is suppressed in zebrafish, the animals develop smaller heads, which is one of the major symptoms of the human disease. Image shows a control zebrafish larva (top) and one in which expression of rpl10 was suppressed (bottom), resulting in normal body length but a proportionately smaller head.

Newswise — Research in zebrafish has helped identify the cause of an unknown genetic disorder affecting a boy and two of his uncles, scientists report in an article published October 14 in the journal GENETICS.

The findings demonstrate the growing importance of zebrafish as laboratory models of rare diseases. Such models allow geneticists to make sense of the deluge of candidate disease genes being uncovered by advances in sequencing technologies. Although rare diseases are uncommon individually, together they affect as many as 25 million people in the United States.

The project began when a young boy with a puzzling constellation of symptoms was referred to medical geneticist Susan Brooks of the Rutgers Robert Wood Johnson Medical School. The child was suffering from delayed development, recurrent fevers, seizures, and slow growth. He also had poor head growth, resulting in microcephaly, or head size much smaller than healthy children his age. Two of the boy’s uncles shared many of these symptoms, suggesting that the mysterious disorder might be caused by a recessive mutation on the X-chromosome. Such "X-linked" mutations can be carried by both males and females, but with few exceptions, cause symptoms only in males.

Using this clue, the scientists tracked down a mutation carried only by the affected males and their mothers, within a gene called RPL10 located on the X-chromosome. This gene encodes part of the ribosome, which is a central piece of the molecular machinery that translates the genetic code into proteins.

But although they now had a candidate mutation, they couldn’t tell if it had actually caused the disorder or if it was merely one of the many harmless DNA variants that litter the genomes of every family.

For more common genetic diseases, scientists can confirm that a candidate mutation causes a disease by identifying other families with the same mutation and same symptoms. But this variant was unique. Although a few mutations in other parts of the RPL10 gene had been found previously, those who carried them did not show clinical signs similar to this family’s disorder. So, the team turned to the next best option for studying very rare variants — they tested the effect of the mutation in a model organism.

Brooks enlisted the help of a Duke University team led by Erica Davis from the Center for Human Disease Modeling, with most of the zebrafish experimental work performed by then-undergraduate Alissa Wall. They showed that dampening expression of the zebrafish rpl10 gene caused the animals to develop significantly smaller heads — in other words, they were displaying the fish version of microcephaly.

When they replaced the suppressed zebrafish gene with the human version, the fish heads developed to a normal size. But when the researchers tried the same trick using the mutated variant of the human RPL10 gene, it didn’t work. In other words, the change in DNA sequence prevented RPL10 from functioning properly. These findings strongly suggested that the mutation is also responsible for microcephaly in the males from the original family.

With assistance from Duke researchers in Christopher Nicchitta’s group, who specialize in the mechanics of protein translation, the team was even able to start investigating the specific effects of the mutation that might lead to smaller head size: when zebrafish rpl10 expression was suppressed, the animals showed reduced protein production and increased cell death within the brain.

The researchers emphasize that identifying the likely cause of the disorder does not mean they can now cure the boy and his uncles. Their finding provides only the crucial first step for further research into the molecular details of the disease, and ultimately, for developing treatments. However, Davis speculates that many other ribosomal protein genes will now be added to the list of candidates for other people with rare microcephaly syndromes who are searching for the molecular cause of their diseases.

“This was a one-of-a-kind family affected by a disorder that no one had ever seen before. But they are not alone,” said Davis. “Many others suffer from ultra-rare genetic diseases, and one of the best ways of finding answers for these families is for clinicians and model organism researchers to join forces.”

Zebrafish are particularly useful for this kind of study because they strike a balance between evolutionary relatedness to humans and the speed and cost of research. For example, around 70% of human protein-coding genes have an equivalent in zebrafish. That figure rises to 84% when you consider only those genes known to be associated with disease. But compared to laboratory mice and rats, zebrafish are considerably cheaper to maintain and faster to grow.

This research is published in the October issue of GENETICS and is accompanied by a Commentary on the power of model organism research for understanding rare disease pathogenesis authored by Phil Hieter (University of British Columbia) and Kym Boycott (University of Ottawa). The issue also features an editorial announcing the journal’s intention to expand its coverage of human gene identification and disease research.

This work was supported by funding from the Duke University Undergraduate Research Support Office, a National Alliance for Research on Schizophrenia and Depression (NARSAD) Young Investigator Grant from the Brain and Behavior Research Foundation, National Institutes of Health, and the Simons Foundation Autism Research Initiative.

Embargoed copies of the articles available at: http://bit.ly/1vZCYHy

Image caption: When the gene mutated in patients with a rare disorder is suppressed in zebrafish, the animals develop smaller heads, which is one of the major symptoms of the human disease. Image shows a control zebrafish larva (top) and one in which expression of rpl10 was suppressed (bottom), resulting in normal body length but a proportionately smaller head.

ABOUT GENETICSSince 1916, GENETICS (http://www.genetics.org/) has published high quality, original research on a range of topics bearing on inheritance, including population and evolutionary genetics, complex traits, developmental and behavioral genetics, cellular genetics, gene expression, genome integrity and transmission, and genome and systems biology. A peer-reviewed and peer-edited publication of the Genetics Society of America, GENETICS is one of the world’s most cited journals in genetics and heredity.