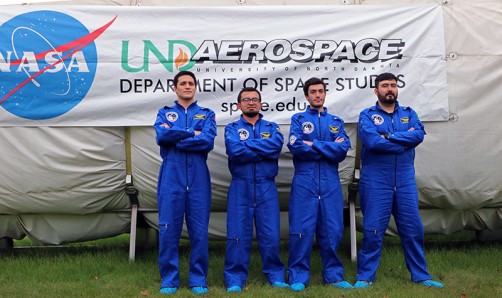 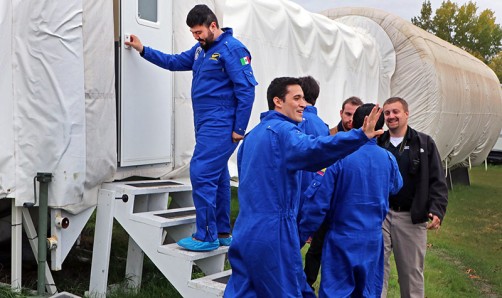 Leaving for a two-week mission during which they’ll be isolated in Inflatable Mars/Lunar Habitat, the four crew members say their goodbyes to the UND Space Studies staff who helped train them. 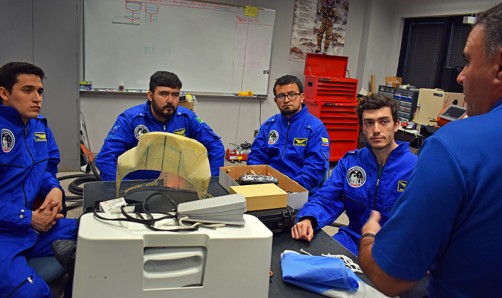 Newswise — The first international mission in the University of North Dakota’s Inflatable Mars/Lunar Habitat (IMLH) was launched Wednesday afternoon when four students from Argentina, Colombia, Mexico and Peru entered the facility to spend two weeks running experiments to help NASA with exploring the moon and Mars.

As he prepared to enter the habitat, mission commander Danton Bazaldua, an engineering student at the National Autonomous University of Mexico, said he was honored to be part of the project. He will be working with drones and remote sensing for research on Martian soil for his university’s space program and the Mexican Space Agency.

“We’ll be working with many experiments from this university and other organizations,” Bazaldua said. “It’s a great experience to actually do analog missions and really interesting research. It’s one of the greatest habitats that I’ve ever been in.”

The other three members of the international mission are:

Although development of the IMLH was funded through North Dakota NASA EPSCoR (Established Program to Stimulate Competitive Research), the international mission is funded by the Space Generation Advisory Council (SGAC), a global non-governmental, non-profit organization and network. It represents university students and young space professionals to the United Nations, space agencies, industry and academia. Additional funding came from the respective universities of the four crew members.

The habitat, just west of the UND campus, is roughly the size of the International Space Station—similar in volume to a 747 airliner. It has five modules, which include a core module for eating and sleeping, a plant production module, an exercise module, a geology and microbiology lab module and an extravehicular activities (EVA) module with a workshop.

Six years after the first IMLH mission was conducted, Pablo de León, director of UND’s Human Spaceflight Laboratory and a native of Argentina, said a mission with international participants is significant because it represents what space exploration should be about.

“I see space exploration as something that represents every person on this planet,” he said. “For me personally, it’s important because people from Latin America – for the first time – have the opportunity to participate in the habitat. Space exploration is something for all humanity—not just for one country. Of course, the United States plays a leadership role.”

According to de León, the eighth IMLH mission will be conducting tests and experiments similar to previous missions designed to assist NASA with long-duration exploration of the moon and Mars.

“This is the first attempt for us to offer our habitat to external institutions,” he said. “They can also learn and benefit from the platform we have here at UND and provide that to the space community in general. They will be running some of their experiments that were devised in their own institutions and also with some experiments we have set for them. They have a fairly busy schedule during these two weeks.”

The international mission is attracting attention from the Latin American media, de León said. A number of remote interviews have been scheduled while the four crew members are isolated in the IMLH, including one with Telemundo, a worldwide Hispanic TV network.

Later this month, de León will be in Washington, D.C., for the International Astronautical Congress. He will meet with the SGAC directors to discuss more opportunities for people from other countries to come to UND to perform analog planetary missions using the university’s infrastructure.

To schedule a remote interview with the IMLH crew while they are in isolation over the next two weeks, please contact Pablo de León, Director, UND Human Spaceflight Laboratory, Department of Space Studies at the John D. Odegard School of Aerospace Sciences at (701) 777-2369 or [email protected].