From Bovines to the Battlefield: New Bone Regeneration Technology Has Wide-Ranging Benefits 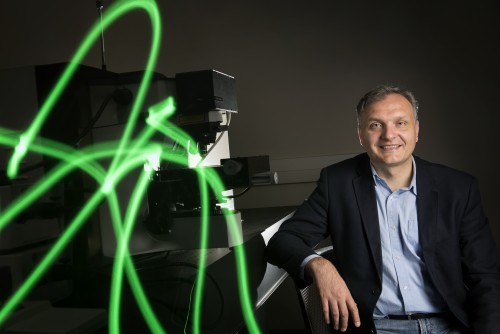 A nanomaterial-based bone regeneration technology developed at the University of Arkansas at Little Rock helped save a valuable animal’s life. In the future, this technology could help people suffering from a variety of severe injuries and ailments. Dr. Alexandru Biris, director of the UA Little Rock Center for Integrative Nanotechnology Sciences, led the development of this technology, the NuCress scaffold, a temporary, implantable filler for missing bone that encourages healthy bone regeneration and is absorbed into the body.

In addition to its unique 3-D structure, the device can be loaded with beneficial drugs, such as antibiotics to fight infection or hormones and stem cells to encourage healing.

Biris began developing the device in 2005, initially intending it for regeneration of small sections of bone, such as in the human jaw. He believes the NuCress scaffold will, one day, be an invaluable tool for repairing the kind of irregular, complicated bone gaps often seen in victims of severe trauma from wartime violence, car crashes, and bone disease. For now, the scaffold is making a name for itself in America’s heartland. More than a decade ago, Biris started collaborating with Dr. David Anderson, a veterinarian, and the pair have been refining and developing the device ever since.

Anderson has conducted biomaterials and bone trauma research since 1991 through his work at Kansas State and Ohio State universities. Since 2012, he has been a professor and the head of Large Animal Clinical Sciences at the University of Tennessee College of Veterinary Medicine. Anderson is an internationally renowned expert in veterinary orthopedic surgery, having given keynote addresses in more than a dozen countries and published extensively on the subject. Anderson’s position and reputation mean he is occasionally called on to take his skills from the classroom to the community.

“Veterinary teaching hospitals exist for two main purposes. One is to educate vet students, and the other is to serve the community with advanced expertise in technologies,” Anderson said. “If the primary veterinarian is not able to fix the problem, they can send it to the tertiary care center at the veterinary teaching hospital, where the equipment and expertise is available to be able to deal with these types of complex problems.” This is exactly what happened in 2010, when he was contacted by a local veterinarian whose patient, a young bull in Kansas, had a serious leg injury likely caused by a misplaced step in a hole. While Anderson and his team were no strangers to complicated animal injuries, this case was unique. “It was an open fracture that was very badly contaminated with hair, dirt, manure, and debris. The bone was severely damaged,” Anderson said.

Not only was the injury severe, but the stakes were high — the animal was no ordinary bovine.

“The bull was an Angus breeding bull selected to add genetic advancement for that herd. This was probably about a $20,000 bull. It would have been a total loss for the owner if the bull was put down.” Initially, Anderson and his team put in an external skeletal fixation system to stabilize the bone, hoping this would be sufficient to heal the bull.

The bull, however, was not responding. The complexity and contamination of the wound resulted in a bone break that simply wouldn’t heal. Infection had set in, conventional methods had been exhausted, and the prize bull was running out of options.

“We either had to do something dramatic or we would have to euthanize the animal,” Anderson said. Not ready to give up, Anderson turned to his research with Biris.

In previous studies, the pair had already shown that their scaffold was effective for delivery of antibiotics. Though this scaffold was smaller in size than what the bull would require, Anderson decided to take a chance.

“I called Alex … and I asked if he could make one for this bull to see if we could try to control the infection and stimulate the bone to heal more quickly,” Anderson said. Biris immediately went to work, scaling up the scaffold by almost six times the original prototype’s size.

The scaffold was loaded with antibiotics and implanted by Anderson’s team inside the bull’s fractured leg. Then they waited, keeping their expectations low.

“When the infection has progressed to that extent, it is actually fairly uncommon to be able to reverse it, and most of these animals with such infections end up being euthanized because they are simply too big to survive with an amputated limb,” Anderson explained. But the bull — and the scaffold — defied expectations. Not only did the bone heal, but the infection was stopped in its tracks and completely reversed.

These results, Anderson asserts, were astounding.

The bull returned to full function in his herd in a relatively short amount of time at a fraction of the cost to the rancher that replacement would have involved. While this experience was not the first evidence of the scaffold’s usefulness, it reinforced its potential value.

“There is no question that this is a product that has real merit,” Anderson said. “It can change the way we do therapy and can really improve outcomes for patients.” Today, UA Little Rock has patented the scaffold technology, and Biris and his team received about $6 million from the U.S. Department of Defense to develop it further. The researchers hope to bring the NuCress scaffold to clinical trial in the next few years, but they’ll always remember their first successful patient — a prize bull from a ranch in the heartland.