Future Warming Likely to Be on High Side of Climate Projections, Analysis Finds 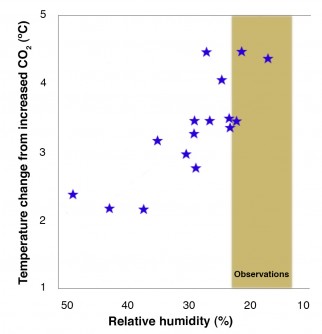 Illustration adapted from Fig. 4 of Fasullo and Trenberth, courtesy AAAS.

Computer models that more accurately depict dry conditions in a key part of the subtropical atmosphere are also more likely to predict greater climate warming from increased greenhouse gases. Each star indicates one of 16 leading global climate models. The left axis ("warming") corresponds to equilibrium climate sensitivity (ECS) in degrees C, which is the amount of warming produced by each model when carbon dioxide concentrations in the atmosphere are doubled over preindustrial values. The bottom axis shows May-to-August relative humidity for a portion of the upper atmosphere between about 20,000 to 30,000 feet in height and between about 10° and 25° latitude S in the southern subtropics.

Newswise — BOULDER—Climate model projections showing a greater rise in global temperature are likely to prove more accurate than those showing a lesser rise, according to a new analysis by scientists at the National Center for Atmospheric Research (NCAR). The findings, published in this week’s issue of Science, could provide a breakthrough in the longstanding quest to narrow the range of global warming expected in coming decades and beyond.

NCAR scientists John Fasullo and Kevin Trenberth, who co-authored the study, reached their conclusions by analyzing how well sophisticated climate models reproduce observed relative humidity in the tropics and subtropics.

The climate models that most accurately captured these complex moisture processes and associated clouds, which have a major influence on global climate, were also the ones that showed the greatest amounts of warming as society emits more greenhouse gas into the atmosphere.

“There is a striking relationship between how well climate models simulate relative humidity in key areas and how much warming they show in response to increasing carbon dioxide,” Fasullo says. “Given how fundamental these processes are to clouds and the overall global climate, our findings indicate that warming is likely to be on the high side of current projections.”

The research was funded by NASA.

The world’s major global climate models, numbering more than two dozen, are all based on long-established physical laws known to guide the atmosphere. However, because these relationships are challenging to translate into software, each model differs slightly in its portrayal of global climate. In particular, some processes, such as those associated with clouds, are too small to be represented properly.

The most common benchmark for comparing model projections is equilibrium climate sensitivity (ECS), or the amount of warming that eventually occurs in a model when carbon dioxide is doubled over preindustrial values. At current rates of global emission, that doubling will occur well before 2100.

For more than 30 years, ECS in the leading models has averaged around 5 degrees Fahrenheit (3 degrees Celsius). This provides the best estimate of global temperature increase expected by the late 21st century compared to late 19th century values, assuming that society continues to emit significant amounts of carbon dioxide. However, the ECS within individual models is as low as 3 degrees F and as high as 8 degrees F, leaving a wide range of uncertainty that has proven difficult to narrow over the past three decades.

The difference is important to reconcile, as a higher temperature rise would produce greater impacts on society in terms of sea level rise, heat waves, droughts, and other threats.

Clouds are one of the main sticking points, say the NCAR authors. Although satellites observe many types of clouds, satellite failure, observing errors, and other inconsistencies make it challenging to build a comprehensive global cloud census that is consistent over many years.

However, satellites perform better in measuring water vapor, and estimates of the global distribution of relative humidity have become more reliable. Relative humidity is also incorporated in climate models to generate and dissipate clouds.

Fasullo and Trenberth checked the distribution of relative humidity in 16 leading climate models to see how accurately they portray the present climate. In particular, they focused on the subtropics, where sinking air from the tropics produce very dry zones where most of the world's major deserts are located.

The seasonal drying in the subtropics and the associated decrease in clouds, especially during May through August, serve as a good analog for patterns projected by climate models.

“The dry subtropics are a critical element in our future climate,” Fasullo says. “If we can better represent these regions in models, we can improve our predictions and provide society with a better sense of the impacts to expect in a warming world.”

Estimates based on observations show that the relative humidity in the dry zones averages between about 15 and 25 percent, whereas many of the models depicted humidities of 30 percent or higher for the same period. The models that better capture the actual dryness were among those with the highest ECS, projecting a global temperature rise for doubled carbon dioxide of more than 7 degrees F. The three models with the lowest ECS were also the least accurate in depicting relative humidity in these zones.

“Because we have more reliable observations for humidity than for clouds, we can use the humidity patterns that change seasonally to evaluate climate models,” says Trenberth. “When examining the impact of future increases in heat-trapping gases, we find that the simulations with the best fidelity come from models that produce more warming.”

The authors focused on climate models used for the 2007–08 assessment by the Intergovernmental Panel on Climate Change. The next-generation models being used for the upcoming 2013–14 IPCC assessment were found to behave in a similar fashion, as described in a preliminary analysis by the authors in a supplement to their paper.

“In addition to providing a path forward and focus for improving models, results strongly suggest that the more sensitive models perform better, and indeed the less sensitive models are not adequate in replicating vital aspects of today’s climate,” write the authors in the paper.

Journalists who agree to abide by the embargo may request advance copies of the article by contacting the Office of Public Programs at the American Association for the Advancement of Science at 202-326-6440 or scipak@aaas.org.