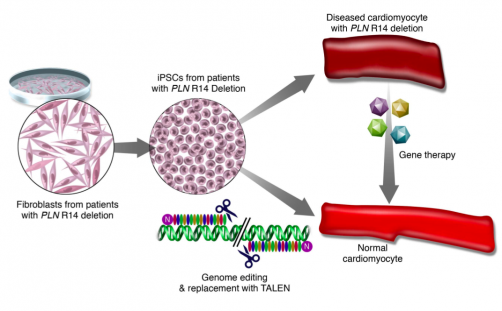 New study reveals how gene therapy works to edit out heart failure gene mutations and replace them with normal genes.

Newswise — Gene therapy can clip out genetic material linked to heart failure and replace it with the normal gene in human cardiac cells, according to a study led by researchers from the Cardiovascular Research Center at Icahn School of Medicine at Mount Sinai. The study is published in the April 29 edition of Nature Communications.

“Genetic mutations, the small random, changes in the genetic code making up genes, are major culprits in the weakening heart muscle seen in patients with heart failure,” says Roger J. Hajjar, MD, Director of the Cardiovascular Research Center of Mount Sinai Heart at Icahn School of Medicine at Mount Sinai. “Our study results reveal that specific forms of heart failure can now be targeted by a new kind of gene therapy that acts as ‘molecular scissors’ cutting out the mutation and inserting the normal genetic code in its place.”

Cardiomyopathies are diseases of weakened heart muscle, which can lead to heart enlargement and heart failure. The conditions are often genetically inherited. A number of inherited gene mutations have been associated with cardiomyopathies, including mutations in the phospholamban (PLN) gene, which is a critical regulator of healthy cardiac cell function and its calcium cycling. Calcium is a critical mineral for heart muscle cells to properly contract and pump blood from the heart to the rest of the body.

The R14del mutation within the PLN gene has been identified in a number of families with genetic heart failure. The mutation is linked to dilated heart muscle, dysfunctional heart muscle contraction, dangerous arrhythmias, and the development of heart failure by middle age.

In the study, the research team collected skin cell samples from a heart failure patient who has the R14del mutation. The skin cells from the patient were then transformed in the laboratory to become induced pluripotent stem cells (iPSCs). These stem cells, which carry the genetics of the heart failure patient, were then differentiated from the skin cells into specialized heart muscle cells called cardiomyocytes (iPSC-CMs), which also carry the patient’s genetic history.

Examination of these beating cardiac cells in a laboratory dish confirmed R14del mutation causes common abnormalities linked to heart failure including: improper pumping of calcium within cell compartments which can lead to enlargement of heart muscle tissue, electrical instability which can cause arrhythmias, and molecular markers which can lead to thickening of the heart muscle.

To correct the gene mutation in cardiomyocytes researchers successfully used two novel methods. First, they used a specifically designed transcription activator-like effector nucleases called TALENs to target and eliminate the presence of R14del-associated disease in cardiac cells. This genome engineering technique cut out the diseased gene and replaced it with a normal PLN gene resulting in normally functioning cardiomyocytes.

“Our findings offer potentially new strategies to target and interrupt the disease causing path of the mutation associated with cardiomyopathies and heart failure,” says Dr. Hajjar. “Having now corrected this heart failure gene abnormality in human cardiac cells, our research will move forward to further test this approach in vivo in animal and pre-clinical studies. We look forward to eventually testing this gene therapy approach one day to correct the gene abnormality in heart failure patients.”

“This is a major breakthrough in molecular medicine and paves the way for future studies in personalized therapy for heart failure patients aiming to specifically correct their defective genes,” says study co-author Litsa Kranias, PhD, of the University of Cincinnati, who first discovered the PLN gene R14del mutation in a Greek family.

“This finding has a huge impact for patients with inherited cardiac disease in the Netherlands as around 10 percent of our patients with dilated or arrhythmogenic cardiomyopathy carry this particular founder mutation,” says Folkert W. Asselbergs, MD, PhD, FESC, Department of Cardiology, Division Heart & Lungs University Medical Center in Utrecht, Netherlands who provided cardiac cell samples of PLN R14del patients for the research team. The Netherlands population has a high prevalence of this mutation.

Dr. Hajjar is the scientific cofounder of the company Celladon, which is developing gene therapy for the treatment of heart failure. He holds equity in Celladon and receives financial compensation as a member of its advisory board. About the Mount Sinai Health SystemThe Mount Sinai Health System is an integrated health system committed to providing distinguished care, conducting transformative research, and advancing biomedical education. Structured around seven hospital campuses and a single medical school, the Health System has an extensive ambulatory network and a range of inpatient and outpatient services—from community-based facilities to tertiary and quaternary care.

The System includes approximately 6,600 primary and specialty care physicians, 12-minority-owned free-standing ambulatory surgery centers, over 45 ambulatory practices throughout the five boroughs of New York City, Westchester, and Long Island, as well as 31 affiliated community health centers. Physicians are affiliated with the Icahn School of Medicine at Mount Sinai, which is ranked among the top 20 medical schools both in National Institutes of Health funding and by U.S. News & World Report.