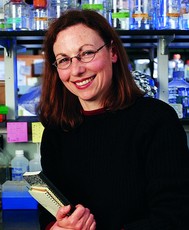 Newswise — For some time, scientists have been tracking down the sequence of biochemical steps required to attract and assemble at the head end of a gene the molecular machinery needed to transcribe that gene to put to work the information it encodes. Now, a new study led by researchers at The Wistar Institute suggests that the gene-transcription machinery, once in place, can remain poised for action but held in check until a triggering signal sends it on its way down the linear DNA molecule.

The data outline a mechanism by which sets of critical genes could be prepared for nearly instantaneous activation in response to stress or other vital needs. Embryonic stem cells, for example, are known to have numbers of genes held in this state of readiness.

In their investigations, the scientists were able to identify a single molecule called ubiquitin that, when in place, appears to be able to pause the transcription process after the needed machinery has been assembled. Once that molecule is removed, the machinery " with a molecule known as RNA polymerase II at its core " is released and transcription is set into motion. The research was done in yeast, an often-used model organism for genetic studies. A report on the findings appears in the current issue of Molecular Cell.

"In our experiments, we saw polymerase loaded onto the gene, but not correctly activated," says Shelley L. Berger, Ph.D., the Hilary Koprowski Professor at The Wistar Institute and senior author on the study. "At the appropriate time, ubiquitin is removed, and this triggers polymerase action. Data from other laboratories indicate that stem cells have many genes that may be poised in this way, ready to send the cells down various differentiation pathways to form different tissues. There are likely many vital cell functions that depend on a quick response which could be regulated by this process."

In earlier work, Berger and her coworkers looked at ways in which the addition and removal of a small protein called ubiquitin modified particular histones to regulate gene expression. Histones are molecular structures around which DNA is tightly spooled as part of the cell's scheme for maintaining order in the genome and securely storing away genes until needed. Eight histones comprise a nucleosome, and long strings of nucleosomes coil in turn into chromatin, the basic material of chromosomes. Specific modifications to histones have been associated with either gene repression or activation. A key finding in the earlier study was that both the addition and removal of ubiquitin at different times was required to optimal transcription.

In the current study, experimental techniques were used to block the removal of ubiquitin in order to illuminate the importance of the removal step and detail the resulting effects.

"When ubiquitin cannot be removed from the histone, the first thing seen is that a particular enzyme normally recruited into the process at the start of productive gene expression could not get in," says Anastasia Wyce, lead author on the Molecular Cell study. "The machinery incorporating polymerase is assembled at the beginning of the gene, but is not properly activated. Ubiquitin seems to serve as something like a checkpoint until it is removed, at which point polymerase is fully functional."

The research was supported by the National Institutes of Health, the National Science Foundation, and the Commonwealth Universal Research Enhancement Program of the Pennsylvania Department of Health. Co-author Strahl is a Pew Scholar in the Biomedical Sciences.

The Wistar Institute is an international leader in biomedical research, with special expertise in cancer research and vaccine development. Founded in 1892 as the first independent nonprofit biomedical research institute in the country, Wistar has long held the prestigious Cancer Center designation from the National Cancer Institute. Discoveries at Wistar have led to the creation of the rubella vaccine that eradicated the disease in the U.S., rabies vaccines used worldwide, and a new rotavirus vaccine approved in 2006. Wistar scientists have also identified many cancer genes and developed monoclonal antibodies and other important research tools. Today, Wistar is home to eminent melanoma researchers and pioneering scientists working on experimental vaccines against influenza, HIV, and other diseases threatening global health. The Institute works actively to transfer its inventions to the commercial sector to ensure that research advances move from the laboratory to the clinic as quickly as possible. The Wistar Institute: Today's Discoveries " Tomorrow's Cures. On the web at http://www.wistar.org.