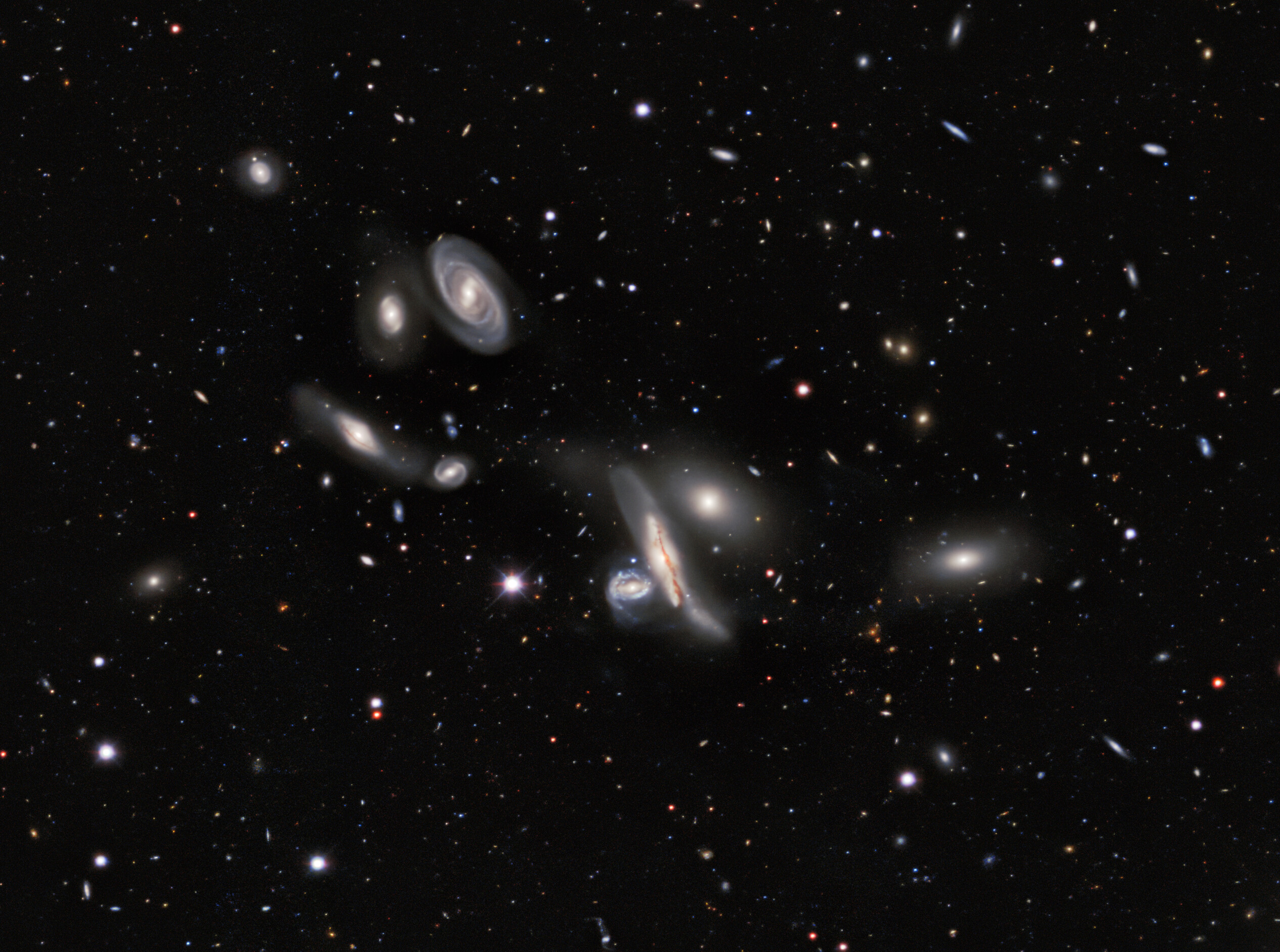 Copeland Septet group of galaxies. A group of galaxies nicknamed the Copeland Septet, in the constellation of Leo. Astronomers using images from Kitt Peak National Observatory and Cerro Tololo Inter-American Observatory have created the largest ever map of the sky, comprising over a billion galaxies. The final data release from the ambitious DESI Legacy Imaging Surveys sets the stage for a ground-breaking 5-year survey with the Dark Energy Spectroscopic Instrument (DESI), which aims to provide new insights into the nature of dark energy.

Newswise — For millennia humans have used maps to understand and navigate our world and put ourselves in context: we rely on maps to show us where we are, where we came from, and where we’re going. Astronomical maps continue this tradition on a vast scale. They locate us within the cosmos and tell the story of the history and fate of the Universe: it will expand forever, the expansion currently accelerating because of an unknown quantity called dark energy. Astronomical maps may help explain what this dark energy is and why it exists.

Capitalizing on that possibility requires an unprecedented map — one that charts faint galaxies more uniformly and over a larger area of sky than ever before. To meet that challenge, astronomers have now created a new two-dimensional map of the sky that is the largest ever made in terms of sky coverage, sensitivity, and the total number of galaxies mapped.

From among the more than 1 billion galaxies in the map, astronomers will select tens of millions of galaxies for further study with the Dark Energy Spectroscopic Instrument (DESI), in order to construct the largest 3D map ever attempted. The results from the DESI survey, which will be carried out at Kitt Peak National Observatory (KPNO), a Program of National Science Foundation’s NOIRLab, will ultimately provide new insights into the nature of dark energy.

The new map is the result of the DESI Legacy Imaging Surveys, an ambitious 6-year effort involving 1405 observing nights at three telescopes, years of data from a space telescope, 150 observers and 50 other researchers from around the world, 1 petabyte of data (1000 trillion bytes), and 100 million CPU hours on one of the world’s most powerful computers. The images were taken at KPNO and Cerro Tololo Inter-American Observatory (CTIO), also a Program of NOIRLab, and supplemented by images from NASA’s Wide-field Infrared Survey Explorer (WISE) mission. The data were reduced at Berkeley Lab’s National Energy Research Scientific Computing Center (NERSC).

The map covers half of the sky, digitally sprawling over 10 trillion pixels, which is equivalent to a mosaic of 833,000 high-resolution smartphone photos, and is one of the most uniform, deep surveys of the sky ever undertaken. “This is the biggest map by almost any measure,” said David Schlegel, co-project scientist for DESI who also co-led the imaging project. Schlegel is an astrophysicist at the Department of Energy’s Lawrence Berkeley National Laboratory (Berkeley Lab), the lead institution for the international DESI collaboration.

Arjun Dey, the DESI Project Scientist for NOIRLab, co-led two of the three imaging surveys, serving as the lead scientist for the Mayall z-band Legacy Survey (MzLS) observed by the Mosaic3 camera on the Nicholas U. Mayall 4-meter Telescope at KPNO, and as co-lead scientist with Schlegel for the Dark Energy Camera Legacy Survey (DECaLS) on DECam on the Víctor M. Blanco 4-meter Telescope at CTIO in Chile.

The third survey is the Beijing-Arizona Sky Survey (BASS) observed by the 90Prime camera on the Bok 2.3-meter Telescope, which is owned and operated by the University of Arizona and located at KPNO.

The collective effort of the three surveys, Dey said, “was one of the most uniform, deep surveys of the sky that has ever been undertaken. It was really exciting to participate.”

The DESI collaboration will select 35 million galaxies and 2.4 million quasars in the map — some as far away as 12 billion light-years — as targets for the DESI survey. Over five years of operations, DESI will create a giant 3D map of the Universe by measuring the galaxies’ distances and the rate at which they are moving away from us. To make these measurements, DESI will take the fingerprint of a galaxy by measuring its spectrum: the light from individual galaxies will be dispersed into fine bands of color.

Capturing the spectra of so many galaxies so quickly requires a high degree of automation. DESI — equipped with an array of 5000 swiveling, automated robots, each toting a thin fiber-optic cable that can point at individual galaxies — is designed to measure the spectra of 5000 galaxies at a time. The results will ultimately provide new insights into the mysterious dark energy that is driving the Universe’s accelerating expansion.

The quest to understand the nature of dark energy has led to major opportunities for discovery in other areas of astronomy. Adam Bolton, Director of NOIRLab’s Community Science and Data Center, explained: “To solve some of the biggest mysteries in fundamental physics today, we are driven to create huge digital databases of stars and galaxies, which in turn enable a new data-mining approach to making additional astronomical discoveries.”

With the completion of the DESI Legacy Imaging Surveys, all data have been released to the scientific community and the public. This final data release, known as Data Release 9, has been preceded by eight other intermediate data releases.

NOIRLab will host these data products in the Astro Data Archive, from the original images taken at the telescopes to the catalogs that report the positions and other properties of stars and galaxies. Astro Data Lab also serves the catalogs as databases, which astronomers can easily analyze using the Astro Data Lab tools and services, and cross-match them with other datasets, giving more opportunities for discovery. In addition, Astro Data Lab provides astronomers with example scientific applications and tutorials to assist with their research. The DESI Legacy Imaging Surveys data have already been used for many other research projects [1] [2], including citizen science efforts that utilize the wisdom of crowds [3].

[1] One study uses a machine-learning algorithm to automatically identify light-bending phenomena known as gravitational lenses in the DESI surveys data.

[2] Another study employs spectroscopy from the Sloan Digital Sky Survey together with the Legacy Surveys imaging to reveal the presence of active black holes in galaxies, and giving us a preview of a large population of active galaxies to be discovered with the DESI spectroscopic survey. This work is being led by NOIRLab astronomer Stephanie Juneau.

[3] The citizen science project Backyard Worlds: Planet 9 enlists the general public’s help in finding a possible ninth planet in our Solar System, by searching for moving objects in the data. Participants have already discovered new cool worlds in the vicinity of the Sun — objects more massive than planets but lighter than stars, known as brown dwarfs. Several of these are among the very coolest brown dwarfs known, with a few approaching the temperature of Earth and cool enough to harbor water clouds. Recently the largest map of brown dwarfs in our neighborhood was published. Backyard Worlds is co-led by Aaron Meisner, a NOIRLab astronomer and DESI participant.

DESI is supported by the US Department of Energy’s Office of High Energy Physics; the US National Science Foundation, Division of Astronomical Sciences under contract to the NSF’s NOIRLab; the Science and Technologies Facilities Council of the United Kingdom; the Gordon and Betty Moore Foundation; the Heising-Simons Foundation; the French Alternative Energies and Atomic Energy Commission (CEA); the National Council of Science and Technology of Mexico; the Ministry of Economy of Spain; and DESI member institutions. The DESI scientists are honored to be permitted to conduct astronomical research on Iolkam Du’ag (Kitt Peak), a mountain with particular significance to the Tohono O'odham Nation.

Lawrence Berkeley National Laboratory addresses the world’s most urgent scientific challenges by advancing sustainable energy, protecting human health, creating new materials, and revealing the origin and fate of the Universe. Founded in 1931, Berkeley Lab’s scientific expertise has been recognized with 13 Nobel prizes. The University of California manages Berkeley Lab for the U.S. Department of Energy’s Office of Science.

DOE’s Office of Science is the single largest supporter of basic research in the physical sciences in the United States, and is working to address some of the most pressing challenges of our time.

Established in 2007 by Mark Heising and Elizabeth Simons, the Heising-Simons Foundation is dedicated to advancing sustainable solutions in the environment, supporting groundbreaking research in science, and enhancing the education of children.

The Gordon and Betty Moore Foundation, established in 2000, seeks to advance environmental conservation, patient care and scientific research. The Foundation’s Science Program aims to make a significant impact on the development of provocative, transformative scientific research, and increase knowledge in emerging fields.

The Science and Technology Facilities Council (STFC) of the United Kingdom coordinates research on some of the most significant challenges facing society, such as future energy needs, monitoring and understanding climate change, and global security. It offers grants and support in particle physics, astronomy, and nuclear physics.