1-May-2020 2:35 PM EDT, by University of Alabama Huntsville
favorite_border

Seasonally-adjusted temperatures dropped a bit in the tropics and northern hemisphere from March values leading to a global temperature departure from average of +0.38 °C (+0.68 °F). As indicated last month we suggested that the drop is due in part to the cooling of the central Pacific Ocean. Recall that in the latter months of 2019, a weak, warm El Niñolike event occurred which aided in warming up the atmosphere for a few months but that impact is mostly exhausted now. The two-month drop in the Northern Hemisphere temperature of -0.53 °C is rare – exceeded only once in the 497-month history when the hemisphere cooled between the 1987 warm El Niño and the cold 1989 La Niña. The NH temperature dropped -0.69 °C between December 1987 and February 1988.

The region with the warmest departure from average was a large hot spot in central Russia in the Krasnoyarsk Krai region. The peak occurred near Vorogovo at a remarkable +6.4 °C (+11.4 °F) above average. As is usual, when it’s very warm in one place, there are usually a series of alternating cold and warm regions in the same latitude belt, reflecting a somewhat stationary pattern. This month the pattern indicates three warm peaks (Central Russia, Gulf of Alaska and Europe) with three cool areas in between (Sea of Japan, Canada and western Russia.) Moving eastward from the peak in central Russia to the cool area in central Canada we find the coldest departure from average near the Prince Albert National Park in Saskatchewan with a -3.3 °C (-6.0 °F) anomaly.

Besides the locations mentioned above, warmer than average conditions prevailed in the Caribbean Sea, Eastern Antarctica and western Australia. Cooler than average temperatures were found in the southern oceans.

The remarkable warmth of the lower stratosphere that was linked to the aerosols from the Australian fires last year is apparently fading. The global departure from average for this layer was +0.00 °C in April, down from +0.32 °C last month. Even so, April’s temperature was the warmest since the volcanically-induced warming in 1993 after the eruption of Mt. Pinatubo in 1991. 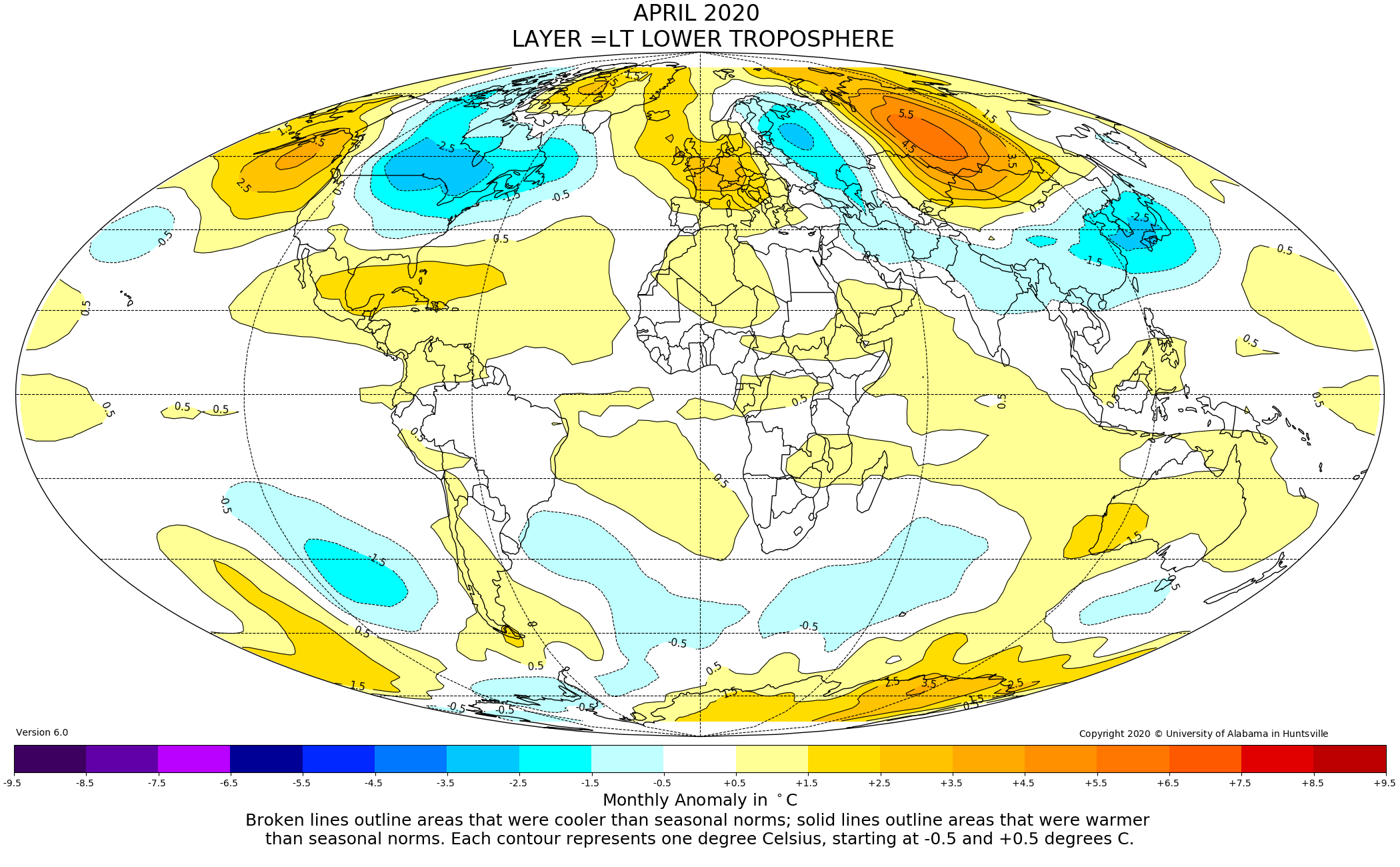