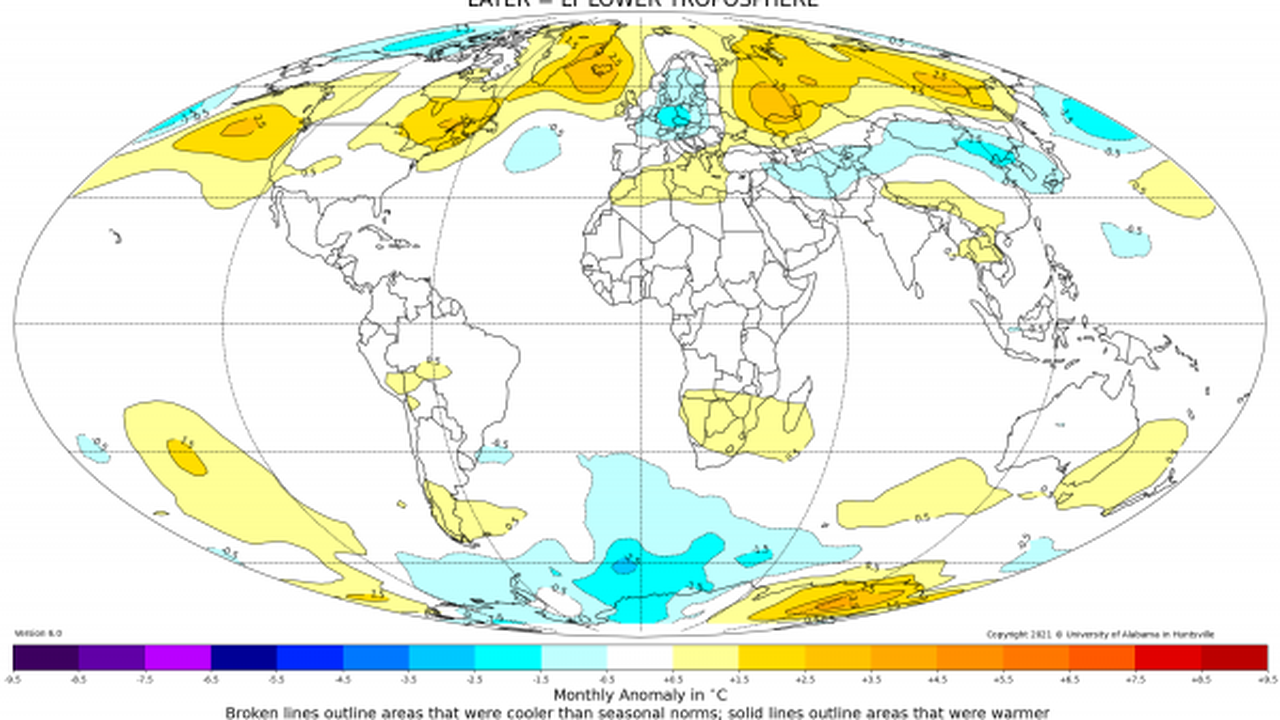 The modest warming that occurred in May was counter-balanced this month by a cooling in the tropics and Southern Hemisphere which produced a global average that was virtually zero (-0.01 C).  Atmospheric temperatures bounce around from month to month relative to the slower changes created by the El Niño/La Niña cycle of the tropical Pacific Ocean temperatures, so such variations are normal.  The warming that typically occurs after a La Niña may have run its course as several forecasts are calling for a return to another La Niña (cool) event for the coming Boreal winter.  There have been other back-to-back La Niñas, most recently 2010-11 followed by 2011-12 and even three in a row starting with 1998-99.  So, it is possible that the global temperature may be weakly below average for another year. To keep track of the latest weekly summary of the El Niño/La Niña cycle see:

The warmest region, in terms of the monthly departure from average, was in association with the record heat in the US’s Pacific NW.  The hottest grid cell was near Hamilton Montana at +4.3 °C (+7.7 °F).  This warmth was part of an almost global band of above average temperatures in the mid-latitudes of the northern hemisphere and included peaks in Scandinavia/Western Russia and over the Caspian Sea.  Northeastern Russia and a few areas in the Southern Hemisphere were also warm.

The coldest grid cell occurred in the far southeastern portion of the Pacific Ocean at -3.4 °C (-6.1 °F).  Several colder than average regions were found in and off shore of Antarctica.  The Southern Hemispheric coolness was also aided by a band of cool temperatures between 40° and 60° south latitude.

The 100+ year record heat at the surface in the Pacific NW (and warmth in general in the Western US) was supported by heat in the deeper atmosphere and pushed the conterminous US temperature departure to +1.44 C (2.59 °F), the warmest June of the last 43 as monitored by this satellite system.  The previous high that was driven by heat in the center part of the nation was 1.15 C (+2.07 °F) in 1988.  This pattern of greater warmth in the West than in the East has been somewhat persistent since April.  Adding in Alaska’s temperature doesn’t change the June value too much with the 49-state average coming in at +1.28 °C (+2.30 °F).  [We don’t include Hawaii in the US results because its land area is less than that of a satellite grid square, so it would have virtually no impact on the overall national results.]

New Reference Base Jan 2021.  As noted in the Jan 2021 GTR, the situation comes around every 10 years when the reference period or “30-year normal” that we use to calculate the departures is redefined.  With that, we have averaged the absolute temperatures over the period 1991-2020, in accordance with the World Meteorological Organization’s guidelines, and use this as the new base period.  This allows the anomalies to relate more closely to the experience of the average person, i.e. the climate of the last 30 years.  Due to the rising trend of global and regional temperatures, the new normals are a little warmer than before, i.e. the global average temperature for Januaries for 1991-2020 is 0.14 °C warmer than the average for Januaries during 1981-2010.  So, the new departures from this now warmer average will appear to be cooler, but this is an artifact of simply applying a new base period.  It is important to remember that changes over time periods, such as a trend value or the relative difference of one year to the next, will not change.  Think about it this way, all we’ve done is to take the entire time series and shifted it down a little.

To-Do List: There has been a delay in our ability to utilize and merge the new generation of microwave sensors (ATMS) on the NPP and JPSS satellites.  As of now, the calibration equations applied by the agency have changed at least twice, so that the data stream contains inhomogeneities which obviously impact the type of measurements we seek.  We are hoping this is resolved soon with a dataset that is built with a single, consistent set of calibration equations.   In addition, the current non-drifting satellite operated by the Europeans, MetOP-B, has not yet been adjusted or “neutralized” for its seasonal peculiarities related to its unique equatorial crossing time (0930).  While these MetOP-B peculiarities do not affect the long-term global trend, they do introduce error within a particular year in specific locations over land.

As part of an ongoing joint project between UAH, NOAA and NASA, Christy and Dr. Roy Spencer, an ESSC principal scientist, use data gathered by advanced microwave sounding units on NOAA, NASA and European satellites to produce temperature readings for almost all regions of the Earth. This includes remote desert, ocean and rain forest areas where reliable climate data are not otherwise available.  Drs. Danny Braswell and Rob Junod assist in the preparation of these reports.