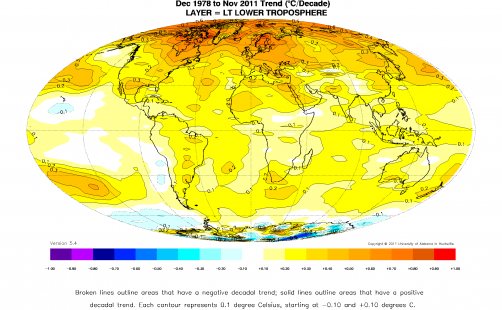 The end of November 2011 completes 33 years of satellite-based global temperature data, according to John Christy, a professor of atmospheric science and director of the Earth System Science Center (ESSC) at The University of Alabama in Huntsville. Globally averaged, Earth’s atmosphere has warmed about 0.45 Celsius (about 0.82° F) during the almost one-third of a century that sensors aboard NOAA and NASA satellites have measured the temperature of oxygen molecules in the air.

This is at the lower end of computer model projections of how much the atmosphere should have warmed due to the effects of extra greenhouse gases since the first Microwave Sounding Unit (MSU) went into service in Earth orbit in late November 1978, according to satellite data processed and archived at UAHuntsville’s ESSC.

“While 0.45 degrees C of warming is noticeable in climate terms, it isn’t obvious that it represents an impending disaster,” said Christy. “The climate models produce some aspects of the weather reasonably well, but they have yet to demonstrate an ability to confidently predict climate change in upper air temperatures.”

The atmosphere has warmed over most of the Earth’s surface during the satellite era. Only portions of the Antarctic, two areas off the southwestern coast of South America, and a small region south of Hawaii have cooled. On average, the South Pole region has cooled by about 0.05 C per decade, or 0.16 C (0.30° F) in 33 years. The globe’s fastest cooling region is in the central Antarctic south of MacKenzie Bay and the Amery Ice Shelf. Temperatures in that region have cooled by an annual average of about 2.36 C (4.25° F).

The greatest warming has been in the Arctic. Temperatures in the atmosphere above the Arctic Ocean warmed by an average of 1.75 C (3.15° F) in 33 years. The fastest warming spot is in the Davis Strait, between the easternmost point on Baffin Island and Greenland. Temperatures there have warmed 2.89 C (about 5.2° F).

While Earth’s climate has warmed in the last 33 years, the climb has been irregular. There was little or no warming for the first 19 years of satellite data. Clear net warming did not occur until the El Niño Pacific Ocean “warming event of the century” in late 1997. Since that upward jump, there has been little or no additional warming.

“Part of the upward trend is due to low temperatures early in the satellite record caused by a pair of major volcanic eruptions,” Christy said. “Because those eruptions pull temperatures down in the first part of the record, they tilt the trend upward later in the record.”

Christy and other UAHuntsville scientists have calculated the cooling effect caused by the eruptions of Mexico’s El Chichon volcano in 1982 and the Mt. Pinatubo volcano in the Philippines in 1991. When that cooling is subtracted, the long-term warming effect is reduced to 0.09 C (0.16° F) per decade, well below computer model estimates of how much global warming should have occurred.

Although volcanoes are a natural force, eruptions powerful enough to affect global climate are rare and their timing is random. Since that timing has a significant impact on the long-term climate trend (almost as much as the cooling itself), it makes sense to take their chaotic effect out of the calculations so the underlying climate trend can be more reliably estimated.

What it doesn’t do is tell scientists how much of the remaining warming is due to natural climate cycles (not including volcanoes) versus humanity’s carbon dioxide emissions enhancing Earth’s natural greenhouse effect.

“That is the Holy Grail of climatology,” said Roy Spencer, a principal research scientist in the ESSC, a former NASA scientist and Christy’s partner in the satellite thermometer project for more than 20 years. “How much of that underlying trend is due to greenhouse gases? While many scientists believe it is almost entirely due to humans, that view cannot be proved scientifically.”

When the first MSU went into orbit in 1978, it wasn’t designed for monitoring long-term changes in the climate. Instead, it was built to give meteorologists two temperature readings a day over about 96 percent of the planet to provide input into computerized weather prediction models, the forerunners of climate models.

While the satellite data record is shorter than the surface thermometer record, it has several strengths. It has the greatest global coverage: With 96 percent coverage of the globe (except for small areas around the north and south poles), the satellite sensors cover more than twice as much of Earth’s surface as do thermometers.

It is also less likely than surface-based thermometers to be influenced by local development, Spencer said. Urbanization typically contributes to local warming due to the asphalt effect, when paving and buildings absorb and convert into heat sunlight that would naturally have been reflected back into space.

While that heat can raise temperatures recorded by thermometers at surface weather stations, the effect on the atmosphere is so local and so shallow that it dissipates before it can heat the deep atmosphere above it. As a result, satellite measurements have shown no indication of an urban contamination effect, Spencer said.

Another strength is that the microwave sensors gather temperature data for a deep layer of the atmosphere, rather than just at the surface.

“What we look at is a bulk measurement of the atmosphere’s heat content,” Christy said. “That is the physical quantity you want to measure to best monitor changes in the climate. Plus, it’s consistent. You can take a single satellite ‘thermometer’ and measure the temperature of the whole Earth, rather than just at a single spot.”

While the satellite dataset has its strengths, unlike thermometers and temperature probes used on weather balloons the Microwave Sounding Units were new, largely untested tools when they were put into space. Spencer, Christy and other scientists have had to develop small corrections that they use every month to reduce errors caused by the satellites losing altitude or drifting in their orbits.

If both instruments are accurate, that means something unexpected is happening in the atmosphere.

“The satellites should have shown more deep-atmosphere warming than the surface, not less” he said. “Whatever warming or cooling there is should be magnified with height. We believe this is telling us something significant about exactly why the climate system has not warmed as much as expected in recent decades.”

Publication of the November 2011 Global Temperature Report was delayed by several days due to a ground station malfunction.

As part of an ongoing joint project between UAHuntsville, NOAA and NASA, Christy and Spencer use data gathered by advanced microwave sounding units on NOAA and NASA satellites to get accurate temperature readings for almost all regions of the Earth. This includes remote desert, ocean and rain forest areas where reliable climate data are not otherwise available.

The satellite-based instruments measure the temperature of the atmosphere from the surface up to an altitude of about eight kilometers above sea level. Once the monthly temperature data is collected and processed, it is placed in a “public” computer file for immediate access by atmospheric scientists in the U.S. and abroad. 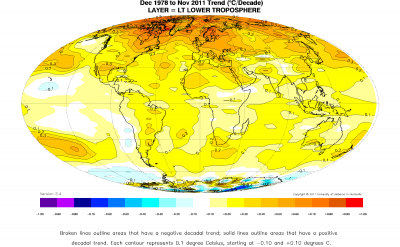