Good Information -- It’s Not All About the Brain 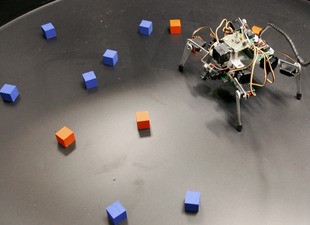 This mobile quadruped was one of three real and simulated robots used in the study.

Newswise — A neuroscientist from Indiana University and a roboticist from the University of Tokyo have created a new way to objectively quantify an idea that philosophers, educators and psychologists have discussed for decades -- that the many ways in which our bodies interact with our environment produces better information that helps the brain. Olaf Sporns, associate professor in the Department of Psychological and Brain Sciences at IU Bloomington, and UT's Max Lungarella used real and simulated robots in Sporns' Computational Cognitive Neuroscience Laboratory to create this mathematical framework, which they consider the first step toward the development of an explicit quantitative framework that unifies neural and behavioral processes.

Their findings, published in the journal Public Library of Science Computational Biology on Oct. 27, could provide insight into how the brain operates and shed light on how it may have evolved, Sporns said.

"Really, this study has opened my eyes," Sporns said. "I'm a neuroscientist, so much of my work is primarily concerned with how the brain works. But brain and body are never really separate, and clearly they have evolved together. The brain and the body should not be looked at as separate things when one talks about information processing, learning and cognition -- they form a unit. This holds a lot of meaning to me biologically."

An example of this union is how body morphology (the structure of sensors such as the eyes, for example) played a role in the kind of sensory information produced by Sporns' robots, a role that could be precisely measured. The production of good information and how an organism acts on it ultimately could mean the difference between survival and extinction. Sporns can see the mathematical framework, as it develops, being used for designing more capable robots and as a tool in basic research on how organisms have evolved.

A classical view of cognition is one of inputs and outputs -- the brain receives information to process and then produces an output -- all independent of the rest of the body as if the brain were a machine or computer. Philosophers such as educational reformer John Dewey have argued long ago that "doing" is a key part of learning, espousing the influence of a person's engagement in his or her environment on cognition. Any living thing with a nervous system is continually interacting with its environment, Sporns said. He and others in the growing field of embodied cognition think this interaction leads to better and more information. Quantifying this neural-behavioral relationship, however, has been difficult, if not impossible, until recent mathematical advances let Sporns and others begin to create critical measurement tools.

Sporns and Lungarella measured the information flow from the environment to a series of robots, and then from the robots back to the environment by recording what the robots saw and what they did. They altered the robots' visual sensors during the study by changing the density and spatial arrangement of their photoreceptors. At times, they also disrupted the coupling between the robots and their environment. They also looked at it in a simple learning context by including a "rewarding object" component to the study design. Sporns and Lungarella consistently found that well-coordinated and learned actions of the robots created additional structure in their own sensory inputs. This additional structure may be used by the brain to more efficiently process information.

"When it comes to information processing, brain and body work together. If this insight is correct, there is a strong message here for how we might understand the human mind, and for how we might go about designing artificial intelligence," Sporns said.

The research was funded by the Japanese Society for the Promotion of Science and by the James S. McDonnell Foundation.