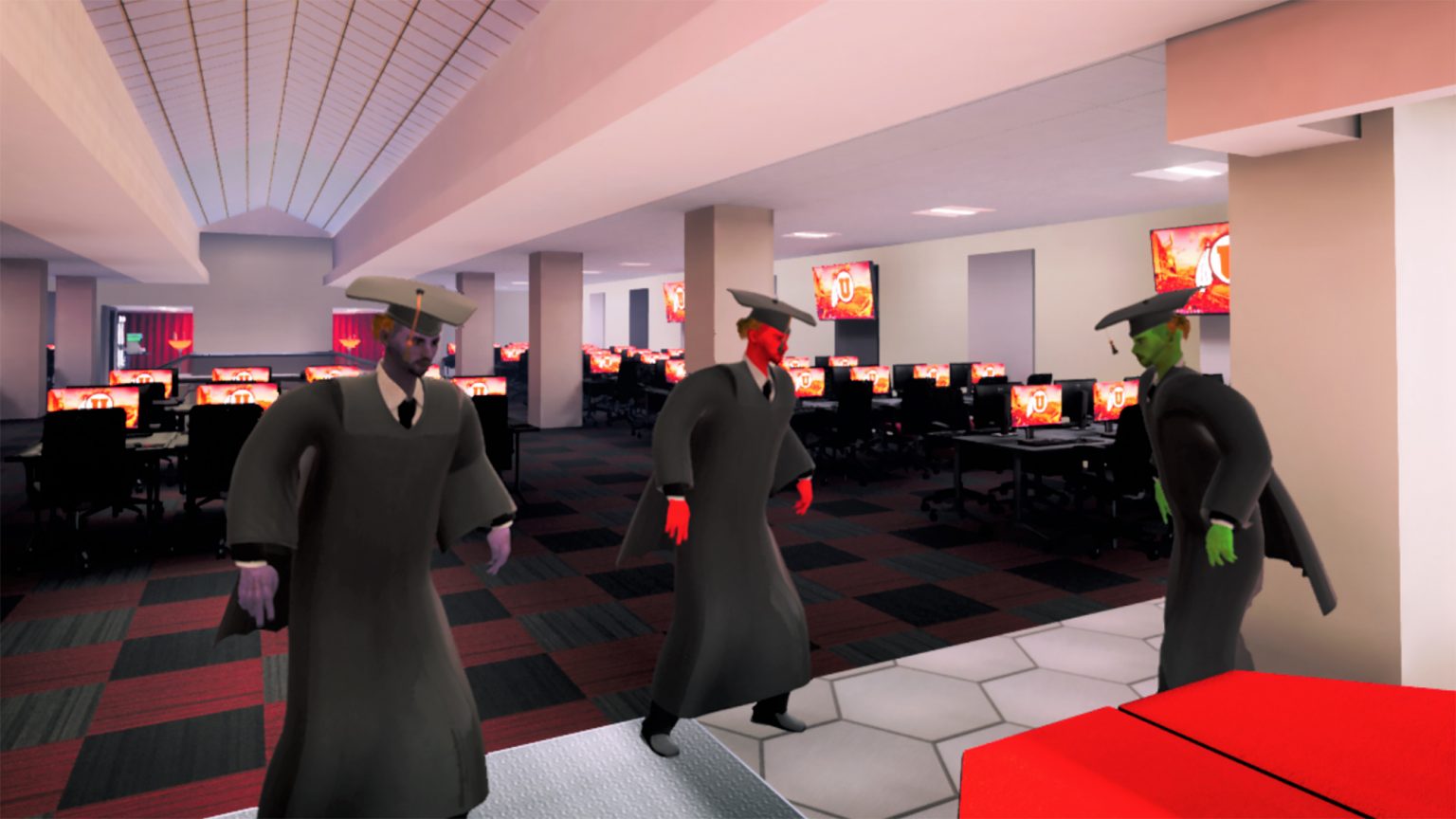 The University of Utah's nationally-ranked video game development program, Entertainment Arts & Engineering, is holding its 2020 graduation ceremony in an online video game students created. The game, similar to a massively multiplayer online game, allows students to log in and control a 3D avatar of themselves marching through the ceremony.

Newswise — April 30, 2020 — While colleges around the country have cancelled their graduation ceremonies due to the COVID-19 pandemic, seniors and graduating master’s students from the University of Utah’s Entertainment Arts and Engineering (EAE) games program are still holding their convocation in the best way they know how – in an online video game they built specifically for the ceremony.

On Friday, May 1, EAE’s 2020 graduating class will log into a virtual 3D recreation of the program’s campus studio and participate in a first-person, interactive version of a graduation ceremony. Unlike popular massively multiplayer online (MMO) games where players solve puzzles and collaborate on quests, these graduating students – more than 200 of them – will walk in a procession, listen to speakers and receive their graduation cords like they would in a real-world convocation. The event will also be streamed live on the University of Utah’s Twitch channel at https://twitch.tv/UniversityOfUtah so family and friends can watch. The master’s students’ ceremony will begin about 9:30 a.m. MDT while the seniors’ ceremony begins about 2 p.m. MDT.

“We needed to have something special for the students because this may be the end of their academic careers, and we wanted them to leave on a high note,” said University of Utah School of Computing professor Robert Kessler, who is also EAE’s co-founder and executive producer of the virtual event. “And we’re games people, so we said, ‘Let’s make a game.’”

When each ceremony begins, graduating students can log in with their home computers and choose their 3D avatars, complete with graduation cap and gown, which students can decorate with art from their games. It was important to the student and faculty developers that the game encourages customization so graduates feel like this was their moment.

Graduates will walk their in-game avatars through a faithfully recreated 3D version of the EAE building where they took most of their classes – located just north of the U’s new law school – that includes meeting rooms, tables, chairs, poster art, TV screens, even the building’s bathrooms. There will be speeches from EAE leadership, students will be individually called up, and they will be recognized for their incredible achievements from their years at Utah.

Kessler and three students, Light Bates, Doug Hawthorn and Jacob Nielsen, worked tirelessly over two weeks, leveraging their expertise in the Unreal game engine, 3D modeling and animation, and game design that the students learned from EAE’s program. One student built the 3D version of the EAE building using the video game engine Unreal Engine 4, the same software used to make games like “Borderlands” and “Fortnite.” EAE’s esports production team that streams the U’s esports matches on Twitch is producing the live stream of the event. The EAE development team leveraged the SpatialOS multiplayer networking tool to quickly support hosting of the large numbers of students, faculty and staff that will be live in the game.

“So much of what we teach students is about community and being part of teams, being part of the EAE family,” said R. Michael Young, director of EAE. “To have something where we came together to acknowledge our students’ accomplishments was important. It was so natural to put it into a game.”

Entertainment Arts and Engineering, under the U’s College of Engineering, launched in 2007 and has quickly become one of the most highly regarded video game development programs in the world. This year, EAE was ranked the No. 1 public university in games worldwide, according to the latest rankings by The Princeton Review. The program is known for graduating top-notch students that are sought after by the games industry.