Graphene-Based Sensor Could Improve Evaluation, Diagnosis and Treatment of Asthma 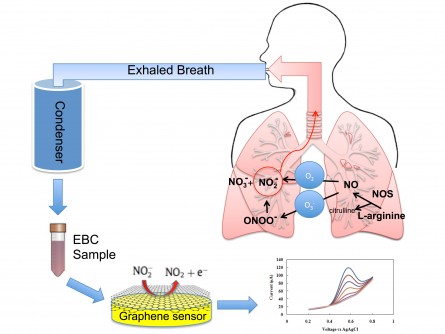 Exhaled breath condensate (tiny droplets of liquid) are rapidly analyzed by a graphene-based nanoelectronic sensor that detects nitrite, a key inflammatory marker in the inner lining of the respiratory airway.

Newswise — Rutgers University-New Brunswick scientists have created a graphene-based sensor that could lead to earlier detection of looming asthma attacks and improve the management of asthma and other respiratory diseases, preventing hospitalizations and deaths.

The sensor paves the way for the development of devices – possibly resembling fitness trackers like the Fitbit – which people could wear and then know when and at what dosage to take their medication.

“Our vision is to develop a device that someone with asthma or another respiratory disease can wear around their neck or on their wrist and blow into it periodically to predict the onset of an asthma attack or other problems,” said Mehdi Javanmard, an assistant professor in the Department of Electrical and Computer Engineering. “It advances the field of personalized and precision medicine.”

Javanmard and a diverse team of Rutgers-New Brunswick experts describe their invention in a study published online today in the journal Microsystems & Nanoengineering.

Asthma, which causes inflammation of the airway and obstructs air flow, affects about 300 million people worldwide. About 17.7 million adults and 6.3 million children in the United States were diagnosed with asthma in 2014. Symptoms include coughing, wheezing, shortness of breath, and chest tightness. Other serious lung ailments include chronic obstructive pulmonary disease (COPD), which encompasses emphysema and chronic bronchitis.

Today’s non-invasive methods for diagnosing and monitoring asthma are limited in characterizing the nature and degree of airway inflammation, and require costly, bulky equipment that patients cannot easily keep with them. The methods include spirometry, which measures breathing capacity, and testing for exhaled nitric oxide, an indicator of airway inflammation. There’s an urgent need for improved, minimally invasive methods for the molecular diagnosis and monitoring of asthma, the study says.

Measuring biomarkers in exhaled breath condensate – tiny liquid droplets discharged during breathing – can contribute to understanding asthma at the molecular level and lead to targeted treatment and better disease management.

“Nitrite level in breath condensate is a promising biomarker for inflammation in the respiratory tract. Having a rapid, easy method to measure it can help an asthmatic determine if air pollutants are affecting them so they can better manage use of medication and physical activity,” said Clifford Weisel, study co-author and professor at Rutgers’ Environmental and Occupational Health Sciences Institute (EOHSI). “It could also be used in a physician’s office and emergency departments to monitor the effectiveness of various anti-inflammatory drugs to optimize treatment.”

“Increases in airway inflammation may be an early warning sign of increased risk of an asthma attack or exacerbation of COPD, allowing for earlier and more-effective preventive measures or treatment,” said Robert Laumbach, study co-author and an occupational and environmental medicine physician at EOHSI.

“Just looking at coughing, wheezing and other outward symptoms, diagnosis accuracy is often poor, so that’s why this idea of monitoring biomarkers continuously can result in a paradigm shift,” said Javanmard, who works in the School of Engineering. “The ability to perform label-free quantification of nitrite content in exhaled breath condensate in a single step without any sample pre-treatment resolves a key bottleneck to enabling portable asthma management.”

The next step is to develop a portable, wearable system, which could be commercially available within five years, he said. The researchers also envision expanding the number of inflammation biomarkers a device could detect and measure.

“In the U.S. alone, allergy inflammation, asthma and various respiratory conditions are all on the rise, so devices that can help diagnose, monitor and manage these conditions will be in high demand,” Javanmard said.