Award recognizes lifetime achievement in the field of genetics 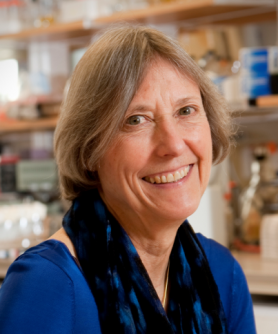 Newswise — BETHESDA, MD – The Genetics Society of America (GSA) is pleased to announce that Nancy Kleckner, PhD (Harvard University), has been awarded the Society's Thomas Hunt Morgan Medal for lifetime achievement in the field of genetics. The award recognizes Dr. Kleckner's many significant contributions to our understanding of chromosomes and the mechanisms of inheritance. “Nancy has made major contributions both to understanding how chromosomes work and to developing transformative methodology that has changed the way that others do science and the types of molecular and cellular events that can be observed and measured,” said Anne Villeneuve, PhD, Professor of Developmental Biology and Genetics at Stanford University.

Dr. Kleckner has made seminal achievements in several different research areas, including bacterial transposition, chromosome organization, and meiosis. She has repeatedly combined traditional genetic approaches with molecular biology, microscopy, physics, and modeling—unprecedented applications of these methods at the time, but which have now become commonplace. Indeed, she is widely recognized as one of the leaders in bringing meiosis research into the modern era. Notably, her lab played a key role in elucidating the mechanism that initiates meiotic recombination, has helped to decipher the “strand gymnastics” of recombination, and is beginning to provide insight into the enigmatic phenomenon of crossover interference.

In addition to her many scientific achievements, Dr. Kleckner is also recognized as a mentor to many graduate students and postdocs who have, themselves, become research leaders in their own fields. She creates an environment where trainees are encouraged to take on challenging, but potentially transformative, projects and to reach beyond conventional thinking. Scott Keeney, a former postdoc with Dr. Kleckner who is now an HHMI Investigator and Member of the Memorial Sloan Kettering Cancer Center, described her “trademark features: exceptional insight into complex biological problems; incisive and often highly innovative approaches; fearless attack on intellectual challenges few if any others could tackle; and rigorous experimentation.”

Dr. Kleckner has also provided leadership within the community including service on the GSA Board of Directors and on the editorial boards of various scientific journals, including the GSA journal GENETICS. She helped establish the Gordon Research Conference on Meiosis, the Woods Hole Workshop on Site-Specific Recombination and Transposition, and the Keystone Symposium on Bacterial Chromosomes. She is a member of the National Academy of Sciences and an elected Fellow of the American Academy of Arts and Sciences, the American Association for the Advancement of Sciences, and the American Academy of Microbiology. In 1990, she received the GSA Medal for her early contributions to the field.

The Thomas Hunt Morgan Medal is awarded to an individual GSA member for lifetime achievement in the field of genetics. It recognizes the full body of work of an exceptional geneticist. The Medal was established by GSA in 1981 and named in honor of Thomas Hunt Morgan (1866–1945), who won the Nobel Prize in 1933 for his studies of Drosophila chromosomes and their role in heredity.

The award will be presented to Dr. Kleckner at The Allied Genetics Conference, July 13–17, 2016, in Orlando, Florida.

Founded in 1931, the Genetics Society of America (GSA) is the professional scientific society for genetics researchers and educators. The Society’s more than 5,500 members worldwide work to deepen our understanding of the living world by advancing the field of genetics, from the molecular to the population level. GSA promotes research and fosters communication through a number of GSA-sponsored conferences, including regular meetings that focus on particular model organisms. GSA publishes two peer-reviewed, peer-edited scholarly journals: GENETICS, which has published high quality original research across the breadth of the field since 1916, and G3: Genes|Genomes|Genetics, an open-access journal launched in 2011 to disseminate high quality foundational research in genetics and genomics. The Society also has a deep commitment to education and fostering the next generation of scholars in the field. For more information about GSA, please visit www.genetics-gsa.org.