GuLF STUDY Gears Up for Second Round of Health Exams 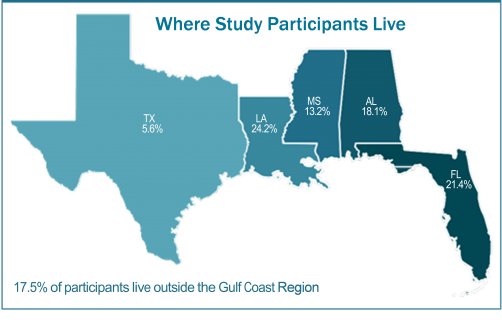 A map of GuLF STUDY participants

Newswise — Researchers at the National Institutes of Health, leading the largest health study ever conducted on the potential health effects of an oil spill, are encouraging participants to stay involved in this long-term project. All participants are being contacted for telephone interviews to update their health status. Those living within 60 miles of Mobile, Ala., and New Orleans also will be invited to take part in a second comprehensive health exam.

Preliminary observations from the first health exam indicated that clean-up workers were about 30 percent more likely to have moderate to severe depression than residents who did no clean-up work. Results were similar for anxiety.

“It’s important that the 33,000 people enrolled in this study stay involved, because these early findings need to be followed up over time,” said Dale Sandler, Ph.D., lead researcher for the GuLF STUDY. “At this point, it is hard to know if the increased frequency of depression and anxiety in workers is because of exposure to oil and dispersants, or something else about the oil spill experience and its aftermath.”

Sandler explained that the research team initially focused on the mental health effects of the spill because high levels of anxiety, depression, and stress were frequently reported after this and other disasters.

“People in Gulf communities have been through so much,” Sandler said. “Many have lost their jobs, and there is a lot of general everyday stress and uncertainty in their lives.”

Sandler heads the Epidemiology Branch at the National Institute of Environmental Health Sciences (NIEHS), part of NIH. “We know that everyone wants answers now, and we do, too. But it’s important to remember that the GuLF STUDY is intended to be a 10-year study.”

The GuLF STUDY (Gulf Long-term Follow-up Study) was launched by NIH in 2010, following the Deepwater Horizon drilling rig explosion. People all along the Gulf Coast and others throughout the country were trained, with support from NIEHS and other federal agencies, to safely assist with the clean-up efforts. Many of these workers are now enrolled in the GuLF STUDY.

NIEHS announced that it has partnered with health clinics at the University of South Alabama College of Medicine and Louisiana State University Health Sciences Center School of Medicine to conduct the second round of health exams. The exams will focus on neurological, respiratory, and mental health issues. Although the exams are being conducted for research purposes, participants will receive results of blood pressure, cholesterol, and diabetes screenings. Participants will be referred for health care as needed. From the first health exam, more than 500 people were referred to primary care providers for health concerns.

Sandler said the team is also using questionnaire data and blood samples to understand the relationships between clean-up work, exposure to oil-related chemicals and dispersants, and physical symptoms.

She also indicated that workers reported more health symptoms, such as wheezing and cough, than non-workers, and some workers were still experiencing these symptoms up to three years after the spill. It is still too soon to determine if clean-up experiences and exposures are leading to increases in chronic diseases, such as lung disease or cancer, or whether any short-term symptoms persist or will dissipate over time.

“The bottom line is we really need the GuLF STUDY participants to stay engaged. If they haven’t already done so, we encourage them to call 1-855-NIH-GULF (1-855-644-4853) to schedule their follow-up interview and to participate in the health exam and other study activities,” Sandler said.

For more information about the GuLF STUDY, visit http://www.gulfstudy.nih.gov.GuLF STUDY is a registered trademark held by the National Institute of Environmental Health Sciences.

NIEHS supports research to understand the effects of the environment on human health and is part of NIH. For more information on environmental health topics, visit http://www.niehs.nih.gov. Subscribe to one or more of the NIEHS news lists (www.niehs.nih.gov/news/releases/newslist/index.cfm) to stay current on NIEHS news, press releases, grant opportunities, training, events, and publications.